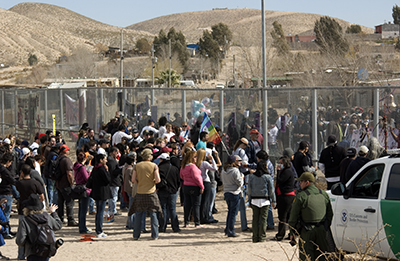 With the May 23rd cancelation of Title 42 – the last functioning border enforcement mechanism still in place – looming, Homeland Security Secretary Alejandro Mayorkas issued what he described as DHS’s “Plan for Southwest Border Security and Preparedness.” The plan stands out as perhaps the most audacious insult to the intelligence of the American public ever perpetrated by a public official.

The first two sentences the secretary’s April 26 memo are replete with blatant falsehoods. “Under the Biden-Harris Administration the Department of Homeland Security has been executing a comprehensive and deliberate strategy to secure our borders and build a safe, orderly, and humane immigration system,” he states. In the next sentence he goes on to claim that the border crisis is the fault of the previous administration. “After inheriting a broken and dismantled immigration system, since January 2021 DHS has effectively managed an unprecedented number of noncitizens seeking to enter the United States and interdicted more drugs and disrupted more smuggling operations than ever before.” His misrepresentations were so blatant that even the Washington Post’s fact-checker called him a liar.

Mayorkas then went on to outline six “border security pillars” that his department is implementing to deal with a surge that they estimate could see 18,000 illegal aliens pouring across the southern border each day. Notably, none of the six pillars includes deterring or preventing the anticipated surges.

Pillar 1: We are surging resources, including personnel, transportation, medical support, and facilities to support border operations. What he goes on to describe, in evasive language, is how these additional resources will be used to process larger numbers of migrants more quickly, release them from custody, and provide them transportation to their desired destinations within the United States.

Pillar 2: We are increasing CBP processing efficiency and moving with deliberate speed to mitigate potential crowding at Border Patrol stations and to alleviate the burden on surrounding border communities. Translation: Do everything in DHS’s power to avoid the bad optics of overcrowded detention facilities and migrants overwhelming local communities.

Pillar 3: We are administering consequences for unlawful entry, including removal, detention and prosecution. Presumably with a straight face, Mayorkas writes, “Core to this plan is to continue to strictly enforce our immigration laws,” perhaps hoping that no one will remember that his own policies explicitly state that DHS will not enforce our immigration laws. In reality, any charges for illegal entry will be dropped and those released will face absolutely no consequences.

Pillar 4: We are bolstering the capacity of non-governmental organizations to receive noncitizens after they have been processed by CPB…And we are ensuring appropriate coordination with and support for state, local and community leaders to help mitigate the impact on their communities. Translation: DHS will funnel taxpayer dollars to open borders advocacy groups, while continuing to transport migrants (often in the dead of night) whether local officials or residents like it or not.

Pillar 5: We are targeting and disrupting the transnational criminal organizations and smugglers who take advantage of and profit from vulnerable migrants, and who seek to traffic drugs into our country. In fact, his policies are doing precisely the opposite: vastly enriching criminal cartels, endangering the lives of more migrants to place themselves in the hands of ruthless criminals, and creating more border chaos that will make it even easier for drug traffickers to succeed.

Pillar 6: We are deterring irregular migration south of our border, in partnership with the Department of State and other federal agencies and nations throughout the Western Hemisphere. The fact that they are expecting 18,000 people a day to make their way to the border belies the assertion that DHS is deterring “irregular migration.” Moreover, Biden and Mayorkas inherited cooperative agreements with Central American governments and with Mexico and promptly canceled them upon assuming office. Moreover, DHS is openly defying a court order to restore the Remain in Mexico policy, returning only 3,000 migrants to Mexico during the first five months after the judicial ruling, and continuing efforts to formally terminate the program.

Mayorkas faced withering criticism in subsequent testimony before House and Senate committees after the release of his plans, including from Democratic members of Congress. Nevertheless, Mayorkas and the Biden administration remain steadfast in their determination to scrap Title 42.

Editor’s note: This edition of the newsletter was completed prior to May 23, the date set for ending Title 42.