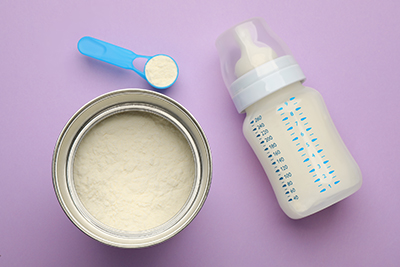 It is getting hard to keep a tally of the crises the American public is facing under the Biden administration. The latest is a shortage of infant formula. In mid-May, 40 percent of American retailers reported they were out of stock of formula, while the remainder had only limited supplies. Some 75 percent of American babies receive at least some formula by the time they reach six months. Thus, a New York Times headline, “A Baby Formula Shortage Leaves Desperate Parents Searching for Food,” was not hyperbole.

But while American parents were literally panicking about the health of their babies, one group of infants were insulated from the crisis. You guessed it. Babies who were brought to the United States illegally during the ongoing Biden Border Crisis had all the formula they needed. 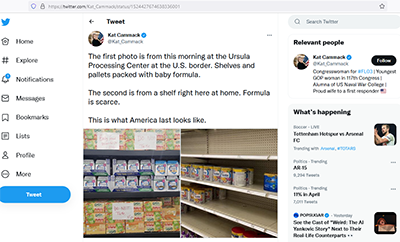 Rep. Kat Cammack (R-Fla.) found that while American parents faced empty infant formula shelves at their supermarkets and pharmacies, the Ursula Migrant Processing Center in McAllen, Texas, had pallets of vital food available to meet the needs of migrants with babies. Other migrant processing facilities along the besieged border were similarly well-stocked, claimed the congresswoman. “All these processing facilities are receiving pallets of baby formula,” with more on the way. In a Facebook video post, Cammack called it “another example of the America last agenda that the Biden administration continues to perpetuate.”

Clearly no baby, regardless of immigration status, should have to go without proper nutrition. But, as is so often the case with this administration, when faced with scarce resources, the needs of illegal aliens are always paramount, even when the needs of the most vulnerable Americans take a back seat.