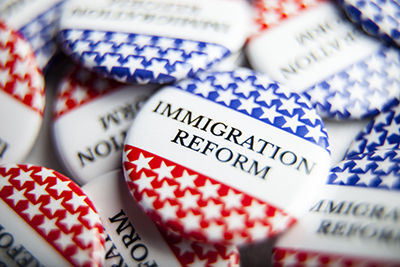 In Joe Biden’s first year and a half in office he has perpetrated an unprecedented immigration disaster on the American people: dangerously open borders, massive abuse of our asylum system, and a de facto halt to all immigration enforcement in the interior of the country. His disastrous policies have also given rise to an emerging coalition of organizations demanding true reform to our nation’s broken immigration policies, of which FAIR is a leading member.

The deliberately inflicted immigration disaster has alarmed the American people and a wide coalition of interest and policy groups that now recognize that virtually every public interest is being put at risk. In May, a core group of 15 prominent public policy groups joined former high level Department of Homeland Security (DHS) officials and others, in signing a letter to congressional leaders demanding that immigration enforcement legislation be a top priority for the 118th Congress when it convenes next January.

It seems all but certain that the midterm elections will result in new leadership in Congress next year that will have the power to bring legislation to the floors of both houses, and to exercise oversight over the actions of a rogue administration that is subverting our immigration laws. “When the 118th Congress opens with new majorities in both chambers, it will be in large part because Americans have rejected the Biden Administration’s purposeful dismantling of our nation’s borders and our immigration enforcement infrastructure. Congress should be emboldened with the mandate to immediately legislate unflinchingly, ensuring that neither this nor any future administration is again able to weaponize loopholes in the immigration system—and defiantly refuse to follow plain law—to purposefully drive mass illegal immigration to the United States,” the letter states.

The letter lists specific legislative measures that must be taken to restore control over our borders, end the abuses of our asylum laws, and prevent this and future administrations from nullifying laws by refusing to enforce them. The letter also takes aim at Republicans who have sought to leverage enforcement measures to deliver amnesty and cheap labor demanded by the U.S. Chamber of Commerce and other special interests. The letter makes clear that in light of the existing immigration crisis, amnesty for illegal aliens must be off the table.

The list of legislative reforms are those that FAIR has advocated for years. The actions of the Biden administration have created a new urgency and unprecedented broad support for enacting them. In the months between now and the beginning of the 118th Congress, FAIR will be working to further broaden that coalition and hit the ground running in 2023.