As the Biden Border Crisis raged out of control in May, FAIR called for the resignation or removal of Alejandro Mayorkas as Secretary of the Department of Homeland Security (DHS). Mayorkas took an oath “to defend and secure our country” when he was sworn in as secretary of DHS on February 2. However, he has failed to live up to that commitment and has instead presided over the reckless abandonment of border security and immigration enforcement. Moreover, he has shown no inclination to faithfully carry out his duties in the future.

In a statement calling for Mayorkas to step down or to be removed, FAIR President Dan Stein charged that “it is clear that Mayorkas will not secure the border or enforce the overwhelming majority of our nation’s immigration laws. Thus, every day that he remains secretary of DHS, he is consciously violating his oath of office. President Biden must ignore the open-borders puppeteers he has been surrounded with and terminate Secretary Mayorkas immediately. Time is running out.” 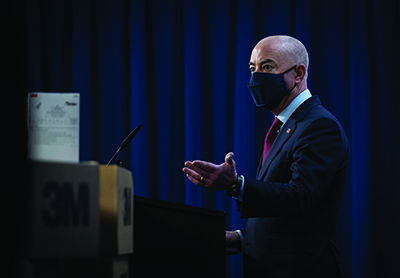 FAIR is not alone in calling for Mayorkas’ ouster. Three former high-ranking DHS officials also issued a statement charging that the secretary is in dereliction of his duty. “Mayorkas has shown that he is the wrong person to lead the Department of Homeland Security. Rather than providing the support and tools his agencies need to execute their fundamental missions, he has created an unmitigated crisis where both immigration enforcement and border security are almost non-existent,” wrote former deputy DHS Secretary Ken Cuccinelli, former acting Customs and Border Protection (CBP) Commissioner Mark Morgan and former acting Immigration and Customs Enforcement Director Tom Homan. Morgan is now a senior fellow with FAIR.

Mayorkas is taking heat not only from groups like FAIR and former DHS officials for his and the Biden administration’s handling of the border crisis. Democratic Congressman Henry Cuellar, who represents a south Texas district, rebuked Mayorkas and the administration for pie in the sky efforts to address the root causes of migration in Central America while at the same time doing their best not to enforce immigration laws. “They got to look at certain things, and it might be uncomfortable talking about what needs to be done, but it has to be done,” he said. “If that’s the law, then you got to follow the law. You can’t pick and choose what part of the law you want to enforce.”

At a Senate hearing in May, Mayorkas was excoriated for his and the administration’s refusal to even acknowledge that there is a crisis at the border, and his efforts to pin the blame for the situation on the Trump administration. Senator Mitt Romney (R-Utah), certainly no immigration enforcement hawk or an ally of former President Trump, tore into Mayorkas for both his job performance and his lack of forthrightness with Congress and the American public. “What I find astonishing…is that we have the secretary responsible for securing our border and immigration system who doesn’t recognize [the soaring levels of illegal immigration] as being a problem…I find that extraordinary and extremely damning,” Romney said.

Mayorkas’ effort to shift the blame for the migration surge also infuriated Ohio Republican, Rob Portman. In his testimony, Mayorkas charged that the Trump administration did nothing to address the surge last spring and tore down programs that could “help alleviate the pressure” at the border. Noting that the policies in place under the previous administration had dramatically reduced illegal migration, Portman retorted that he could not sit in the hearing “and not comment on this idea that somehow this is Donald Trump’s fault.”

Of course, while Mayorkas fully deserves to be removed from the helm of DHS, doing so would not entirely solve the problem. The problem begins in the Oval Office with a president who has done everything in his power to eviscerate immigration enforcement and encourage illegal migration. However, a new secretary who is prepared to honor his or her oath to safeguard the homeland might provide the president with better advice and place his or her duty to the American people ahead of loyalty to the president.