In his April address to the nation, President Joe Biden laid out his very costly agenda for the country. Among the key targets of his proposed spending spree were addressing the nation’s homelessness crisis and providing tuition-free college education to everyone in the country.

There is, of course, another pressing crisis that the president failed to acknowledge for the obvious reason that his own policies created it: The raging illegal immigration crisis at our southern border on top of the 14.5 million illegal aliens who were already here when he took office.

The scope of the nation’s homelessness crisis is evident to just about everybody who lives in a major urban area, where highway underpasses and public parks are turned into homeless encampments. Yet, despite the urgent need to move people off the streets, the Biden administration announced plans to allow illegal aliens to tap into an emergency $5 billion federal fund to provide people with housing vouchers. The $5 billion fund was part of the $1.9 trillion COVID relief bill approved by Congress in March.

When asked if illegal aliens should be barred from accessing these vouchers, Marcia Fudge, the secretary of Housing and Urban Development (HUD), stated succinctly, “The answer is no.” “We are doing everything we can possibly to take any living person in this nation off the streets. That’s kind of our posture,” she added. 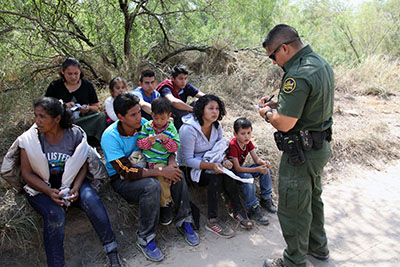 Thus, homeless veterans, Americans who have lost jobs and their homes due to the COVID unemployment crisis, or who have faced some other misfortune, will have to compete with illegal aliens (some of whom may have just snuck across the border) for taxpayer-funded housing vouchers.

But wait, there’s more! To alleviate some of the financial burdens on American students, some of whom are struggling to pay tuition or keep a roof over their heads, the COVID relief package includes funding to assist them. In May, the Biden Department of Education (ED) issued new rules permitting illegal aliens enrolled in a U.S. college or university to access these emergency assistance funds. The ED rules make it clear that all illegal aliens – not just those who are protected under the Deferred Action for Childhood Arrivals (DACA) program – are eligible.

In a statement, the ED asserted that illegal alien students “are no less deserving” of assistance than struggling American students and legal immigrants. The new ED rule notes, “In their capacity as students, undocumented persons, like all postsecondary students, pursue degrees, obtain employment commensurate with their educational attainment and, in doing so, contribute to the greater good of the economy and society as a whole. The department has been persuaded… that there is no good policy reason to treat them differently.”

According to President Biden’s own statements in his address to the nation, two of the most pressing crises facing the United States that he seeks to address in his massive new infrastructure proposal are widespread homelessness and the crushing burden of college education costs on American families. However, he is hampering these goals by simultaneously implementing immigration policies that encourage a new wave of mass migration that make both new and long present illegal aliens eligible to receive funds that we intended to address that crisis.