Over the past 20 years, Arizona voters have repeatedly approved ballot measures (by substantial margins) intended to discourage illegal immigration. The will of the voters has been repeatedly upheld by the courts in the face of legal challenges to these measures. In other words, the message of the voters has been pretty clear – they want illegal immigration deterred. But many politicians in Arizona are still not getting the message.

In May, the Arizona House approved a ballot referral called S.C.R. 1044 which will put in-state tuition for illegal aliens at community colleges and state universities on the 2022 ballot. The ballot referral passed 33-27 in the House, with four Republicans joining the 29 minority Democrats. The Arizona Senate passed the measure in March with three Republicans and 14 Democrats supporting. The Legislature’s push to reopen the possibility of in-state tuition will force Arizona taxpayers to defend a measure they approved in 2006 barring such benefits. Proposition 300 was approved by 71 percent of Arizona voters in 2006. Additionally, in 2018, the state supreme court determined that DACA recipients were ineligible for instate tuition subsidies.

FAIR is working with members and activists in Arizona to fight this latest effort to grant illegal aliens expensive benefits – even after voters have repeatedly said no. 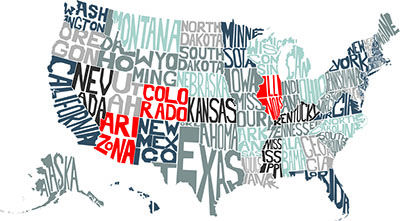 The Colorado Legislature is considering a historic number of bills aimed at extending public benefits, services and protections to illegal aliens. Most notably, Senate Bill 199 would make illegal aliens eligible for all benefits that are not explicitly excluded under federal

law. House Bill 1150 would establish the Colorado Office of New Americans, to coordinate services and benefits for immigrants (including illegal aliens if SB 199 is enacted). House Bill 1194 would provide publicly funded legal counseling to people in immigration proceedings (even though American citizens are required to pay for their own legal representation in civil matters). Also on the legislative docket is Senate Bill 131, which would further solidify Colorado’s status as a sanctuary state by barring state agencies from sharing information about people’s immigration status. Senate Bill 77, would allow illegal aliens to get professional licenses (even though federal law prohibits them from working in the United States.

Dreaming up new benefits and services to provide illegal aliens seems to be the reason many Illinois legislators get out of bed in the morning. And, in 2021, those members of the Legislature have plenty of reasons to arrive at the State Capitol bright-eyed and bushy-tailed. In the current session, Senate Bill 225 has been approved by the Senate and is awaiting action

in the House. The bill bars state agencies from providing facial recognition searches or photographs obtained in the process of issuing driver’s licenses or ID cards to any government entity for purposes of enforcing federal immigration laws. Senate Bill 1986 would enhance Illinois’ already rigorous sanctuary laws, including imposing a ban on state and local law enforcement officers from inquiring about anyone’s citizenship or immigration status or birthplace, even if they’re detained or arrested, unless provided with a judicial warrant or other court order.