President Biden has done just about everything he can to eliminate any vestiges of border and immigration enforcement (although he still may have a few tricks left up his sleeve). But the Holy Grail of full amnesty and a pathway to citizenship for just about every illegal alien in the United States is now tantalizingly just beyond the reach of the president and his allies in Congress.

The roadblock to passage of a sweeping illegal alien amnesty is in the Senate, where under longstanding rules of the chamber, 60 votes are needed to bring a bill to the floor for a vote. The current 50-50 split means that a united Democratic caucus would need to swing ten Republican members to their side to reach the 60 vote mark. That is unlikely to happen. However, a new tactic is emerging in pursuit of an all-encompassing amnesty for millions of illegal aliens. Majority Leader Chuck Schumer (D-N.Y.), pushed by woke radicals, big tech, and an unabashedly activist “news” media, is openly contemplating blowing up that Senate rule to achieve a legislative goal that has scant public support.

In May, Schumer began floating the idea of folding language that could grant millions of illegal aliens full amnesty into President Biden’s already pork-laden infrastructure bill and getting it passed with just 51 votes (most likely with Vice President Kamala Harris casting the 51st vote). Under a maneuver known as “budget reconciliation,” the Senate can skirt the cloture rule, which requires a 60-vote majority to bring a bill to the floor, [cloture actually ends debate] if the legislation in question would have a significant budgetary impact. 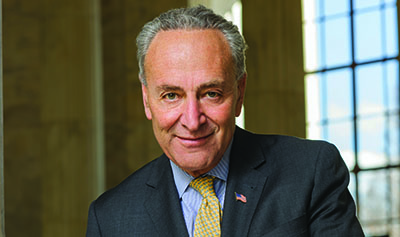 According to The New York Times, “Mr. Schumer has privately told members of the Congressional Hispanic Caucus in recent weeks that he is ‘actively exploring’ whether it would be possible to attach a broad revision of immigration laws to President Biden’s infrastructure plan and pass it through a process known as budget reconciliation” as activists grow “worried that Democrats may squander a rare opportunity to legalize broad swaths of the undocumented population while their party controls both chambers of Congress and the White House.”

Ironically, the massive amnesty contemplated by congressional Democrats and the Biden administration would have significant budgetary implications – incredibly harmful ones. Instead of increasing federal revenues, such an amnesty would result in a net fiscal drain of $6 trillion from government coffers over the lifespan of those receiving amnesty.

Second, Schumer’s gambit would test the elasticity of the Senate rule that requires amendments to bills to be germane to the legislation they are being attached to. Making the case that millions of illegal aliens can somehow be considered infrastructure would seem to exceed the bounds of what now passes for credulity in our nation’s capital.

Both of these questions would have to be determined by the Senate parliamentarian, should Schumer decided to go down that road. If he does, one of the most important legislative acts of our time could be left in the hands of Elizabeth MacDonough, an obscure, unelected bureaucrat who serves as Senate Parliamentarian.

The effort to pass an amnesty amid an immigration (and other foreign and domestic) crisis has little public backing. It does, however, have massive fire power behind it from the Democratic Party’s ascendant far-left wing, woke Silicon Valley billionaires, and an increasingly ideological media. FWD.us – the pro-amnesty organization bankrolled by tech titans, most notably Mark Zuckerberg – announced that they would be blasting TV airwaves with a $50 million ad campaign imploring lawmakers to use budget reconciliation to give a pathway to citizenship for some eight million illegal aliens.

The effort is also being cheered on by media pundits. Washington Post columnist Greg Sargent declared the (ab)use of reconciliation to be almost a religious duty. “Democrats need to be ready to act alone, God and the parliamentarian willing,” he wrote. The American public can only hope that, like God, Ms. MacDonough cannot be swayed by Silicon Valley dollars.