A slew of FAIR-endorsed bills are under consideration in the 2021 session of the North Carolina legislature. These bills would require state agencies to comply with ICE immigration detainers (SB 101); require the use of the federal Systematic Alien Verification for Entitlements (SAVE) database to prevent ineligible aliens from collecting public benefits (HB 29); mandatory use of E-Verify for all companies in the state employing more than five workers (HB 43); and banning sanctuary policies anywhere in the state (HB 62). The biggest hurdle for all of these

commonsense bills is getting past the veto pen of Democratic Gov. Roy Cooper. In the last session, Gov. Cooper (who faces reelection next year) vetoed legislation a bill similar to SB 101. 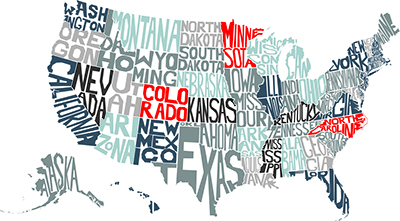 In the past few years, Colorado has moved in the direction of the most radical sanctuary states, approving driver’s licenses for illegal aliens, granting illegal aliens tenant protection, and a statewide sanctuary law that prevents state and local agencies from cooperating in many ways with federal immigration authorities. But even that is not good enough for illegal alien advocacy groups in Colorado. This legislative session, more immigration legislation is being considered including a bill, Senate Bill 131, to prevent Colorado officials from sharing personal

identification information (PII) with Immigration and Customs Enforcement (ICE). SB 131 includes measures in several categories to deliberately conceal PII from reaching federal immigration authorities. In addition, it prohibits the collection of some PII so agencies don’t have the information in the first place. The bill bars the sharing of any “information that may be used, along or in conjunction with any other information, to identify a specific individual.” SB 131 is currently being considered by a Senate committee.

Minnesota is one of the three states considering bills to grant driver’s licenses to illegal aliens. (The other two are Pennsylvania and Idaho, where the bills have little chance of passage.) House File 1163 was introduced by Democratic House Majority Leader Ryan Winkler in February and was quickly voted out of the House Judiciary Finance and Civil Law Committee, by a party-line 10-5 vote on February 26. The bill is now in the House Transportation Finance and Policy Committee. The effort faces tougher going in the Republican-controlled Minnesota Senate. No companion legislation has been introduced in that chamber, although the state’s powerful agricultural lobby is likely to pressure the Senate to act. Gov. Tim Walz, a vocal advocate for illegal aliens, would almost certainly sign the bill if it were to reach his desk.