The train wreck that is the Biden immigration policy begs explanation, expert analysis, factual information, and rational responses. As had been the case when previous administrations have mismanaged our immigration policies to the detriment of the national

interest, they have turned to FAIR to provide facts, analysis, and responses. That has once again been the case, as the Biden administration has engaged in active sabotage of the public interest on immigration. 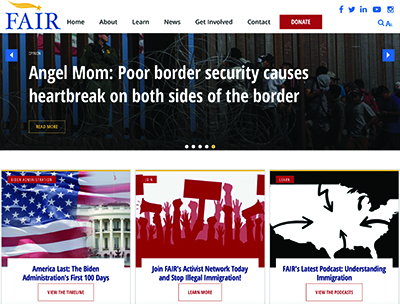 As a core component of our public education mission, FAIR has been the media’s go-to organization as they cover the border crisis that has unfolded since Day One of the Biden presidency. In just the first six weeks of the administration, FAIR spokespeople have spoken directly to the American public, appearing on:

Additionally, FAIR has had an unprecedented number of op-eds published in leading opinion journals and online publications – 11 in the first six weeks of the new administration, or about two per week. FAIR’s inhouse blog site, immigrationreform.com, has also experienced a huge upsurge in readership with some of the postings being shared tens of thousands of times. FAIR has also ramped up production of YouTube videos and podcasts, covering breaking events and providing vital information often overlooked by mainstream media.

With the Biden administration working overtime to decimate immigration laws and enforcement, FAIR is working non-stop to respond and provide vital information to the public. We urge members and others to stay informed by going to our website, fairus.org and looking under the “News” tab to get the latest informatio