In the day he was sworn in as the nation’s 46th president, Joe Biden inherited multiple crises. He took the helm of a deeply divided nation that was also grappling with a pandemic that has claimed the lives of some 500,000 Americans, historically high levels of unemployment, some 18 million children who had not seen the inside of a school building in almost a year, and unprecedented debt, to name just a few. And six weeks after taking office, all of those crises were being eclipsed by the leading edge of what is shaping up to be the biggest border crisis the nation has ever seen.

The Biden administration took immediate actions that sent an unmistakable signal that our borders were wide open and that enforcement would not occur except under extraordinary circumstances. FAIR predicted that the inevitable consequences of these actions would be a new crisis along our southern border. Those predictions have, unfortunately, proven to be true. 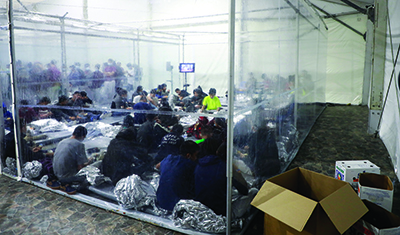 February, the first full month of the Biden presidency, saw border apprehensions soar to more than 100,000 – an alarming number of whom were unaccompanied children. As a result of the administration’s decision to scrap existing agreements with Mexico, virtually all of those apprehended will be released into the United States (if they haven’t already), pending hearings they are unlikely to appear for.

Dealing with the flood of unaccompanied children presents additional difficulties given that the Biden administration has ruled out returning them to their countries of origin or to their parents who are outside the United States. For their own safety, these minors must be detained until they can be placed with relatives or sponsors in this country. But rather than take commonsense steps to end the crisis, the Biden administration instead opted to call in the Federal Emergency Management Agency (FEMA) to manage this presidentially induced crisis.

FEMA, which is often tasked with setting up makeshift shelters for Americans displaced by natural disasters, was tapped to shelter an ever-growing number of unaccompanied minors who are winding up in government custody. These are the same detention facilities that candidate Biden decried as “cages,” and which were used under the Obama administration in which he served as vice president.

Homeland Security Secretary Alejandro Mayorkas, who as one of the chief architects of the disaster playing out at the border has tied the hands of our immigration enforcement agencies, applauded the role of the Border Patrol in caring for the children in their custody, rather than allowing them to do their primary job of securing the border. “I am incredibly proud of the agents of the Border Patrol, who have been working around the clock in difficult circumstances to take care of children temporarily in our care,” Mayorkas said.

All Americans should be proud of the job they are doing looking after kids who are being exploited by parents, smugglers, and political opportunists. In 2019, several senior FAIR staffers visited the largest such facility in McAllen, Texas, and reported on exceptional compassion and professionalism Border Patrol agents were exhibiting in their efforts to care for detainees (especially children) in their custody, despite obscene comparisons to Nazis leveled by media outlets and even members of Congress.

Though COVID-related circumstances make visits to crowded detention facilities more difficult, FAIR is again monitoring the situation at the border first hand. In March, FAIR Senior Fellow Mark Morgan, who served in both the Obama and Trump administrations as director of Customs and Border Protection (CBP), and as acting director of Immigration and Customs Enforcement (ICE) went to the border to assess the situation and speak to law enforcement agents on the front lines. Morgan will report his findings and his recommendations to the American public through talk radio and social media, and to members of Congress who are increasingly alarmed by the crisis the Biden administration has created.