Prohibitions against the admission of immigrants who are likely to wind up dependent on government benefits and services to meet their basic needs predates American independence, and has been codified in law since 1882. But none of that, nor the burdens placed on the American people by welfare-dependent immigrants, seem to matter much to the Biden administration. In March, the Biden administration canceled a much-needed federal rule promulgated under President Trump designed to prevent people who are likely to become public charges from settling in the United States.

The rule that would have shielded U.S. taxpayers from having to provide costly public benefits, such as cash benefits for income maintenance, SNAP (food stamps), most forms of Medicaid, Section 8 Housing Assistance, Section 8 Project-Based Rental Assistance, and certain other forms of subsidized housing, is now gone, and taxpayers will remain on the hook for these costs. The cancellation of the changes reinstates very unrealistic definitions established under the Clinton administration of what it means to be a public charge. 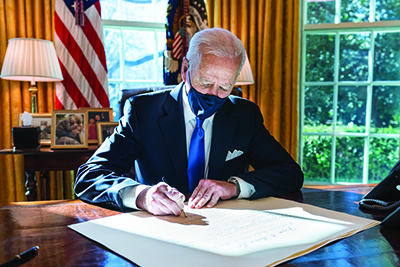 The Biden administration’s action allowing near unrestricted admission of government-dependent immigrants would be troubling even in better times. But with the lingering economic effects of COVID and increased demand on public resources, immigration policies that add to these burdens compound the strains on assistance programs.

The effects of the cancelation of the public charge rule could have even more damaging implications in light of the administration’s efforts to enact a sweeping amnesty (or even smaller ones) for illegal aliens. The Biden administration’s plan is to grant amnesty to upwards of 14.5 million illegal aliens, and subsequent family chain migration that could entitle as many as 52 million more people to qualify for green cards. If that plan were to succeed, the price tag for eliminating the revised public charge rule could run into the tens of trillions of dollars. But, when it comes to achieving this administration’s radical agenda of unrestricted immigration, no price appears to be too great.