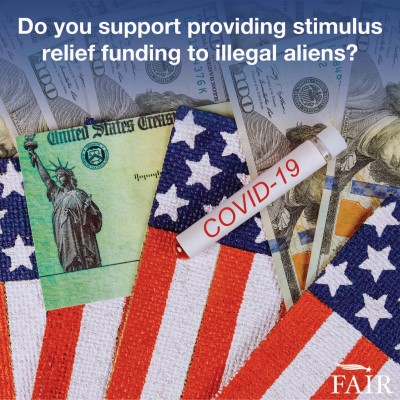 The next — and by far the most expensive – economic stimulus bill in Congress had less to do with stimulating the moribund economy and everything to do with stimulating the Democratic Party’s far left base in an election year. The Health and Economic Recovery Omnibus Emergency Solutions (HEROES Act), H.R. 6800, the $3 trillion government spending package also checked just about every box on the far left’s wish list, most of which had nothing to do with reviving the economy and getting laid-off Americans back to work. And since there is nothing higher on the far left wish list than mass immigration and an end to any meaningful immigration enforcement, the 1,800-page bill was laden with amnesty provisions for illegal aliens and taxpayer benefits to assist illegal aliens.

The HEROES Act was cooked up by House Speaker Nancy Pelosi and a small cadre of lieutenants while Congress was out of session due to the coronavirus pandemic and all but a handful of members were at home social distancing. As is often the case when congressional leadership doesn’t want the American people to know what’s in a bill, or even many of their own members, it was hastily brought to the floor of the House for a vote before anyone could possibly read through it thoroughly, or really figure out how $3 trillion of borrowed money would be spent.

It was approved by the full House by a vote of 208- 199 on May 15. Fourteen Democratic members voted against the bill — 13 representing “purple” swing districts and one far left member representing Seattle. Only one Republican, Peter King from Long Island, New York, supported the measure.

Fortunately, FAIR’s Government Relations team was able to get its hands on advanced drafts of the provisions of H.R. 6800 that pertained to immigration. What they found was an appalling effort on the part of Pelosi and her allies to use legislation meant to address a national health and economic crisis to make sweeping (and unpopular) changes to immigration law:

In response to this information, FAIR sprung into action to make sure that allies on the Hill, our members, and the general public were aware of these harmful and shameful provisions of H.R. 6800.

Thankfully, The HEROES Act was little more than a crass political stunt aimed at shoring up the Democratic Party’s far left flank. (Polls indicated that some 80 percent of Americans, including a majority of rank and file Democratic voters support a temporary cessation of immigration during the current crisis.) The bill stands almost no chance of being considered in the Senate, much less passed, and even less chance of being signed by President Trump if it were approved. What is significant is how far the Democratic leadership is prepared to go to advance the interests of illegal aliens (and their own perceived political interests) at the expense of Americans who have been devastated by the current health and economic crises.