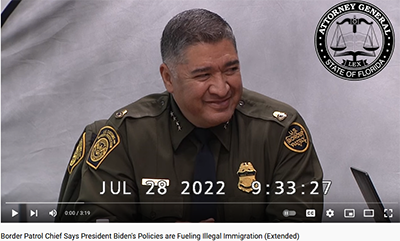 Raul Ortiz was appointed Chief of the U.S. Border Patrol in August 2021 by President Biden because of his willingness to go along with the administration’s lax border enforcement policies. In that role, Ortiz has towed the administration’s line that our borders are secure and our immigration laws are being enforced, even as it is plainly evident that they are not.

However, while Ortiz has been willing to lie for the administration in the media, he drew the line at perjuring himself. In July, Ortiz was deposed, under oath, by the office of the Florida Attorney General in a lawsuit brought by the state against the Biden administration’s handling of the border. A video of that deposition was publicly released in September. In it, Ortiz, under penalty of perjury, effectively calls Department of Homeland Security Secretary Alejandro Mayorkas and Vice President Kamala Harris liars for claiming that our borders are secure.

Florida Attorney General Ashley Moody claims (with a great deal of justification) that the Biden administration’s refusal to secure the border is imposing significant burdens on the state. An estimated 48,000 migrants traveling to Florida failed to check in with U.S. Immigration and Customs Enforcement. “The federal government now has no idea of their location or activity — even though most of them are legally inadmissible,” Moody charges.

Q: Would you agree, Chief Ortiz, that the southern border is currently in crisis:

Q: Would you agree, Chief Ortiz, that unprecedented numbers of aliens are illegally entering the United States?

Ortiz: I would imagine that they are turning themselves in because they think they are going to be paroled, yes.

Q: Would you agree, Chief Ortiz, that the aliens who cite favorable immigration policy as a reason to come to the United States are perceiving what actually is happening in the United States?

Q: When President Biden was elected, the number of aliens attempting to illegally enter the United States illegally increase, or decrease?

Q: From your 31 years of experience, has the Border Patrol ever had the number of encounters that it’s going to have in 2022?

Q: Is the crisis that is currently ongoing at the southern border making the border less safe for Americans and aliens alike?

Q: Why is it important to detain or remove demographics that are inadmissible?

Ortiz: One, you want to make sure you have consequences.

Q: And, if you don’t have consequences, what is likely going to happen?

Ortiz: In my experience we have seen increases when there are no consequences.

Q: So, if migrant populations believe there are not going to be consequences, then more of them will come to the border. Is that what you are saying?

Ortiz: There is an assumption that if migrant populations are told that there is a potential that they may be released, yes you can see increases.

Q: If you are not detaining and removing demographics that are inadmissible, the flow will compound, so it will increase at an exponential rate. Is that what is being suggested here?

Ortiz: Well, I do think it will increase, yeah.