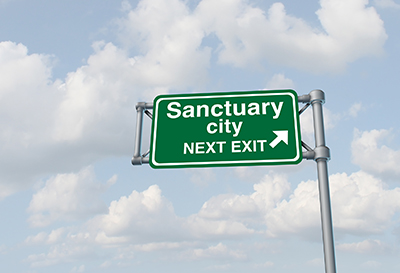 More than 600 jurisdictions – including entire states – have declared themselves to be sanctuaries for illegal aliens. It feels great to bask in the warm feeling of self-righteousness until you are called upon to put it into practice. Then…not so much.

Over the past several months, Governors Greg Abbott of Texas, Doug Ducey of Arizona and Ron DeSantis of Florida, whose states are being overwhelmed by the Biden administration’s self-induced border crisis have started busing and flying migrants to “welcoming” sanctuary cities, counties and states. Contrast the statements of local leaders in the sanctuary jurisdictions before the migrants started showing up and after:

“Under the new leadership of Mayor Eric Adams and with the coordination and support of New York City Council and our community partners, [the Office of Immigrant Affairs] will continue to affirm the City’s unwavering commitment to protecting, serving, and safeguarding the rights and well-being of all New Yorkers, regardless of immigration status.”

“In this new and unforeseen reality, where we expect thousands more to arrive every week going forward, the city’s system is nearing its breaking point. As a result, the city’s prior practices, which never contemplated the bussing of thousands of people into New York City, must be reassessed.”

“We celebrate our diversity and respect all DC residents no matter their immigration status. We are a sanctuary city because we know that our neighborhoods are safer and stronger when no one is afraid to call on our government for help, and when our police can focus on protecting and serving.”

After: Mayor Bowser request assistance from the Department of Defense (August 2022)

“The District of Columbia…request[s] to deploy the DC National Guard to help prevent a prolonged humanitarian crisis in our nation’s capital resulting in the daily arrival of migrants in need of assistance.”

“Chicago has been a welcoming city and a city of immigrants since its very founding, and proudly so.”

“Let me say loud and clear to Greg Abbott and his enablers in Texas, with these continued political stunts Gov. Abbott has confirmed what unfortunately many of us have already known. That he is a man without any morals, humanity or shame.

“Throughout my governorship I’ve directed my administration to adopt policies that make Illinois a welcoming state for immigrants, and I’m proud to sign these accountability measures into law to advance our cause. Every family, every child, every human being deserves to feel safe and secure in the place they call home. I am committed to making sure that value defines what it means to live in Illinois.”

“The governor of Texas is forcing on New York and D.C. and Chicago – and potentially other places – a needlessly last-minute and complex process that is a heartless display of politics over people. Why not give reasonable notice? Why send these folks only to blue cities or blue states? Why isn’t Abbott sending refugees to Mississippi, Oklahoma or Idaho? This is about politics for him.”

(*Gov. Pritzker’s family owns the Hyatt Hotel chain. So far their values do not include providing accommodations to the migrants.)

“I would love Martha’s Vineyard to become a haven for new immigrants to this country, but Senator Cruz has no idea what he’s talking about regarding a ‘border crisis,’”

“Again, Vineyarders support refugee resettlement—we just can’t adequately help them when given no advance notice. Using the ensuing disarray to prove a point is a blatant disregard for these Venezuelas’ human rights.”