On FAIR’s fact-finding mission to the southwest border in McAllen, Texas, the thing that was most jarring was the terrible toll President Biden’s self-described “compassionate” immigration policies are taking on the migrants themselves. What we witnessed were signs of exhaustion and stress: Coughing from dozens of the border crossers mixed in with the mewling of infants and toddlers who had all just journeyed across difficult terrain and likely put their lives in the hands of smugglers to arrive in the dead of night just to willingly give themselves up to border patrol agents.

Smugglers who clearly have no concern for any migrants safely reaching a better future, as evidenced by the news of that same week when footage showed them tossing 3- and 5-year-old sisters from Ecuador over a border wall in New Mexico. Clearly these child smugglers got all they wanted, the cash to “deliver” the children to the U.S. Perhaps they believed the girls would be rescued by Border Patrol agents who, in spite of being maligned by the media and members of Congress, truly care about the well-being of the migrants, or that they couldn’t care less if the girls didn’t make it through the night on their own, indicates how bad this situation really is. 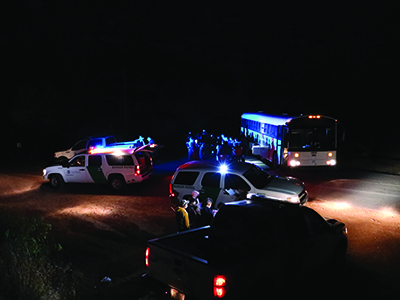 The inhumanity that is being enabled by the policies of the Biden administration was evident to us on the faces of the migrants we saw. The complicity of the president was forcefully noted by Rep. Brian Babin during the congressional press conference in which FAIR participated. “There’s nothing humane about what’s happening here and the cartels being empowered… and my heart goes out to these people,” he said, delivering the harsh truth about the border crisis that the Biden administration is denying. From our observations along the Rio Grande, it is clear that what is occurring is a humanitarian crisis, compounded by threats to the security and health of the American public while the White House does not just turn a blind eye to what is happening, but incentivizes and rewards it. Perhaps the only benefactors from the crisis created by the Biden administration are those who never cross the border at all – the human traffickers.

FAIR senior fellow Mark Morgan has stated over and over again about the cartels, “they started using families and unaccompanied minors (UACs) as a distraction,” in order to exhaust the resources of Customs and Border Protection (CBP) offering humanitarian assistance so that in other areas, “the border is wide open, it’s not monitored, and it’s not secure. Drugs are pouring in and criminal aliens are pouring in.” Agents on the front lines of this crisis are clear that the criminal cartels that reap enormous profits smuggling illegal aliens to the United States are also using them to tie up the resources of the Border Patrol so that they can facilitate the entry of hardened criminals and drugs in gaps in the border wall that President Biden has chosen to leave open. 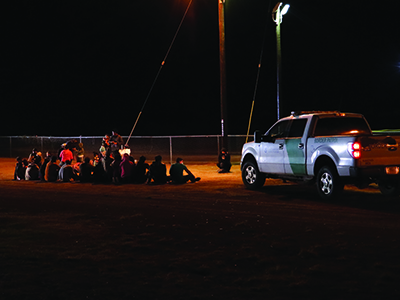 Right in McAllen, Texas, you can see where the border wall abruptly ends. The construction crew is still on-site but not to put up the wall that has already been funded because building was halted as soon as President Biden took office. When you look at the big picture it all becomes less surprising. In the very areas where border wall construction was stopped, hundreds of border crossers enter the country in the middle of the night, day, anytime, every single day. What should concern us all the most is not just the heavy flows of traffic that we can easily see at the border, but what’s happening as a result in other areas where patrolling resources have been pulled to deal with the surges.

As I go through footage of our trip, I keep hearing those heartbreaking sounds of the middle of the night. I keep thinking how, while all year long American citizens have been discouraged from traveling, children have been expected to stay in their homes and miss out on the much-needed experience of in-classroom learning, night after night, families and children with no accompanying guardians at all are being given a much different message from the executive branch. They are being told to leave their homes, to go out on a difficult journey, to be welcomed into overcrowded indoor facilities which were shut down to the American public during the pandemic, but now are reopened for illegal aliens to occupy while the Biden administration scrambles to find ways to disperse them into the interior of the country.