This is a special edition of the monthly FAIR newsletter, dedicated to firsthand reporting by senior members of FAIR’s staff from the Southern border.

As the nation’s leading immigration reform group we believe it was important to get a firsthand look at all aspects of the crisis along our southern border. Despite being perhaps the most important national news story of the first months of the Biden administration, the American public’s access to vital information has been limited. 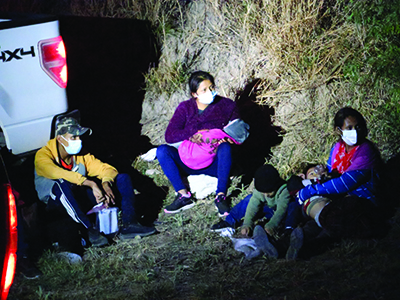 The Biden administration has severely limited the media’s access to the border and the teeming detention facilities that are filled with migrants – many of them children – who are entering the U.S. in unprecedented numbers because of the policies the president has put in place. Second, the increasingly ideologically driven media – which was harshly critical of former

President Trump’s border policies – has shown a reluctance to report the ugly consequences of Biden’s policies. Third, the administration has slapped real and de facto gag orders on the men and women on the front lines of the crisis because they do not want the American public to see the full scope of the damage their policies have caused.

In light of these circumstances, FAIR sent three senior staff members to the border area near the epicenter of the crisis, McAllen, Texas, in late March. These included FAIR senior fellow Mark Morgan, who has vast experience in immigration law enforcement having served as chief of the Border Patrol and acting director of Immigration and Customs Enforcement. Joining him were Matthew Tragesser, FAIR’s press secretary, and Luke Hanson, FAIR’s video content producer.

Over the course of several days, the FAIR delegation was able to gain access to key areas of the border to witness and document what is taking place. The group was also able to speak (off-the-record) with Border Patrol personnel, local government officials and residents of the border region. Like credentialed media, FAIR was denied access to detention facilities where untold numbers of migrants are being held.

In keeping with FAIR’s educational mission, the information and insights gathered during the three days spent at Ground Zero for the border crisis are being shared with the American public. Members of the FAIR delegation have reported on their findings on dozens of radio and television programs, and in widely circulated op-eds, as well as with members of FAIR in this special edition of the newsletter.

(FAIR’s video reports from the border can be viewed on our YouTube channel by going to youtube.com and entering Federation for American Immigration Reform in the search bar.)