The Biden border crisis is not staying at the border. As the administration continues to encourage mass illegal immigration and is releasing migrants into the United States (sometimes without even a court date to determine their eligibility to remain here or a COVID test), the migration crisis is affecting states and local communities all across the country.

In response to worsening conditions, a letter signed by 275 sheriffs from all across the United States was sent to President Joe Biden on April 7 imploring him to secure the nation’s borders and end the illegal migration crisis raging at our southern border. The sheriffs, representing 39 states, expressed their grave concerns about the national security and humanitarian crisis at the border and laid the blame squarely on the president’s policies. 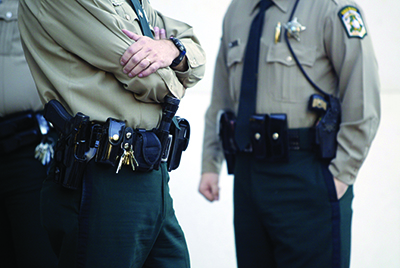 “America’s Sheriffs are deeply troubled about the dangerous impacts your administration’s border policies are having on our citizens, legal residents and communities,” they wrote. The elected law enforcement officials, from both political parties, demanded that

the Biden administration take immediate action to restore order at the border. “You must act now before our nation’s public safety resources are overwhelmed with the criminal side effects of unchecked illegal immigration, including transnational gangs, guns, dangerous drugs and human trafficking,” the sheriffs warned.

The sheriffs bluntly accused the president of endangering the lives of American citizens and ignoring the impact of his actions. “[M]ore families will be exposed to the violence associated with drug trafficking and transnational gangs. More parents will suffer the loss of their children, not because they were irresponsible, but because of exposure to criminal illegal alien violence caused by the reckless and irresponsible policies of your administration… What is most troubling to America’s Sheriffs is that you and your administration were well aware that this crisis would happen when you ceased construction of the border wall and changed border security policies,” states the letter.

FAIR has worked closely with sheriffs across the country for years, demanding better border and interior immigration enforcement. Over the years, FAIR has sponsored delegations of sheriffs to come to Washington to meet with DHS officials, members of Congress (and to provide testimony), and with the media. These elected law enforcement officials, directly answerable to the people they serve, are a vital part of the effort to oppose the Biden administration’s reckless policies.