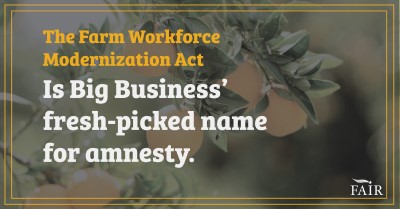 It is no secret that Big Agriculture wields a lot of power in Washington, DC, and just how much muscle it flexes is on full display at the moment. as its lobbyists push the ironically named Farm Workforce Modernization Act, H.R. 5038.

At a point in history when lawmakers from our two political parties can barely stomach being under the same rotunda with each other, the powerful agriculture lobby has managed to push a massive amnesty bill to the top of the congressional agenda. H.R. 5038 would grant amnesty to an estimate 1.5 million illegal aliens and essentially indenture them to their employers for a decade or more. Amidst full-scale impeachment proceedings, the House approved H.R. 5038 by a 265-160 vote in mid-December. It now awaits action in the Senate.

At a time when efficient and productive agriculture (like just about everything else in the mod- ern world) hinges on employing cutting edge technology, the Farm Workforce “Modernization” Act aims at enshrining cheap low-efficiency, manual labor as the future of this essential industry. The bill is not only regressive in an economic sense, but in a social one as well. As a condition of receiving amnesty as a Certified Agricultural Worker (CAW), illegal aliens would be required to labor in the agricultural industry, (almost certainly for poor wages and under poor working conditions) for between nine and 15 years.

The bill ignores the fact that agriculture already enjoys the most privileged status of any industry when it comes to access to foreign labor. Under the existing H-2A program, agricultural businesses can bring in unlimited numbers of foreign guest workers. But, because the H-2A program requires employers to meet certain minimal wage and work standards, as well as requirements to provide housing and transportation for guest workers, many in the industry opt for even lower wage and lower cost illegal aliens.

Aside from being morally objectionable on two counts – providing amnesty to illegal aliens and codifying a regressive form of indentured servitude – the Farm Workforce Modernization Act is also doomed to failure. While it might buy the industry a decade or so of low-wage toil from their existing labor force, history demonstrates that they will abandon these jobs at the first opportunity they get.

Proving Mark Twain’s quip that “History doesn’t repeat itself, but it often rhymes” to be literally correct, the CAW amnesty is almost an exact replicate of the failed 1986 SAW (Special Agricultural Worker) amnesty program. Under that fraud-ridden program, appended to the larger 1986 illegal alien amnesty, beneficiaries fled the poor wages and working conditions offered by their agricultural employers in search of more attractive jobs in other sectors of the economy. Because of a lack of effective enforcement mechanisms, these same employers simply reverted to their old practice of hiring the next wave of illegal aliens. 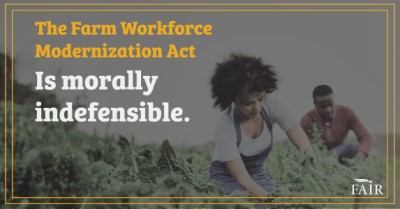 It is perhaps a sad commentary on the state of American politics that in a rare display of bi- partisanship, lawmakers from the two parties have come together to promote an economically and socially regressive bill that smacks of the 19th Century, and label it as “modernization.”

FAIR is actively opposing H.R. 5038 and remains committed to promoting immigration reform legislation that benefits the public interest, not special interests – no matter how powerful.