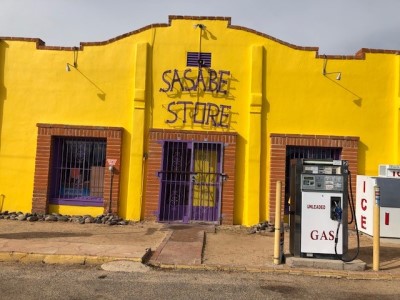 As many media outlets have assumed overt advocacy positions on immigration and the border crisis – reporting some facts, while consciously omitting other facts that conflict with their advocacy positions – FAIR has been gathering firsthand information that provides a fuller picture of what is actually going on.

As the crisis along our southern border has intensified, FAIR has dispatched senior staff four times in the last 12 months to assess the situation in key areas. Our latest effort to fill in the (very large) gaps left by mainstream media outlets took place in early December along the Arizona border with Mexico. FAIR met with Customs and Border Patrol agents (both those who patrol the border, and those who oversee the legal ports of entry), and local Arizona law enforcement officials.

Among the key findings of FAIR’s fact-finding effort that have not been widely reported in the media:

The Border Security Fence is Extremely Effective. And Then It Stops.

Sections of the Arizona border, primarily near legal ports of entry, are protected by secure border fencing and border walls. In these areas, according to Border Patrol officials and local law enforcement, few if any illegal aliens and contraband enter the country. These stretches of secure border fencing are constructed of vertical steel slats that allow border agents to see what is happening on the other side of the border. In rural sections of the border, the security fence is enhanced by concertina wire that prevents people from scaling it. In more urban sections, it includes wire mesh be- tween the slats to prevent criminal cartels from handing contra- band to associates on the U.S. side who can quickly disappear into the community. 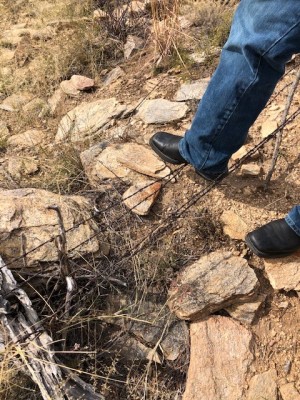 And then the fence just stops. In the remote border hamlet of Sasabe (population 54), there is an imposing section of virtually impregnable border fence. However, drive a mere 2.3 miles west of the Sasabe port of entry and the security fence comes to an abrupt end. In its place are two strands of waist-high barbed wire connected to the security fence by a piece of rope. While we were there, that stretch of border was patrolled by one agent in a jeep. Likewise, in other areas along the border, se- cure and effective fencing comes to an abrupt end and is replaced by a few flimsy strands of barbed wire or nothing at all.

The Sinaloa Cartel, one of Mexico’s most dangerous criminal gangs, uses lookouts on both sides of the border and radio communications to signal when the Border Patrol is present and when they are not. Cartel lookouts operate brazenly in the open. As we drove down Sasabe’s main road, the off- duty Border Patrol agent escorting us pointed out the cartel lookout (who likely had some form of legal status in the U.S. and thus had no fear of the Border Patrol) and pulled up to talk with him. The cartel operative, who was clearly there to report on the Border Patrol’s whereabouts, calmly explained that he was “just out for a walk” before we drove off (and our departure was likely relayed to compatriots somewhere in the brush on the other side of the border). Clearly, the Border Patrol needs more boots on the ground.

Sasabe’s one commercial enterprise, cash-only, exists for the sole purpose of supplying the cartel with the provisions they require. The store (which was closed on the Tuesday we were there) stocks a variety of camping equipment (in an area where no sane person would camp), ammunition, and other things that smugglers might need to get their human and non-human cargo to their destinations.

As the border crisis has raged over the past several years, the burdens associated with our unsecured borders are being borne by local communities. Admirably, Arizona and border counties have stepped up to the plate to fill the void left by Washington, and protect the citizens of that state. These efforts stand in sharp contrast to the growing number of sanctuary jurisdictions around the country. 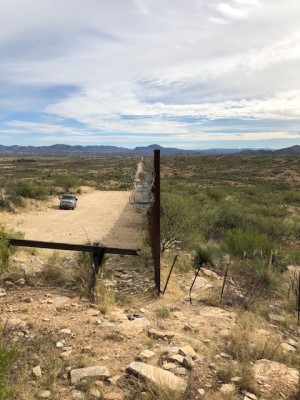 These state efforts are augmented by county governments that have established their own task forces aimed at protecting local residents from the criminal cartels that endanger their com- munities. Cochise County, which sits along a large stretch of border in southeastern Arizona, has set up its own task force, known as the Southeastern Arizona Border Region Enforcement (SABRE) group, within the sheriff’s department. At the county’s own expense, they have set up hundreds of cameras along the border to monitor illegal cross-border activity.

The network of cameras allows the SABRE team to gather photographic evidence of every illegal border incursion. While the county cannot enforce immigration law violations, the SABRE team can go after the drug smugglers, and they do so with enormous effectiveness. They have an unblemished 100 percent conviction rate of the smugglers they arrest. Moreover, to deter the unscrupulous use of juveniles as cross-border “drug mules,” the county has begun prosecuting minors and providing rehabilitation programs for them while incarcerated.

In a positive example of local-federal cooperation, Cochise County shares the photographic evidence of illegal immigration with the Border Patrol. But, because of limited manpower, only about 48 percent of those photographed entering the country illegally are apprehended. The rest disappear into the interior of the country, bound, in most cases, for sanctuary jurisdictions that local officials cite as magnets for illegal immigration.

Because many media outlets refuse to cover the dangers posed to Americans and nation- al security because doing so does not promote their ideological objectives, these FAIR border missions provide vital information to the public. In the days following FAIR’s fact-finding efforts in Arizona, our spokespeople appeared on more than 40 live radio programs across the nation to report our findings directly to the American people. These and other findings are also disseminated through op-eds on prominent news and opinion sites.

In the absence of objective coverage of the numerous crises raging along our borders, FAIR will continue these fact-finding missions to deliver much-needed information to the American public.