When Joe Biden is sworn in on January 20, construction of the border wall is all but certain to come to a screeching halt. During his last year in office, President Trump added some 450 miles of new barriers along the southern border, a policy President-elect Biden has repeatedly vowed to end immediately upon taking office.

While this is a campaign promise that Biden will almost certainly make good on, it would also be a monumental mistake – especially under the circumstances he will inherit. Even in ordinary times, an effective border barrier is essential to protecting the security and interests of the nation. Current circumstances make it all the more necessary. 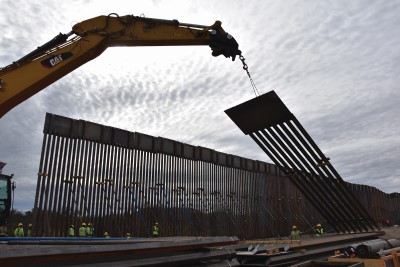 Illegal immigration is surging. Apprehensions along the southern border reached 69,000 in October – levels not seen since July 2019. October marked the sixth straight month that border apprehension increased. Moreover, according to Customs and Border Protection Acting Commissioner Mark Morgan, the increasing flow of migrants is reverting to more traditional patterns of single men in search of employment and a resurgence of illegal immigration from Mexico.

The COVID crisis shows no signs of abating. In addition to all the other dangers posed by unchecked illegal border crossings, the most recent surge is occurring amid a global pandemic. The 69,000 figure represents only those who were caught entering the country illegally. We have to assume that many more illegal aliens took advantage of still-unsecured sections of the border to gain entry. Unknown numbers of these people may be carrying the coronavirus and have no successfully made their way to countless communities across the United States.

Many U.S. health care facilities are at the breaking point. At the start of December, more than 96,000 COVID patients around the country required hospitalization, pushing many health care facilities to the brink. California Gov. Gavin Newsom warned that intensive care units in his state could be at 112 percent of capacity by Christmas. Other states and localities are experiencing similar crises. An influx of illegal aliens from countries where the COVID crisis is even worse could push many sectors of our health care system over the edge.

Unemployment remains at crisis levels. The health crisis has led to an economic and unemployment crisis as well. As CBP’s Morgan noted, the majority of migrants crossing our unsecured borders illegally are coming in search of jobs, as COVID ravages the already weak economies in their homelands. The last thing millions of unemployed American workers need is a new surge of job-seeking migrants.

State and local budgets and social services are straining to the breaking point. With unemployment at sustained high levels, tax revenues to state and local governments have plummeted while reliance on government services has spiked. A new (and likely bigger surge under a Biden administration) would bring large numbers of people who would depend on public services and emergency benefit programs that are barely keeping their heads above water.

FAIR will work with allies in Congress and through outreach to the American public to oppose the new administration’s efforts to halt construction of the border wall. While the new president will certainly be under enormous pressure from the far left to end construction – possibly even to remove sections of the wall that is already built – FAIR will continue to use its access to members of Congress and the media to highlight the urgent need for maintaining construction amid the multiple crises the Biden administration will inherit when it takes office.