An Immigration Reform Agenda for the 113th Congress 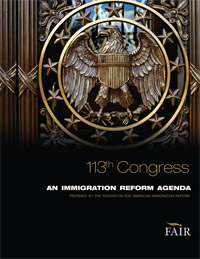 Illegal immigration and mass immigration are detrimental to the quality of life in the United States. The American family is increasingly bearing the costs of traffic congestion, urban sprawl, environmental degradation, increased crime, overburdened health care, overwhelmed public schools, and debt-ridden state and municipal government—all results of uncontrolled immigration. The fiscal costs of immigration, legal and illegal, have always been substantial, but with the recent economic downturn, these costs have become even more burdensome. FAIR estimates that the annual cost of illegal immigration alone to the American taxpayer—after accounting for tax revenue received from illegal aliens—is roughly $113 billion.  Congress and the federal government must restore legitimacy to the U.S. immigration system by ensuring that existing immigration laws are enforced and passing new legislation that will curtail legal immigration and improve the quality of life for all Americans.

As the 112th Congress was sworn in, the U.S. was slowly digging itself out of the worst recession to hit our nation since the Great Depression. Unemployment had dropped to roughly nine percent, but official data showed that immigrants benefited disproportionately from the creation of new jobs. However, instead of adopting immigration policies that prioritized American workers, Congress accomplished little in that arena.  Lawmakers instead generally limited their work to narrow immigration bills, and even then, had little success in enacting anything.

We look forward to working with you through the 113th Congress.

DACA: What You Need to Know

Guatemala is asking the U.S. to stop deporting Guatemalans to prevent the spread of the novel coronavirus in the co… https://t.co/wDap8XuaT1

DHS Chief: US To Build ‘400-450 Miles’ Of Southern Border Protections By End Of Year https://t.co/bqO4QRB6qk via @realDailyWire