The backlog of pending immigration court cases now exceeds one million, according to TRAC at Syracuse University. The backlog grew 31 percent from fiscal years 2018 to 2019 and it grew an astounding 181 percent between FY 2009 to FY 2019. 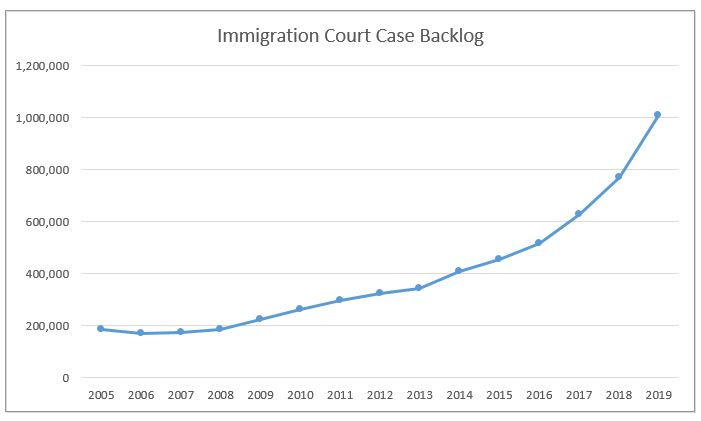 The graph shows the steady growth of the backlog in our immigration court system, which is known as the Executive Office for Immigration Review (EOIR). The backlog began growing rapidly in FY2007, which marked a reversal of what had been a steady trend of the years in which the number of active cases were under or about 200,000 a year.

The backlog, particularly between 2017 and 2019, reflects the growing humanitarian and security crisis occurring at the border. In FY 2019, Customs and Border Protection (CBP) has already apprehended over 811,000 individuals and more than half of those are unaccompanied alien children and family units seeking asylum. Our asylum loopholes, particularly the Flores settlement, combined with the low bar of the credible fear threshold, has encouraged abuse of the system in the pursuit of a chance to live illegally in the United States. Only 13 percent of aliens who pursue asylum eventually earn it. Those denial rates show that most cases are frivolous, lack evidence, or are eventually withdrawn. The majority of those claiming asylum in recent years are economic migrants, drawn to our borders by our weak laws and asylum loopholes.

Unless laws change, the backlog will only increase. The administration has taken steps towards reducing the number of asylum-seeking aliens, but only Congress has the ability to stop the crisis. Congress could begin to reduce the backlog of immigration cases by passing into law a higher credible-fear standard, ending or amending the Flores settlement, expanding expedited removal, and by hiring more immigration judges.

There is little that the administration can do to remedy this problem. Only Congress, by passing legislation addressing these issues, can hope to reverse the growth of the immigration court case backlog.

As they seem to do on an annual basis, lobbyists are demanding Congress bring in more cheap farm laborers. https://t.co/m98EqfQm6s #FAIRblog