The United States is the global leader in science and technology.[i] American producers dominate worldwide markets for technological products ranging from personal computers to oil and gas extraction technologies. And the U.S. stimulates technological innovation throughout the world by furnishing investment dollars, providing expertise and creating a market for accessory products.

As cellphones, GPS navigation systems, LED lights and hybrid cars have begun to change the way we live, they have also changed labor markets throughout the world, creating what former Secretary of Labor Robert Reich called “creative and knowledge economies.”[ii]

Rather than relying upon unskilled labor, of the type needed for agriculture and old-fashioned factory assembly lines, creative and knowledge economies are dominated by individuals with scientific, technology, engineering and mathematical (STEM) skills. That should be good news for Americans who are seeking entry-level jobs, or who are looking to transition to a more profitable career field. As U.S. News & World Report has noted, “STEM-related skills are not just a source of jobs — they are a source of jobs that pay very well.”[iii]

As a result, all across the U.S., there is a growing demand for employees who possess STEM skills. In response, many states are investing heavily in the education and training necessary to prepare residents for profitable employment in STEM-related industries. From kindergarten to college and beyond, city, county and state governments are implementing STEM career transition programs.[iv]

And the same state and local governments are also spending millions of dollars to encourage STEM employers to do business in their jurisdictions. For example, North Carolina has, for years, heavily promoted its bio-tech-centered “Research Triangle,” located in the Raleigh-Durham-Chapel Hill area. According to Forbes, that effort attracted at least 170 companies, approximately 40,000 high-skilled workers and millions of dollars to the area.[v]

However, these efforts to build a STEM infrastructure for the United States have failed to translate into an expansion of opportunities for American citizens. And that is because massive numbers of STEM positions are being given to foreign-born workers who are brought into the United States for the express purpose of filling them.

Why? Because they are cheaper. For most foreign workers from places like India, China and the Philippines, the end-goal is to remain in the United States permanently. They want to access the U.S. job market on a temporary H-1B visa and convince an American company to sponsor them for an employment-based green card. Working more cheaply than similarly experienced U.S. workers is just the cost of doing business. 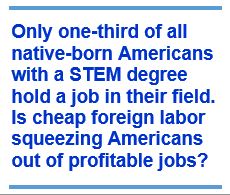 Plus, even if they are not making what would be considered fair market wages in the United States, these foreign employees are still making far more than what they could earn back home. For example, a mechanical engineer in India makes approximately 200 rupees per hour – a little bit less than $3 U.S – for a total of around $22.00 — $23.00 per day.[vi] The same work in the United States yields an average of $27 hourly,[vii] meaning Indian STEM workers can make more for one hour’s labor in the United States than they do for an entire day in India.

Many foreigners are willing to labor for less in order to enter the United States lawfully. Couple that with corporations’ relentless need to reduce operating costs and the result is the perfect storm. An alarming number of corporations are willing to do whatever it takes to find a renewable source of cheap labor.

So, American companies have begun hiring foreign workers to fill STEM positions in the United States. And, with the complicity of the open-borders lobby, they are having no problem doing just that. There are millions of foreigners who are willing to accept lower wages to live freer, safer and easier lives in the United States.

But American workers are paying the price.

Squeezing Americans Out of the STEM Economy 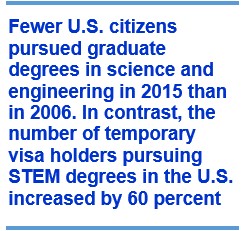 Nationwide, roughly 25-30 percent of the STEM workforce consists of foreign-born workers.[viii] This is disproportionately higher than the 15-17 percent of the total workforce made up by migrants.[ix]

What is even worse is that the current influx of foreign STEM workers is preventing America’s recent college graduates from getting jobs in STEM fields. According to the Center for Immigration Studies, only one-third of all native-born Americans with a STEM degree actually hold a job in their field. And roughly half of those who do will move on to a different career before they turn 50.[x]

That means most native-born Americans with STEM degrees end up looking for work in other fields because the growing influx of cheap foreign labor is driving down wages in the STEM sector, making it impossible for U.S. workers to compete.

According to data from the Bureau of Labor Statistics (BLS), career wages for STEM-degree holders are now increasing at a considerably slower rate than for individuals with comparable degrees in non-STEM fields. For example, students who obtain a degree in finance can expect a better starting wage and about 11 percent higher salary growth over a 10-year period than students who earn a degree in computer programming.[xi] 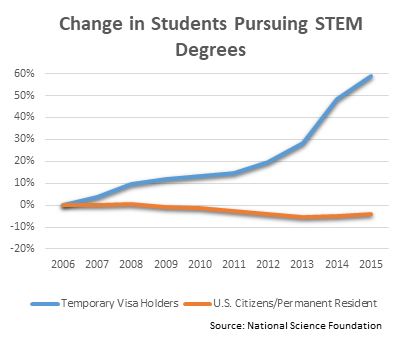 This trend is discouraging young Americans from even attempting to pursue science and technology careers. Overall, enrollment in STEM undergraduate degree programs is growing at a much slower rate for native-born Americans than it is for foreign-born students.[xii]

Furthermore, according to the National Science Foundation, foreign-born students “have kept U.S. graduate enrollment in [science and engineering] fields from shrinking.”[xiii] Due to rapidly growing competition from foreign students, fewer U.S. citizens pursued graduate degrees in science and engineering in 2015 than in 2006. In contrast, the number of temporary visa holders pursuing STEM degrees in the U.S. increased by 60 percent during the same time period.[xiv]

The fact is, if the vast majority of job opportunities in STEM fields go to foreign workers, Americans will inevitably stop seeking degrees in these areas. Because American students incur significant costs in order to obtain university credentials, they will inevitably seek degrees that produce a return on their investment. 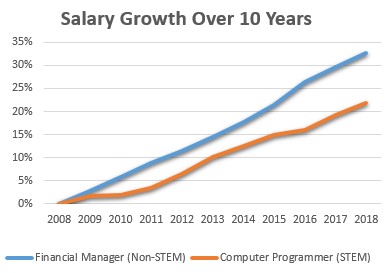 As new, high-tech companies become successful, they start purchasing property and building new facilities. Workers of all types then flood into the affected neighborhoods looking for construction gigs, entry-level and security guards, and employment in the various businesses that spring up to support the high-tech companies – everything from cafés to auto-repair shops.

Cary, once a sleepy hamlet outside of Raleigh, has become the seventh largest municipality in North Carolina.[xv] It was also the fifth fastest growing municipality in the United States between September 2006 and September 2007.[xvi] The town’s massive expansion is directly attributable to the development of aforementioned Research Triangle area. And its median income, as of 2011, has risen to $110,609 per year.

And the effects of technology are not confined to the software development and bio-tech industries. In fact, according to a study published by the Metropolitan Policy Program of the Brookings Institution, the proliferation of technology throughout American industry has created positions for lower-skilled workers who possess basic STEM-related knowledge, but not necessarily a STEM degree.[xvii]

Rural states such as North Dakota and Wyoming experienced exactly this phenomenon with the emergence of their mining, oil and gas industries.[xviii] In fact, North Dakota has overtaken California as the third largest oil-producing state, causing it to have the lowest unemployment rate in the country.[xix]

But will these economic booms prove a long-term benefit for Americans who want a career in a STEM industry? That remains to be seen. The Raleigh-Durham-Chapel Hill Research Triangle is already home to a large number of Indian and Chinese H-1B tech workers.[xx] And, according to NewAmericanEconomy.org, North Dakota is being flooded with migrant workers looking for jobs across the economic spectrum.[xxi]

It seems that whenever salaries stabilize in a particular field, employers are all too ready to undercut the wage market by asking for cheap foreign labor. And that demand inevitably leads to claims that more foreign workers are the “only” solution – a claim that is typically supported with the bogus assertion that immigrants are more entrepreneurial than Americans.[xxii]

That is not true, however. American workers, including STEM workers, are the best and most productive in the entire world. What they need is the opportunity to compete for jobs at fair wages, not unfair competition brought about by the mass importation of foreign tech workers.

On the surface, importing “skilled workers” might seem like a good idea. After all, the common narrative pushed by the open-borders cohort is that there are too few native-born Americans to fill the growing number of high-tech jobs in the country and that tech-savvy foreign workers actually create jobs for the Americans who work in companies supporting STEM enterprises.

However, real-life evidence suggests this is not the case. Despite a booming STEM sector in the United States, American tech workers are not reaping the expected rewards – larger salaries and increased opportunity for advancement.

That is because businesses are deliberately driving down wages in the tech sector. They do this by abandoning U.S. STEM workers in favor of foreigners whose primary interest is a visa that allows them access to the American job market, rather than high wages.

This creates a vicious cycle where employers falsely claim that they are facing a shortage of workers that can only be filled by importing more cheap, foreign labor. But no “shortage” really exists. Employers, who are addicted to inexpensive, easily replaceable foreign workers, simply do not want to pay the wages that an un-manipulated labor market would demand. So American workers lose out.

Take a look at some all-too-real examples: In 2015, American IT workers at Disney were fired in favor of cheaper foreign labor. As part of their severance agreement, these U.S. citizens were required to train their replacements.[xxiii] In 2016, Intel fired thousands of American STEM workers despite hiring more than 3,000 foreign temporary workers the same year.[xxiv] Stories like this are happening all over the country.

U.S. citizens should be first to benefit from a booming American economy. Therefore, it is time for the United States to put its own workers first. Our focus must be on training our own labor force to face competition from abroad, not on importing new workers to compete for jobs at home.

[viii] Based on calculations derived from occupational data from the BLS.

[ix] Based on calculations derived from the Census Bureau.

[x] Steven Camarota and Karen Zeigler, “Is There a STEM Worker Shortage?” Center for Immigration Studies, May 19, 2014, https://cis.org/There-STEM-Worker-Shortage.

[xi] Based on calculations derived from occupational data from the BLS.

[xx] Andrew Ashley, “Should We Stay or Should We Go?: A Study of Indian IT Migrants in Raleigh-Durham, North Carolina: Deciding to Stay in the United States or Return to India,” University of Kentucky, 2015, https://uknowledge.uky.edu/cgi/viewcontent.cgi?article=1048&context=geography_etds.

“FACTS YOU CAN USE To Prove That High-Skilled Immigration is Good for America’s Workforce and Economy,” Information Technology Industry Council, Accessed December 2019, https://www.itic.org/dotAsset/66be841e-598d-46d2-9a6b-a7800f8b10fc.pdf.