Special interest groups backing amnesty for illegal aliens under the guise of 'earned legalization,' or 'a pathway to citizenship' have been frustrated in achieving their legislative goals in Congress. In response, they have increased their attempts to discredit their opponents. Amnesty proponents have long tried to brand their opponents as being 'anti-immigrant.' These politically motivated attacks ignore the fact that illegal immigration is an entirely separate issue from legal immigration. The Washington Post, which ordinarily sides editorially with defenders of illegal immigrants, has recognized that persons opposed to that position are not against immigration. The newspaper's Ombudsman in a commentary in the March 2, 2008 issue chided the editors for failure to uphold their own policy against such references, stating, "A few 'anti-immigrant' references have popped up in recent stories and shouldn't have." 1

The Southern Poverty Law Center has asserted that organizations that call attention to negative aspects of illegal immigration are guilty of 'hate speech.' 2 That claim has been echoed by advocates for illegal immigrants such as the National Council of La Raza. This is in effect a scolding that if you can't say something nice about illegal aliens you shouldn't say anything at all. This campaign, which has recently targeted major broadcast news media, is a veiled attempt to censor opposition to their policy objectives. It also is an attack on the role of an informed citizenry in the operation of a democratic society. Another assertion these organizations throw at their opponents is that drawing attention to the problem of illegal immigration has led to a surge in 'hate crimes.' 3 That is a serious allegation and merits a serious look at the facts.

Data on hate crimes are collected by the FBI. Two of the FBI's data categories are Hispanic victims and incidents against Hispanics. A hate crime is considered to be, "…a criminal offense committed against a person, property, or society that is motivated, in whole or in part, by the offender's bias against a race, religion, disability, sexual orientation, or ethnicity/national origin." 4

To facilitate a meaningful analysis of violent crime in the U.S. over time, the FBI data reports the number of crimes as a factor of the size of the U.S. population at that time, i.e., the number of crimes per 100,000 residents. The reason for this is that this allows a focus on whether violent crime is growing faster or slower than the overall population. Even though the incidence of violent crime might be higher over the period of a decade, if the number of recorded instances per 100,000 residents is fewer, this means that the likelihood of a person being the victim of a hate crime had lessened. 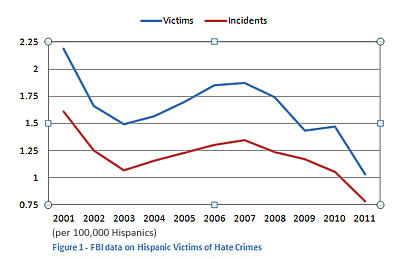 As may clearly be seen in the data display, the likelihood that a Latino living in the U.S. was the victim of a hate crime has significantly declined over this period — by more than one-third (34.2%) for victims and by nearly as much (32.2%) for incidents. This is directly contradicts the assertion of the Southern Poverty Law Center (SPLC) that hate crime statistics, "...strongly suggest a marked upswing in racially motivated violence against all Latinos, regardless of immigration status." 6 The SPLC statement is intentionally misleading because it fails to adjust the hate crime data for the size of the Latino population, because it ignores the increase in jurisdictions submitting hate crime reports, and because it hides the longer-range downward trend in reported hate crimes against Latinos.

The SPLC's misleading information is couched in a discussion of increased public expression of opposition to the growing illegal alien population. The debate over illegal immigration and legislative measures to deal with it has steadily increased in recent years at the national, state, and local level. If the SPLC's assertion were valid, the recent data for hate crimes would have shown a major increase. As the data shown above indicates, however, the number of hate crimes against Latinos per 100,000 actually dropped from 1.6 in 2001 to 0.78 in 2011. The comparable hate crime victim incidence over the same period fell even more sharply from 2.19 to 1.28.

However, an objective examination of the statistical data exposes as misleading the claims that the debate over illegal immigration has led to an increase in the number of hate crimes against Hispanics. The trend in FBI-recorded hate crimes data is downward, not upward as a share of that growing population. It is important that the American people have accurate information on issues as pressing as immigration reform and hate crimes. Mischaracterization of trends in a manner that attempts to muzzle debate and informed judgment is a disservice to the public.

On December 30, the GEO Group (GEO) filed suit against the State of California, claiming that the Golden State’s ba… https://t.co/gH0Z3PIVKM