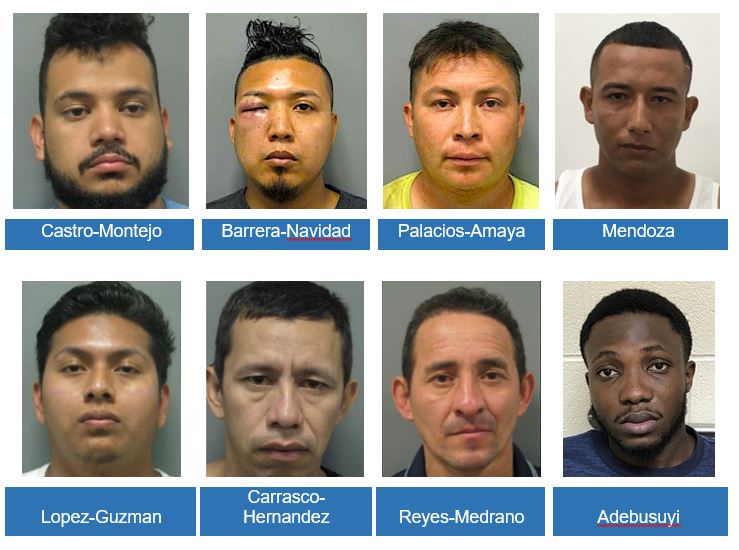 All eight of the men were unlawfully present in the United States. Several of them had already been ordered removed by the U.S. Immigration Court or deported by U.S. Immigration and Customs Enforcement: Barrera-Navidad was ordered removed by an immigration judge in 2016 but was, apparently, never deported. Palacios-Amaya was deported and returned to the United States illegally. Carrasco-Hernandez was deported in 2017 and unlawfully re-entered the country sometime thereafter.

And these examples are drawn from just one category of crimes. What about illegal aliens committing burglaries, assaults, murder and other serious crimes?

Between June of 2017 and June of 2018, Montgomery County experienced a 67 percent increase in gang-related crime.[viii]Most of that increase appears to have been tied to illegal alien members of the MS-13 street gang. Examples of gang-related crimes include the brutal 2018 beating of a 15-year-old sex trafficking victim by three MS-13 illegal aliens: Ivan Alexis Pena-Rodriguez, Yervin Josue Romero-Rivera and Miguel Angel Ayala-Rivera.[ix]

But a fair share of the crime has also been perpetrated by illegal aliens who just seem to prefer crime to a quiet life in suburban America. Instances of crime that was not obviously gang-related include the gruesome 2008 murder of 86-year-old Lila Meizel who was burned alive by Salvadoran illegal alien Ramon Alvarado in order to cover up a check-fraud scheme.[x]And in 2017, Mario Granados-Alvarado, an illegal alien from El Salvador, broke into a Rockville, Maryland, police car and stole a shotgun and an AR-15 rifle, which he then brought to high school.[xi]The teenager had multiple prior criminal arrests.[xii]

Montgomery County Blames it All on “Xenophobic” Conservatives, Not Ridiculous Policies that Encourage Lawless Behavior

County officials then affirmed that, “Social justice for all is what we strive to achieve in our County.” Of course, one wonders who is seeking actual justice for the victims of these criminal illegal aliens?[xiv]

Councilman Hucker is grossly mistaken. Research conducted by FAIR suggests that Montgomery County’s skyrocketing crime rate is directly tied to the presence of massive numbers of illegal aliens and its status as a sanctuary jurisdiction.[xvi]We analyzed data from the federal government’s State Criminal Alien Assistance Program (SCAAP) initiative, which reimburses state and local jurisdictions for incarcerating criminal aliens. The statistics we derived suggest that illegal aliens are at least three times as likely to be incarcerated, compared to citizens and lawfully-present aliens.[xvii]

And, according to SCAAP data, there were at least 563 illegal aliens locked up in Montgomery County jails in 2016. That is roughly one quarter of all the illegal aliens incarcerated in the State of Maryland. So, Montgomery County has more than 25 percent of Maryland’s illegal alien inmate population, despite being home to only 15 percent of the state’s total population. That is because Maryland’s most populous county has been working overtime to turn itself into a magnet for illegal aliens, many with ties to criminal gangs and drug trafficking organizations.

So what, exactly, is going on in Montgomery County? It has simply made itself far too attractive to illegal aliens by declaring itself to be a sanctuary jurisdiction.

Montgomery County has loudly and proudly announced that it is a sanctuary jurisdiction that does not cooperate with U.S. Immigration and Customs Enforcement (ICE).[xviii]And, as one would expect, that status seems to be attracting an unsavory cast of illegal aliens who are engaging in a higher than average number of crimes.

Sanctuary proponents claim that if state and local police officers are seen as “immigration agents,” then illegal aliens who are the victims of crime, or witnesses to crime, will not come forward to aid police. In effect, they are claiming that good immigration enforcement interferes with the ability of state and local law enforcement agencies to stop child predators, drug dealers, rapists or robbers.

But that approach does not seem to be working in Montgomery County. In reality, it does not work anywhere, and here is why: The vast majority of illegal aliens come from countries where law enforcement authorities are either corrupt or serve as a tool of state oppression.[xix]They do not suddenly begin trusting American police officers because of sanctuary policies.

In addition, gangs are inextricably tied-up with criminal activities in illegal alien neighborhoods. And vicious gangs like MS-13, which is running rampant in Montgomery County, often exact retribution from anyone who is viewed as collaborating with law enforcement. As a result, most illegal aliens have no interest in cooperating with policing authorities at all.

In fact, once a city or town becomes a sanctuary jurisdiction, illegal aliens are less likelyto cooperate with local police. Jurisdictions that ignore and promote illegal immigration erode civic trust in law enforcement. They send a clear message that law enforcement agencies in sanctuary jurisdictions are willing to tolerate a certain level of lawlessness.[xx]  The result is a chilling effect; fewer residents may be willing to approach police if they believe that officers are only willing to enforce certain laws against certain law-breakers under certain conditions. Uniformly enforcing all laws for all residents of a particular jurisdiction demonstrates integrity and fairness and fosters open dialogue.

What About Montgomery County’s Claim That it Is Not Reallya Sanctuary Jurisdiction?

According to the county’s website, “Montgomery County is not a ‘sanctuary’ jurisdiction.”[xxi]Why? Because, allegedly, “Local police and the Department of Correction and Rehabilitation work cooperatively with ICE in their work on immigration and customs violations and drug and human trafficking.” However, the very same web-page goes on to state that, “Montgomery County’s policy is not to inquire about anyone’s immigration status, nor does the County conduct any immigration enforcement or investigations. We believe that this is the right balance for this County.”

That is a nice attempt by the county to talk out of both sides of its mouth for political gain, but it does not stack up against reality. On July 22, 2019, County Executive Mark Elrich issued an Executive Order titled “Promoting Community Trust.”[xxii]That document states, “Enforcing federal immigration law is the sole responsibility of the federal government of the United States and it is not in the interests of Montgomery County to utilize its limited resources to facilitate the enforcement of federal civil immigration law.”

However, that is an utterly absurd contention, for a number of reasons. First off, Montgomery County does not have limited resources, especially when it comes to law enforcement. The county’s police department has an annual operating budget of $295 million.[xxiii]And its sheriff’s office has a $25 million annual operating budget.[xxiv]Secondly, if Montgomery County diligently collaborated with ICE to identify and deport illegal alien criminals, its policing expenses would drop.

In addition, experience has repeatedly demonstrated that, whether they say so or not, Montgomery County officials do not actually cooperate with ICE. In 2017, the Montgomery County Jail released Mario Granados-Alvarado – the illegal alien who broke into a police car and took a rifle and a shotgun — from custody – despite knowing that he was unlawfully present in the United States and being aware that ICE wished to arrest him.[xxv]More recently, it released illegal alien and accused rapist Rodrigo Castro-Montejo from custody despite having a hold request from ICE on file.[xxvi]

Those ill-considered releases are certainly consistent with statements made by Montgomery County Police Chief Marcus Jones who told reporters that a policy of not collaborating with ICE was in place prior to the issuance of the “Promoting Community Trust” Executive Order. He stated, “We have no direct contact with ICE about any immigration issues. We’re not doing any operations with ICE in Montgomery County.”[xxvii]  He also indicated that if ICE wants to deport someone in Montgomery County’s custody, it must do so without the assistance of county officials.

In response to the buck-passing officials who run Montgomery County, USCIS Acting Director Cucinelli tweeted, “I’ll defend children and crime victims, Elrich can defend rapists and murders who shouldn’t even be in this country.”[xxviii]And Mr. Cucinelli – who is an experienced prosecutor and former attorney general of Virginia – is taking the correct approach.

One of the most commonly used models of law enforcement management is called “broken windows policing.” It was first described by social scientists James Q. Wilson and George L. Kelling in a 1982 article published in The Atlantic Monthly.[xxix]In essence, they claimed that when law enforcement entities ignore low-level crimes such as vandalism, loitering and public urination, they create a climate of lawlessness that allows other, more serious criminal activity to flourish. The solution is to empower police officers to combat conditions that give rise to lawlessness, which creates an environment of public order.

The Trump administration is the first to apply the broken windows policing model to immigration enforcement. But it has been opposed at every turn by illegal alien advocacy groups, activist federal judges and state/local officials in sanctuary jurisdictions.

And one has to wonder, what kind of reductions in MS-13 gang activity would Montgomery County experience if it actively collaborated with ICE and U.S. Customs and Border Protection (CBP), rather than protecting immigration violators? By definition, any crime committed by an illegal alien is a preventable crime – if our immigration laws had been enforced, the illegal alien would not have been here to offend in the first place.

Consistent, open enforcement of our immigration laws demonstrates to all members of American communities that this is a nation of laws where criminal behavior is not tolerated. Sanctuary policies just result in state and local agencies aiding and abetting illegal aliens as they continue to violate our immigration laws. In addition, tolerating illegal immigration and providing a “safe haven” for illegal aliens is unfair to those immigrants who respect our nation’s laws and waited in line for years to come to the U.S. legally.

It is time for Montgomery County to put an end to its illegal alien crime wave and to start focusing on the interests of law-abiding U.S. citizens and legal immigrants that live within its boundaries.

For decades, open-borders advocates have claimed that fear of deportation means illegal aliens are inherently pre-disposed to avoiding criminal behavior. And despite data to the contrary, they have continued pushing the narrative that “illegal aliens = less crime.” That is nonsense.

People who break the law to enter the United States are not suddenly inclined to obey it once they cross the border. And Montgomery County is a textbook case-in-point that clearly demonstrates a significant connection between illegal aliens and crime.

[xii]“What Happens To An Illegal Alien With A Stolen Police Rifle In A Stolen Car In Montgomery County, Maryland?” RedState, May 8, 2017, https://www.redstate.com/streiff/2017/05/08/maryland-illegal-stolen-police-rifle/.