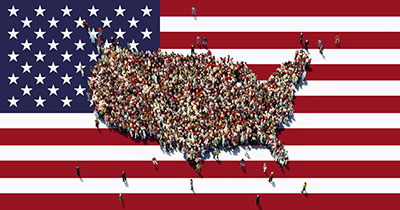 Although the population of the United States – 327 million in 2018 – is the third largest in the world, Americans are constantly told by various analysts and politicians that America needs more people and, therefore, more immigration. While FAIR and other organizations have been consistently refuting this false and irresponsible narrative, pro-American immigration reformers often face an uphill battle in this regard. This is because there are numerous powerful, influential, and vociferous lobbies promoting population growth through mass immigration.

Why does Congress not act to limit mass immigration? As is usually the case with otherwise inexplicable public policy decisions, the answer lies with lobbies. Following is a list of influential special interest lobbies that have successfully lobbied for immigration-fueled population growth.

Labor unions have been losing membership for over half a century. Gone are the days when the labor movement opposed mass immigration and the importation of cheap foreign labor. Currently, the AFL-CIO supports amnesty for America’s 12.5 million illegal aliens and immigration expansion. In California, the unions are even attempting to shield illegal aliens from deportation. Recruitment of immigrant workers is seen as a growth opportunity, although an increase in foreign guest workers, which industry wants, does not fit that profile. While the power of the unions may grow with more members, increasing the labor pool through immigration reduces the bargaining leverage of individuals and translates into stagnating or falling wages and working conditions for American workers.

Many advocacy groups support immigration increases and amnesty for illegal immigrants, while opposing enforcement measures aimed at denying jobs to illegal immigrants, such as the E-Verify system. These groups include “ethnic advocates” such as the National Council of La Raza and the Arab-American Anti-Discrimination Committee. Others with a similar agenda include religious groups, with the Roman Catholic Church — which like the unions is also coping with a membership decline despite a fast rising share of immigrant members — at the forefront. The Interfaith Immigration Coalition – which groups over fifty Protestant, Catholic, Jewish, and Muslim organizations – is also pro-mass-immigration and pro-amnesty, while the Church of Jesus Christ of Latter-day Saints adheres to an equivocal position on immigration. Advocacy lobbies generally promote legislation that benefits the continued growth of their particular constituency.

“The world’s largest business organization” has long championed cheap labor and open borders. In addition to supporting general amnesty and mass immigration, the Chamber also supports increased immigration and temporary guest worker programs. The Chamber has softened its initial opposition to mandatory E-Verify – which assures that jobs go only to legal workers – but nevertheless makes it conditional upon being “coupled with a workable agricultural guest worker program.”

Several industries promote specific types of immigration. These include:

While many lobbies promote increasing the U.S. population through mass immigration because it offers them numerous economic and institutional advantages, the policies they support are extremely short-sighted. For example, mass immigration is often floated as a way to bail out such unfunded liabilities as Social Security and Medicaid. Yet, even some cheerleaders of this idea admit that it is only a temporary fix. What they fail to acknowledge is that immigrants are no less susceptible to the process of aging than native-born Americans. This means that they too will be eligible to collect benefits once they reach retirement age. In addition, due to our current chain migration policies, working-age immigrants frequently sponsor retirement-age relatives. Rather than solving the problem, this only exacerbates it.

In fact, as the Center of Immigration Studies points out: “It is possible for immigration to maintain the current working-age share or ratio of workers to retirees, but it would roughly require net immigration five times the level projected by the Census Bureau through 2060. This would create a total population of 706 million in 2060 — more than double the current population.” CIS also found that “fertility rates have declined much more rapidly among immigrants than the native-born. As a result, immigration’s modest impact on slowing the aging of America is becoming even smaller.”

Last but not least, if maintaining population growth is a priority, why not implement policies encouraging native-born Americans to have more children? Perhaps reducing some of the pressure that mass unchecked immigration exerts on working- and middle-class Americans – in the form of depressed wages, intense job competition, and other factors – will help those Americans who want children but fear they cannot afford them?

The bottom line is that interest groups and lobbies benefit from a seemingly never-ending influx of potential new consumers, workers, and members. However, it is ultimately ordinary Americans and – in some ways – many immigrants themselves who pay the price. In other words, population growth through mass immigration is a classic case of concentrated benefits and diffuse costs.