The novel coronavirus (COVID-19), which originated in China’s Wuhan Province, has spread worldwide.[1] The World Health Organization has reported confirmed infections in more than 100 countries, numbering more than 180,000 affected individuals with more than 7,000 deaths attributed to the disease.[2]

The initial cases outside China were transmitted by travelers returning from The People’s Republic. Individuals infected through contact with people who had been in Wuhan Province then infected others as they coughed and sneezed. This is neither an expression of xenophobia, nor an excuse to exclude migrants as “carriers of disease.” Rather, it is a simple fact of human biology.

In an age when significant parts of the world have access to clean water, high quality health care and antibiotics, it’s easy to forget that microbes accompany people and goods moving over national borders. But the fact remains, most illnesses are spread by contact with infected people, livestock or agricultural produce. And, as FAIR has repeatedly noted, efforts to control infectious disease should be a fundamental part of our nation’s border security plan.[3]

The United States thrives because of the international movement of goods and people. Our economy has been international since the founding of the original thirteen colonies and it remains so today. But that means that our border has always been, and will always be, a possible gateway for outbreaks of infectious disease.[4] Both of our neighbors, Canada and Mexico, have struggled with pandemics that could have easily hopped the border.

In 2003, Severe Acute Respiratory Syndrome (SARS) broke out in Toronto. And, despite Canada’s very high standard of medical care, it struggled mightily before it was able to bring the epidemic under control. Mexico has also struggled with pandemics in the past. As recently as 2019, the country experienced an outbreak of 10,355 severe cases of dengue fever in the rural State of Chiapas.[5] Mexico was able to bring the outbreak under control only because it had international assistance through the Pan American Health Organization.

So, while we need to be aware of the well-known pandemic threats emanating from developing nations, we should also be cognizant of the possibility that an epidemic could start in virtually any country on Earth, even those with the most sophisticated medical establishments. The key preventative measure is not banning travel from any particular nation, except in the case of an active outbreak. Rather, it is being generally aware that – as the COVID-19 outbreak shows – moving people can spread a new infection. That being the case, public health surveillance should be a key part of the inspections process for all people traveling to the U.S. from abroad.

According to the Centers for Disease Control and Prevention, COVID-19 “is thought to spread mainly from person-to-person.” The primary route of transmission is “between people who are in close contact with one another (within about six feet)” via “respiratory droplets produced when an infected person coughs or sneezes.”[6]

This means that public conveyances, including airplanes, buses and cruise ships, are ideal environments for COVID-19 to spread. Travelers aboard planes, motor coaches and seaborne vessels are typically in close contact with each other and are often breathing air that is recirculated through climate control systems. 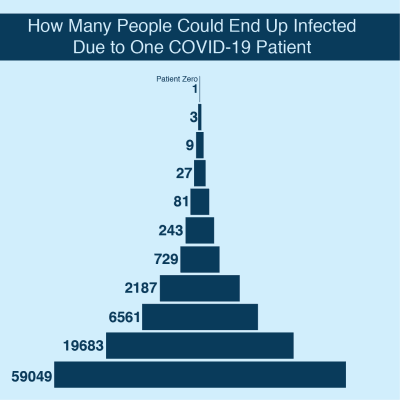 And, once they arrive in the United States, travelers frequently rely on public transport to get them to and from airports, bus depots and seaports. Cabs, local buses and subway systems all place travelers in close contact with other travelers, as well as vehicle operators. One individual who has acquired COVID-19 abroad can infect many, many other individuals on his/her way to a final destination.

In a nutshell, the U.S. should be as worried about inadvertently admitting a pandemic virus into the United States as it is about unwittingly letting in terrorists, criminals and spies. The only problem is that, without proper counter-measures in place, pathogens can be much more difficult to detect than bad guys.

Historically, Public Health Screening Was a Part of the Immigration Process

Our forebears understood this. Far from being a mechanism for excluding “undesirable” migrants, health screening in the Ellis Island era was intended to protect both immigrants and Americans from communicable disease.

From 1864 to 1892, sick aliens arriving in New York City were treated at the state-of-the art Ward’s Island Emigrant Hospital, which was designed according to the hygiene-maximizing layout advocated by Florence Nightingale in her Notes on Hospitals. In fact, the facility was lauded by the New York Times as one of the most advanced hospitals in the United States.[9]

Several years later, the federal government built the Immigrant Hospital on Ellis Island, which was staffed with doctors and nurses from the Marine Hospital Service — the precursor to today’s U.S. Public Health Service (USPHS). That facility eventually became the first USPHS Hospital, employing novel techniques like using an autoclave to sterilize medical instruments, employing radiation to sterilize mattresses and bed linens, and setting up an isolation ward to quarantine those with highly communicable diseases.[10]

Both of the New York hospitals, along with similar facilities at San Francisco’s Angel Island and Boston’s East Boston Immigration Station, furnished many immigrants with modern health care and dental care for the first time in their lives. In addition, many newborns entered the world in these clean, modern clinics, under the well-trained eyes of USPHS obstetricians, pediatricians and registered nurses.

By the 1950s, immigrants began traveling to the United States on commercial aircraft, rather than on steamships. And by 1954, Ellis Island had discontinued all operations. With the closure of those facilities, mass public health screening of immigrants ceased.[11]

Should Public Health Screening Still Be Part of an Immigration Inspection?

Yes, it should. But, at present, only individuals applying for Lawful Permanent Resident status and those hoping to enter the country as refugees are required to undergo health screening.[12]

However, in the face of increasingly frequent outbreaks of swine flu, SARS, Middle East respiratory syndrome (MERS) and other highly contagious diseases of public health significance, the Department of Homeland Security should be taking the connection between immigration and public health much more seriously.[13] If it doesn’t, the U.S. may inadvertently wind up granting admission to a highly contagious disease like COVID-19.

The Immigration and Nationality Act still requires the exclusion of individuals who have a “communicable disease of public health significance,” as well as the exclusion or removal of those who possess “no documentation to prove vaccination.”[14] Rather than treating those provisions as “back-up” authorities, to be used only in the case of an outbreak, U.S. Customs and Border Protection (CBP) should view them as a general mandate to protect the public health of the United States.

Currently, we dedicate a significant amount of money and effort to conducting agricultural inspections at land, sea and air ports of entry. CBP employs approximately 2,200 agriculture specialists to protect the United States from pests, as well as plant and animal diseases that could harm our food supply. However, in the absence of a disease epidemic, it is rare to find a medical professional from the U.S. Public Health Service assigned to an airport to conduct public health inspections. And it’s not like the government hasn’t acknowledged the threat. The CDC maintains a Quarantine Division, which publishes a public health screening manual for use by inspections personnel from the Department of Homeland Security, Department of Agriculture, and the Fish and Wildlife Service.[15]

So, how come we don’t do public health screenings of arriving travelers anymore? The answer: Life moves at a quicker pace than it did in the age of Ellis Island. President Calvin Coolidge once said, “…the chief business of the American people is business. They are profoundly concerned with producing, buying, selling, investing and prospering in the world.” [16] Policy-makers are justifiably concerned about the economic impacts of long delays at ports of entry, which could hamper business travel, cripple the tourist industry and interfere with the international shipment of goods.

But this is a stark example of faulty logic in action. Public health inspections were accomplished quickly and effectively at Ellis Island, in the age of mercury thermometers, primitive diagnostic laboratories and hand-written medical records. Surely, a high-tech economic power like the United States could implement a high-tech public health screening program that imposes only minimal delays on people and goods entering the U.S.

The few extra minutes spent on such measures might save the U.S. – and other countries – from the lengthy travel restrictions and quarantines associated with the 2003 SARS outbreak and the current COVID-19 epidemic. And the fact is, travel moratoria and quarantines cost billions of dollars more than a thoughtful, innovative and well-administered program to identify travelers who are either sick or have been exposed to a communicable disease.

[3] “Is the U.S. Prepared for an Immigration-Related Outbreak of Communicable Disease?” Federation for American Immigration Reform, August 2017, https://www.fairus.org/sites/default/files/2017-08/IssueBrief_Immigration_and_Disease_Outbreak.pdf.

[8]  Rachael Rettner, “How does the new coronavirus compare with the flu?” Live Science, Updated March 6, 2020, https://www.livescience.com/new-coronavirus-compare-with-flu.html.

[16] Ellen Terrell, “When a quote is not (exactly) a quote: The Business of America is Business Edition,” Library of Congress, January 17, 2019, https://blogs.loc.gov/inside_adams/2019/01/when-a-quote-is-not-exactly-a-quote-the-business-of-america-is-business-edition/.

FAIR needs your support now more than ever. Consider giving a donation and joining the fight to fix our broken immigration system.