With the election of President Donald J. Trump, immigration has finally been brought to the forefront of our national political debate. The Trump administration has acknowledged the significant economic and national security consequences of uncontrolled mass migration. In response, members of Congress have begun proposing legislative frameworks to revamp our immigration system and make it work for the American people.

Arkansas senator Tom Cotton and Georgia senator David Perdue recently introduced the Reforming American Immigration for Strong Employment, or RAISE Act.[1]  Although not intended as a fix-all, if passed, this legislation would take significant steps toward moving the United States to a “merit-based immigration system.”

Currently, the U.S. uses a two-track immigration scheme. A small number of green cards are issued each year to individuals who have been offered certain types of qualifying employment in the United States. So while the U.S. does have employment-based immigration, the bulk of American immigration policy is based on an overly broad notion of family reunification. Far more green cards are issued to people who have qualifying family members already in the country than those seeking skilled employment in the U.S.  The result of this set-up is “chain migration.” When the U.S. admits one family member, it triggers a chain that leads to the immigration of multiple family members, who may then file for members of their extended families to immigrate, and so on.

The problem with chain migration is that while the United States retains the ability to say “yes” or “no” to individual immigrants, the pool of immigrants is self-selecting. In other words, most immigrants are admitted because they wish to come here and have a relative who sponsors them. They are not chosen specifically because of what they might be able to contribute to our society or what the U.S. needs. Accordingly, the economic and national security needs of the United States would be much better served by a merit-based system which requires immigrants to meet a specific set of criteria before even being considered for admission to the United States.

Most merit-based systems (also referred to as “points-based systems”) award points for positive attributes, and aliens are required to reach a minimum score in order to be eligible to migrate.[2] Specific immigrants are then chosen based upon the needs of the receiving country.

Typical examples of the eligibility criteria are:

Merit-based immigration systems are in use in the following countries: 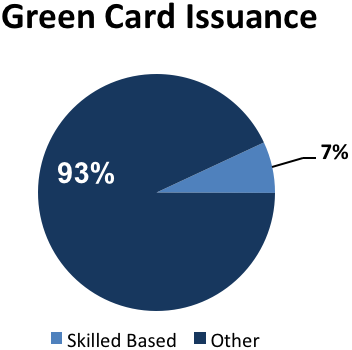 The advantage of merit-based immigration systems is that they allow the receiving country great flexibility in responding to shifting labor and economic needs. Due to their language, education, age and financial requirements, they also encourage more efficient assimilation of migrants into the local and national community.

As it now operates, our immigration system is based on nepotism. We admit immigrants who already have family members in the country. We do not make immigration decisions based on whether or not an immigrant can contribute to our economy or has some remarkable talent that would benefit the nation. In 2013, only 7 percent of green cards issued were skills-based. In order to genuinely improve our immigration system, family-based immigration must be limited to spouses and unmarried minor children of green card holders. The RAISE Act is the essential first step in ensuring real immigration reform.