Refugees are people who are authorized to come to the United States because they are determined to be fleeing individual persecution by their home government. To qualify as a refugee, a person must meet the following definition from Section 101(a)(42) of the Immigration and Nationality Act: “any person who… is unable or unwilling to return to, and is unable or unwilling to avail himself or herself of the protection of that country [their home country] because of persecution or a well-founded fear of persecution on account of race, religion, nationality, membership in a particular social group, or political opinion….”

Although the United Nations has identified nearly 12 million individuals as current refugees, that number can grow exponentially overnight. That’s why it’s widely accepted that only a fraction of those who qualify as refugees will be resettled in the West. 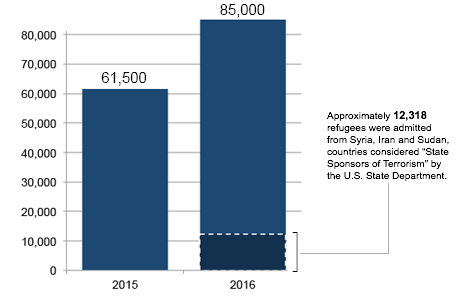 Over the last decade (FY2005-2015), the U.S. admitted nearly 61,500 refugees annually. That number was dramatically increased in 2016, when the Obama administration pushed for a huge uptake in Syrian refugees. In 2016, roughly 85,000 refugees were resettled in the U.S. Approximately 12,318 of them hailed from Syria, Iran and Sudan, countries considered “State Sponsors of Terrorism” by the U.S. State Department.

What is the difference between a refugee and an asylee?

The distinction between a refugee and an asylee is that refugees apply for entry to the U.S. from abroad, and asylees are already in the U.S., legally or illegally, when the application is made. The distinction generally requires that refugees apply for protection from outside their home country, though in some instances the U.S. accepts applications from people while still in their homeland.

What is the most effective way for the U.S. to help people who are legitimately fleeing persecution?

There are many things to consider when determining how we should prioritize resettlement, including finding out who is in the most imminent danger, who is least likely to be able to return home, and who can be effectively screened to ensure they do not pose a danger to the United States.

Instead of focusing on permanent resettlement of refugees, efforts should focus on helping displaced populations take temporary shelter as close to their home countries as possible. The U.S. Committee for Refugees has estimated that a day’s worth of funding needed to settle a single refugee in the U.S. would cover the needs of at least 12 refugees abroad. Thus, assisting displaced individuals abroad, rather than admitting them to the U.S. for permanent resettlement, allows us to protect and assist far more people.

What are the risks associated with resettling refugees?

By allowing a mass migration of refugees, particularly those from places where religious or political violence is endemic, we open ourselves up to possible terrorist threats. Oftentimes we cannot perform proper screening or background checks on these refugees, because in some cases they arrive without any form of identification and hail from countries that are not cooperative with the U.S. Thus it’s often nearly impossible to distinguish legitimate refugees from terrorists.

For instance, two al-Qaeda linked refugees living in Bowling Green, Kentucky, had been admitted for resettlement despite the fact that they had targeted and killed U.S. soldiers in Iraq. And many U.S. intelligence officials, including CIA Chief John Brennan, have noted that terrorists are using refugee flows to infiltrate the West.

The challenge for our refugee policy is, amid the complete chaos in the sending countries, to be able to sort out the innocents from those who are responsible for mayhem or terror.

Do we have a moral obligation to admit refugees/asylees?

The U.S., like other wealthy nations, has a moral obligation to help as many refugees as possible. But relocating those individuals to the U.S. is by far the most expensive option, and helps the fewest number of people. The U.S. will continue to admit refugees, but we also have an obligation to our citizens to ensure that those who are being admitted as refugees are both legitimate and not a threat to national security or personal safety.

Although many state governors have said their states will refuse to accept Syrian refugees, it would take action by the federal government to block their arrival. Under Section 412 of the Immigration and Nationality Act (INA), states do not have the authority to refuse foreign nationals who have been granted refugee status. Governors are urging Congress to use its legislative authority to prevent federal tax dollars from being used to fund the initiative.

The Refugee Act of 1980 controls current refugee policy. They were designed to address the political realities of the Cold War era, in which persecution was most often perpetrated by powerful and repressive central governments. These governments actively prevented their citizens from leaving.

Currently, millions of individuals are being displaced as a consequence of the breakdown of government control in a growing number of countries around the world. In their place, violent militias driven by religious fanaticism, ethnic separatism, criminal enterprise, and other factors are wreaking havoc on people in a rapidly increasing number of failed states. These religious, nationalist and criminal insurgents, and the weak governments they are challenging for power, actively encourage mass outflows of migrants.

However, not every migrant fleeing a bad situation abroad meets the definition or intent of a “refugee” under federal law. Rather than rushing to permanently resettle them in the U.S., our laws should be updated to allow the nation to respond to humanitarian crises, while protecting vital national interests.

Possible alternative options to resettling refugees in the U.S. include:

What sort of benefits do refugees receive?

When arriving to the U.S., refugees are placed with a private resettlement agency, which guarantees them food, housing, clothing, employment services, medical care, and any other services deemed necessary for the first 90 days. Refugees are also eligible to receive cash for the first eight months of their stay in the U.S. In addition, refugees under 18 can attend public school free of charge and are eligible for in-state tuition for colleges and universities. Though popular opinion claims refugees are coming to the United States for temporary relief from their home country, they are actually admitted on a permanent basis. Moreover, refugees are granted benefits, required to apply for a green card after one year, and are eligible to become a citizen after five.

In light of recent terrorists attacks, the frank acknowledgements from intelligence officials here and in Europe, and the growing number of displaced persons across the globe, the U.S. must be very cautious in its plans to resettle large number of refugees – particularly those who hail from “high risk countries” to the U.S. Here’s why:

1    The Center for Immigration Studies estimates that on average, each Middle Eastern refugee resettled in the United States costs an estimated $64,370 in the first five years, or $12,874 per refugee per year.