While certain states allow illegal aliens to obtain licenses, others take no action as illegal aliens take to the roads without licenses. As traffic fatalities rise across the country, from accidents and hit-and-run incidents up 3.5 percent from 2000 to 20051 it is clear that the growing presence of illegal aliens is contributing to this problem.

Ten states do not require lawful proof of presence for an applicant to obtain a driver’s license. These states are Hawaii, Maryland, Michigan, Montana, New Mexico, North Carolina, Oregon, Utah, Washington and Wisconsin.2 Despite this, in these 10 states 14.4 percent of those who cause traffic fatalities are not licensed or improperly licensed, compared to the national average of 13.6 percent.

Approximately 20 percent of all car accidents nationwide involve a driver who lacks a valid license.3 In the ten states with the highest concentration of illegal immigrants, (according to FAIR’s most recent estimates: California, Texas, New York, Arizona, Florida, Illinois, Georgia, North Carolina, New Jersey and Colorado) 14.6 percent of driving fatalities are caused by an unlicensed or improperly licensed driver. Furthermore, the percentage of those killed by hit-and-run drivers is higher in these states, 6.1 percent compared the national average of 5.3 percent. Needless to say, because data on whether drivers were licensed or uninsured or inebriated can’t be collected on those who leave the scene of an accident, the data would likely show a higher incidence of unlicensed and uninsured drivers causing accidents if that data were available.

Below, a chart coding the number of hit-and-run fatalities per state illustrates the existence of a higher hit-and-run percentage in states with higher illegal alien concentrations. Even in the 10 states where illegal aliens are permitted to obtain driver’s licenses, the average percentage of hit-and-run accidents is 4 percent. Having a license certainly doesn’t create a law-abiding or safer group of drivers. 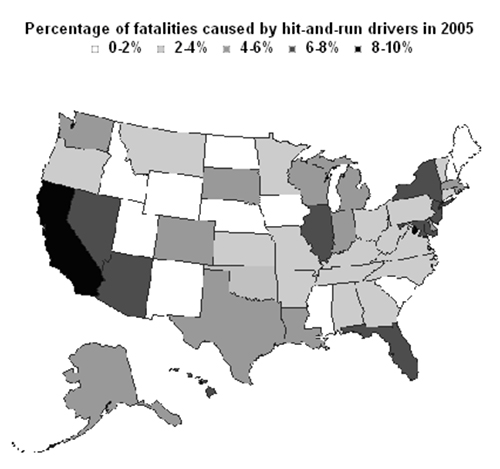 Hispanic and Latino drivers were killed by hit-and-run drivers in numbers disproportionate to their share of the population. They were 21.4 percent of fatalities in 2005, while this group only makes up 14 percent of the population. The higher fatality rates suggest that Hispanic and Latino drivers are more likely to live in a community or environment where hit-and-run accidents are more prevalent.

Not only can dangerous drivers put people around them at risk, they can also put themselves at risk. Data show that Native American and Hispanic or Latino drivers who died in traffic accidents were legally intoxicated 57 percent and 47 percent of the time respectively, compared to black, white and Asian drivers who averaged 35 percent. Fatally injured Hispanic or Latino and Native American drivers were less likely to hold a valid license compared to black, white or Asian drivers.

[6] San Jose Mercury News. “Driver escapes charges in death: Victim’s Family Angry after Hit-and-Run incident that killed Gilroy teen on vacation in Mexic”. Mar. 25, 2005 “According to Commander Carlos Perez of the Playa del Carmen (Mexico) Police Department, commenting on a hit-and-run accident that killed an American, the Mexican driver who later turned himself in, “…‘didn't notice when the person crossed the traffic lane, he couldn't help but run him over,’… [and Perez] noted that hit-and-run isn't considered a violation in Mexico.”

Citizens of Other Nations Being Used to Disenfranchise New Yorkers, Charges FAIR

RT @USBPChiefTCA: A tremendous #TeamEffort gets the job done.

Why are thousands of U.S. citizenship applicants in limbo? Because their paperwork is stuck in underground federal… https://t.co/tLebGfcJJ2