2020 Update: How Many Illegal Aliens Live in the United States?

This report has been updated. Click here to read the new report.

By Spencer Raley, Madison McQueen, and Jason Pena | Click here for the PDF version of this fact sheet

As of 2020, FAIR estimates that there are approximately 14.5 million illegal aliens residing within the United States. This number is marginally higher than FAIR’s previous estimate of 14.3 million in 2019.

Based on FAIR’s most recent comprehensive fiscal cost study, illegal aliens are likely imposing a net fiscal burden of at least $133.7 billion.[1] That’s an increase of nearly $2 billion over the past year.

Despite these alarming figures, the increase in the illegal alien population grew at a lower-than-expected rate. This can be attributed to a variety of reasons, including: 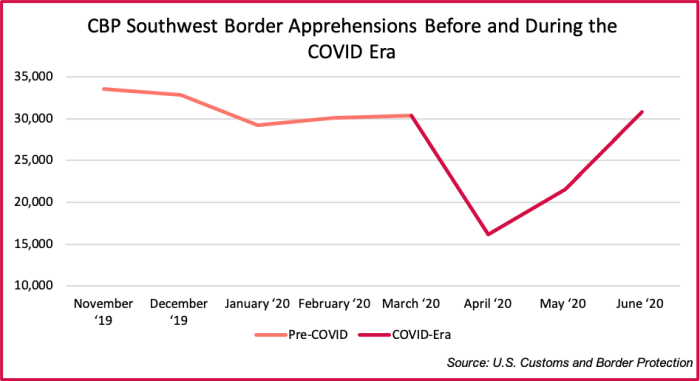 Several issues persist that continue to drive illegal aliens into the United States or encourage them to stay here. These include:

President-elect Joe Biden pledges to dramatically decrease immigration enforcement, remove methods of deterrence, and offer amnesty to millions of illegal aliens. Due to these promises, FAIR projects that the illegal alien population under a Biden administration will increase dramatically.[4] More information can be found about President-elect Biden’s plans to dramatically increase legal and illegal immigration in FAIR’s report “By the Numbers: How the Biden/Harris Immigration Platform Will Fuel a Staggering Increase of Immigrants and Population Growth.”[5]

Estimating the size, distribution, and characteristics of the illegal alien population is an inexact science. The methods used by those claiming to have calculated a definitive figure should be viewed skeptically due to the fact that there is no completely reliable source of information on illegal aliens. The Department of Homeland Security (DHS) only (loosely) counts foreign nationals who enter and leave the United States in a lawful manner. In truth, we do not know exactly how many people cross the border unlawfully and evade immigration authorities. We can only estimate these figures based on how many individuals U.S. Customs and Border Protection (CBP) and Immigration and Customs Enforcement (ICE) believe slip through their detection.

Most current estimates regarding the total number of illegal aliens are based on U.S. Census Bureau data or survey data collected by private research organizations. Far too many of these studies presume that nearly all unlawful migrants respond to demographic questionnaires and that they provide accurate information to federal census agents. As people whose very presence in the United States is an ongoing violation of law, many illegal aliens understandably see no personal value in revealing any information about their legal status. Therefore, when asked about how, when, and why they entered the United States, illegal aliens have a strong motive to either lie, claiming they are lawful migrants or citizens, or refuse to respond at all.

Indeed, there are few mechanisms in place to verify the accuracy of the information respondents provide. Because of this, the Census Bureau’s weighted results from the “American Community Survey” (ACS) can vary by millions, depending on what information is requested and how questions are phrased.[6] Because of this, it is important to not solely rely on Census-related information.

To determine FAIR’s estimate of the total number of illegal aliens in the United States, we first calculated an approximate total number of all foreign-born residents currently presumed to be living here. In order to do this, we first analyzed the latest relevant information available from the Census Bureau’s 2018 ACS.[7]

So, after we subtracted the total number of lawfully present migrants in the country from the total foreign-born population to reach our base illegal alien population, we assume that this total is underestimated by approximately 30 percent.[9][10] We then estimated the net number of illegal aliens suspected to have entered the country since 2018. We do this by applying estimates from CBP, ICE, and other federal agencies regarding how many illegal aliens successfully enter the country balanced against how many are apprehended and deported. Finally, after combining these two numbers, we reached our estimate of 14.5 million.

It is important to define exactly who is and is not an illegal alien because many organizations deliberately misclassify some illegal aliens in a dishonest effort to portray that population as smaller than it is in reality. Many organizations and mainstream media sources incorrectly classify unaccompanied alien minors (UAMs), recipients of Deferred Action for Childhood Arrivals (DACA), and/or those with Temporary Protected Status (TPS) as being lawfully present in the United States.

Such classifications are inaccurate. Individuals who have been granted any form of deferred action or who have received TPS have not been granted “lawful status.” Rather, federal immigration authorities have acknowledged their unlawful presence and have opted to defer their removal from the country temporarily. These types of limited relief from removal are subject to revocation or rescission in a wide variety of circumstances.

FAIR offers a detailed explanation of who should be considered an illegal alien in a study titled “Why ‘Illegal Alien’ is the Correct Term.”[11]

Where Do Illegal Aliens Live in the United States?

Unsurprisingly, illegal aliens tend to live near the United States’ border with Mexico or in states with sanctuary policies that offer welcoming environments and protection from immigration enforcement. The ten states with the largest estimated illegal alien populations account for just under three-fourths (71%) of the national illegal alien total.

However, this is not to suggest that states which hold a comparatively small share of the illegal alien population are unaffected by its negative effects. In fact, as FAIR has pointed out in other studies, illegal immigration often hits these states the hardest.[12] 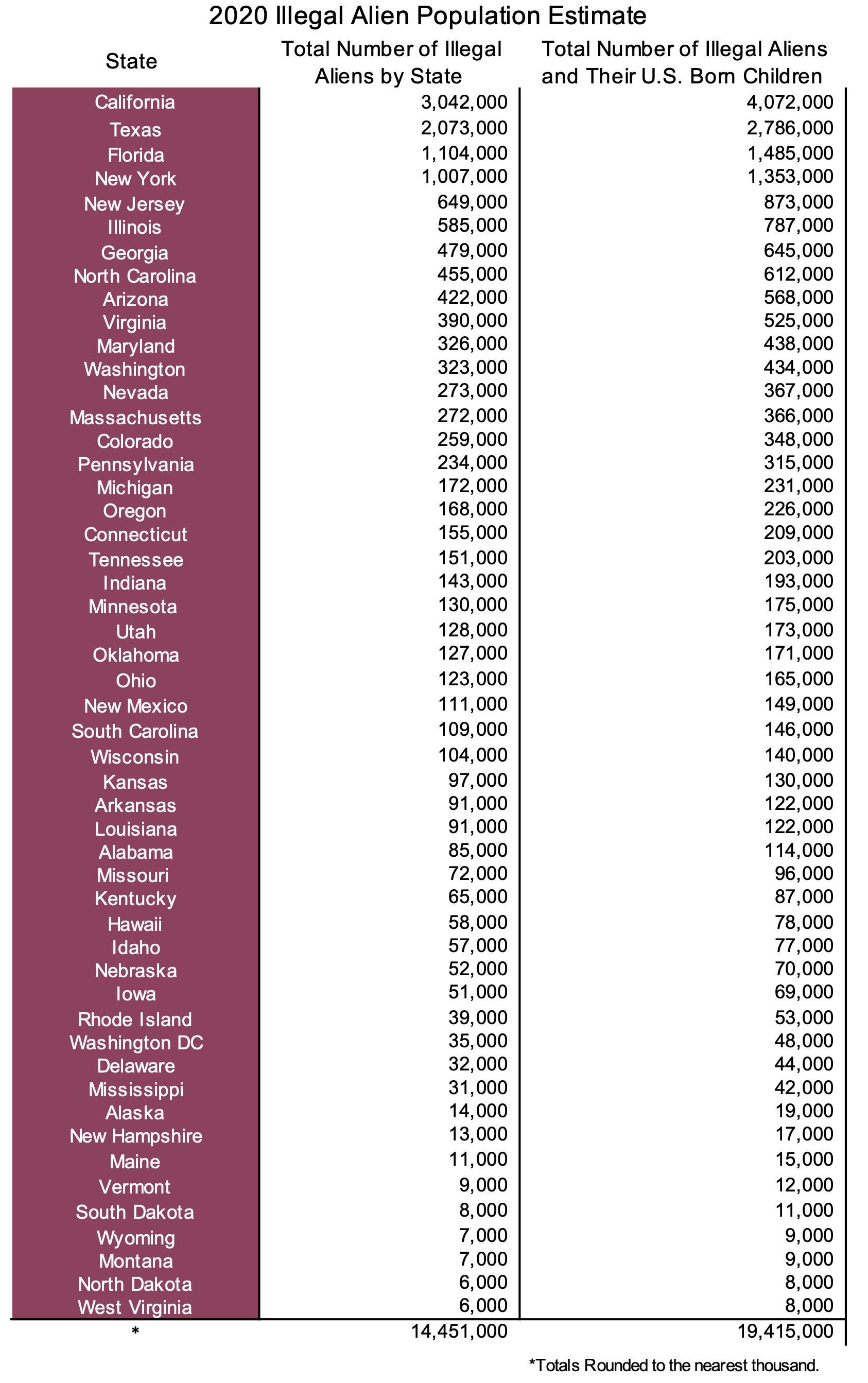 [2] Robert Warren and Donald Kerwin, “The 2,000 Mile Wall in Search of a Purpose: Since 2007 Visa Overstays have Outnumbered Undocumented Border Crossers by a Half Million,” Center for Migration Studies, 2017, https://cmsny.org/publications/jmhs-visa-overstays-border-wall/.

[4] Our projection includes those illegal aliens who might receive amnesty from the Biden administration.

[5] Spencer Raley, Madison McQueen, and Jason Pena, “By the Numbers: How the Biden/Harris Immigration Platform Will Fuel a Staggering Increase of Immigrants and Population Growth,” Federation for American Immigration Reform, September 2020, https://www.fairus.org/issue/amnesty/numbers-how-biden-harris-immigration-platform.

[6] Basing the total number of foreign-born residents in the United States on responses to the ACS question requesting citizenship information yields a weighted total that is more than two million individuals lower than when the estimate is based on survey questions regarding how long respondents have lived in the country.

[9] To estimate the total number of lawful migrants in the United States, we examined both data from the ACS and the comprehensive “Yearbook of Immigration Statistics” published annually by the DHS. This is the approach most commonly used by other reputable organizations that produce estimates on this matter. Our totals closely resemble the most commonly reached estimate of roughly 35.2 million.

[10] As noted earlier in this study, most professional statisticians considered 30 percent to be the most accurate assumption for how many illegal aliens are typically missed by the Census. This is also approximately the figure used by the Federal government in their most recent projections.