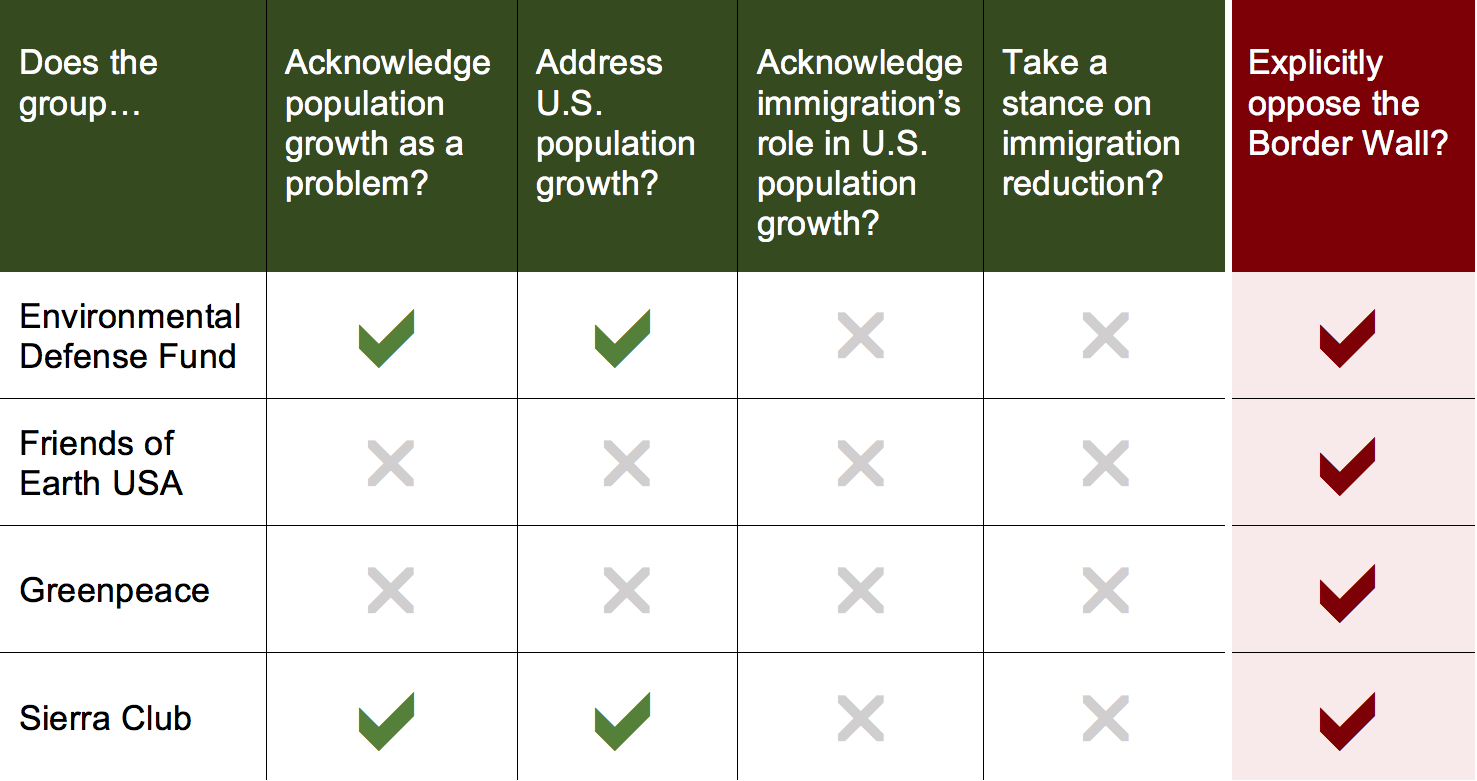 In an age when so many Americans are rightly concerned about pollution and the health of the environment, the undeniable negative impact that immigration has on this issue continues to go largely ignored. This is due to a myriad of reasons, including social pressure and bullying by the open borders lobby, as well as powerful donors threatening to withhold future funds should environmental groups address the issue.

In this report, FAIR examined the stances of 25 environmental groups on immigration and population growth. In addition, we scrutinized official publications, board resolutions, websites, position papers and, in some cases, spoke directly with staff.

Since the passage of the Immigration and Nationality Act of 1965 eliminated many of the measures that regulated immigration into the country, the United States population grew by 70 percent.[i] According to Pew Research, more than half of this growth – 55 percent – was fueled by immigration.[ii] The same study estimates that 88 percent of the population growth in the United States by 2065 will stem from immigrants and their decedents.

Population growth has put an enormous strain on already overburdened U.S. water and energy supplies, as well as other natural resources. Additional uncontrolled immigration will put even more pressure on communities to expand at unanticipated rates, which means they have less time to adequately examine how such growth might impact the environment and local ecology.

New housing developments, roads, strip malls, etc., are encroaching on wildlife habitats. Additionally, our sprawling urban areas are crowding fragile coastal wetlands and paving over farmland at alarming rates in order to meet the needs of an increasing population.

Many environmentalists agree that population growth is a serious issue. However, most don’t speak out publicly for fear of alienating the social, economic, and religious constituencies who support policies that fuel population growth. This is particularly true when immigration reform enters the discussion.

This fear is not necessarily unfounded. Many who claim to care about the environment not only ignore the negative impacts that unchecked migration has on the issue, but also actively attack those who present empirical scientific evidence on the matter, insisting that they are “greenwashing hate.” These open borders activists insist that such facts must be ignored in order to protect their preferred mass immigration policies.

Even as immigration-driven population growth is swallowing up open space, taxing the environment, and causing increased pollution, waste, habitat destruction, and deforestation across the country, many of America’s leading environmental groups remain silent.

In some cases, this silence can be attributed directly to pressure from elite donors, such as David Gelbaum, who has given hundreds of millions of dollars to environmental groups in exchange for their silence on the immigration issue.

Gelbaum’s philanthropy includes approximately $200 million in donations to the Sierra Club.[iii] In an interview with the New York Times in 2004, he revealed that “in 1994 or 1995,” he told the Sierra Club’s Executive Director, “if they ever came out anti-immigration, they would never get a dollar from me.”[iv] In February of 1996, the organization decided to no longer take a stance on immigration despite strong resistance from its members.[v]

“if [the Sierra Club] ever came out [as] anti-immigration, they would never get a dollar from me.” –David Gelbaum, an open-borders investor who has donated at least $200 million to the Sierra Club

Of the 25 organizations examined, 12 talked about overpopulation in general, but only 7 addressed it as a problem in the United States.

The factors that deter open discussion of immigration are varied. Many groups want to avoid the controversy that comes from discussing immigration reform. Others fear offending major donors that are sympathetic to, or profit from, immigration. Furthermore, as previously noted, organizations also face the undeserved risk of being labeled “racist” by open border’s groups for their opposition to unsustainable immigration levels.

Environmental groups must not ignore the “elephant in the room.” Immigration policy is, in effect, population policy. Without slowing immigration — which fuels nearly all population growth in the United States — every environmental cause is ultimately a lost cause.

Without slowing immigration — which fuels nearly all population growth in the United States — every environmental cause is ultimately a lost cause.

We owe it to our children and grandchildren to take an honest, responsible look at American immigration policy. That doesn’t mean abandoning our humanitarian efforts to help those in other countries find a better life. Rather, it means responsibly designing immigration policies that ensure a healthy and sustainable future for our country.

FAIR is calling on environmental groups to join us in an open, honest public discussion about the impact of immigration on U.S. population growth and the environment. Community planning is crucial to protecting and managing the diverse and delicate ecosystems throughout the United States, and un-checked immigration policies make it nearly impossible.