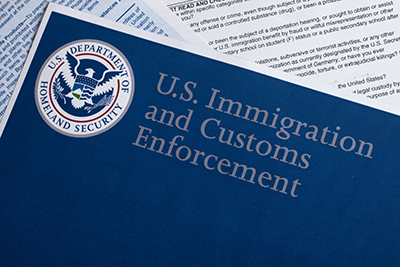 During the 2020 presidential campaign, Joe Biden was one of the few Democrats who would not outright commit to abolishing the Immigration and Customs Enforcement (ICE) agency, as demanded by the party’s radical left flank. Instead, after being elected, President Biden and his Homeland Security Secretary, Alejandro Mayorkas, moved to abolish most of the agency’s duties, making it next to impossible for ICE agents to arrest, detain and remove any of the estimated 15.5 million illegal aliens residing in the U.S.

But ICE agents, through their union, the National ICE Council, refused to remain silent as the Biden administration prevented them from doing their jobs and moved to protect nearly every illegal alien in the country. So, on August 11, The Swamp struck back.

In a nearly unprecedented move, the Federal Labor Relations Authority (FLRA) – an agency that governs labor relations between the federal government and its employees – abolished the National ICE Council. In doing so, FLRA leaves 7,600 ICE employees with no labor representation, no collective bargaining agreement, and no whistle-blower protection. Chris Crane, the president of the National ICE Council, charges that the action was instigated by the American Federation of Government Employees (AFGE), the umbrella organization representing unionized federal government employees. AFGE, in turn, falls under the umbrella of the AFL-CIO, which has increasingly supported open borders and sweeping amnesties for illegal aliens.

“There is no doubt that ICE and DHS leadership worked in unison with corrupt union bosses to make this happen,” Crane charged. “DHS and AFGE leadership both wanted desperately to silence ICE Council whistleblowers. Without a union, it’s doubtful those whistleblowers will have jobs much longer.”

The decertification of the National ICE Council was a clear case of political retaliation. The council has repeatedly butted heads with Secretary Mayorkas over his attempts to do away with immigration enforcement under the guise of setting priorities. And AFGE is clearly aligned with the Democratic Party, including support of politicians who openly call for abolishing ICE.

The National ICE Council has also been a thorn in the side of AFGE, accusing the federation’s leadership of placing their own political agendas ahead of the interests of the workers it purports to represent. The final straw may have been when the National ICE Council blew the whistle on AFGE itself. “We reported to the Department of Labor that union bosses at AFGE were allegedly spending dues money on prostitutes and strippers, sexually assaulting their own employees, engaging in payoffs and cover-ups, and other unlawful and egregious acts. It was supposed to be investigated. We were supposed to be protected,” said Crane.

The 7,600 ICE employees had sought independence from their hostile AFGE overlords. Instead, the retaliatory action certified by FLRA means that the already dispirited workers are left with no representation at all, and will have to form an entirely new union and start collective bargaining with the federal government from square one.

Ironically, as a candidate, Biden vowed to be “the most pro-union president.” His still-active joebiden.com website asserts that he supports “instituting financial penalties on companies that interfere with workers’ organizing efforts, including firing or otherwise retaliating against workers. Biden will… hold company executives personally liable when they interfere with organizing efforts, including criminally liable when their interference is intentional.” The website further asserts that his guarantee includes the right of “public sector workers to organize.”

But like everything else the Biden administration has done over the past year and a half, all promises take a back seat to the relentless pursuit of open borders and unchecked immigration.