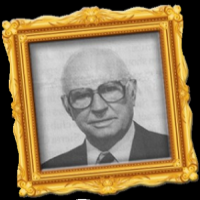 Founding board member, distinguished businessman, and philanthropist, Sidney Alton Swensrud ensured that his legacy would live on through FAIR’s work by creating a planned giving endowment fund. Mr. Swensrud had a lifelong passion about maintaining stable population growth in America, and recognized the important role immigration plays in future growth. He also recognized that global demographic pressures on America’s borders would continue to grow for the foreseeable future, and that FAIR must grow to keep up with the challenges those pressures would present. That is why Mr. Swensrud established a long-term endowment fund for FAIR that bears his name. All bequest and other planned gifts to FAIR become a part of the Swensrud Endowment Fund. It is an insurance policy for our nation’s future.

Jeannette Bromley cared deeply about America’s working families and appreciated FAIR’s work on their behalf. Despite a limited income, she faithfully gave $25 to FAIR every year. But Jeanette also had other non-cash assets in her estate plans to make a very meaningful legacy gift to FAIR that was much larger than her annual donations. After her passing, FAIR received a six-figure gift from her estate!

Patricia P. Greenwood began her support of FAIR in 1990 and was most passionate about fighting against amnesty for those who are living in our country illegally. Her commitment to FAIR’s work showed in her annual giving. Then we received a letter with one of her yearly donations saying she wanted to support our work in “every way possible.” So FAIR sent her information about the many ways she could support our work through a planned gift. After much consideration, Patricia purchased a $25,000 life insurance policy that named FAIR as the only beneficiary. This allowed Patricia to make a larger gift through her estate planning than she could have ever given during her lifetime. It is thanks to the unbelievable generosity of supporters like Patricia that FAIR is able to continue its important work year after year.

Howard Schultz started supporting FAIR’s work in 1998. His $25 per year contributions increased to $50 annually before his passing in 2012. Early in his support of FAIR he created a Charitable Remainder Trust and included FAIR as one of the trust beneficiaries. When Howard passed away, FAIR learned that the portion of the trust that was designated for FAIR resulted in a $300,000 legacy gift. This is another wonderful example of how someone might be able to give in a meaningful way through their estate. Howard’s gift became a part of the Swensrud Endowment and his support of FAIR lives on by helping to fund FAIR’s internship program to educate young Americans about immigration policy.