Unanimous rulings by the U.S. Supreme Court are exceedingly rare these days. But twice, in June, the high court handed down 9-0 decisions giving the government clear leeway to remove aliens who are in violation of our laws.

In the case of Sanchez v. Mayorkas, the Court was unanimous in its decision that illegal aliens who have benefited from protections granted under Temporary Protected Status (TPS) have not gained legal status in the United States and therefore cannot use that status to obtain a green card and eventual citizenship. 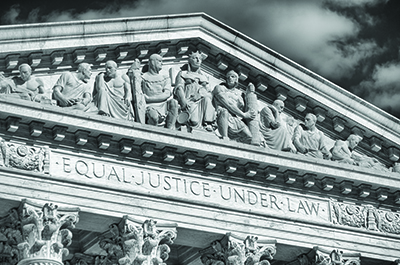 The Court noted that TPS is simply a temporary deferral of deportation, and does not in any way constitute a lawful means of residency in the United States. “Section 1255 generally requires a lawful admission before a person can obtain LPR (Legal Permanent Resident) status,” the decision, written by Justice Elena Kagan, an Obama appointee, noted. “Sanchez was not lawfully admitted, and his TPS does not alter that fact. He therefore cannot become a permanent resident of this country.” FAIR’s legal affiliate, the Immigration Reform Law Institute (IRLI), filed a friend-of-the-court brief, laying out many of the legal arguments that were ultimately adopted by all nine justices.

While the Supreme Court ruling makes it clear that TPS does not confer legal status on those who benefit from the designation, the problem remains that once granted, the status is routinely renewed long beyond the emergency situations that triggered TPS. These routine renewals have been granted by both Republican and Democratic administrations and, given the anti-enforcement stance of the Biden administration, current beneficiaries are not likely to be sent home.

In a second significant ruling, Barr v. Ming Dai, the Supreme Court unanimously overturned a ruling by the Ninth Circuit Court of Appeals that an alien’s testimony in his removal proceedings was presumptively credible and true, unless the immigration judge had explicitly found that it was not. Unsubstantiated claims by aliens facing removal that they would be persecuted if returned to the homelands are obviously self-serving, and the Court unanimously agreed that such claims do not have to be taken at face value. Again, IRLI laid out the legal arguments for why the burden of proof rests with the deportable alien, not with the government.