More than two months after Vice President Kamala Harris was tapped by President Biden to address the crisis at our southern border (which the administration still refuses to acknowledge as a crisis), she made her first public effort to solve the problem that she and the president created. In early June, the vice president paid a visit to Guatemala and Mexico. It could not have gone worse.

The White House billed her trip south of the border as the first salvo in the administration’s efforts to address the “root causes” of migration: the poverty, corruption and violence that grips the primary sending countries south of our border. In reality, the trip was a smokescreen to obscure the reality that chaos along our border is the administration’s policy in pursuit of its ideological goal of open borders and unlimited immigration. By Harris’ own admission, ending poverty, corruption and violence in the sending countries is a long-term proposition at best, and a transparent effort to deflect attention away from the administration’s own disastrous border and immigration policies. 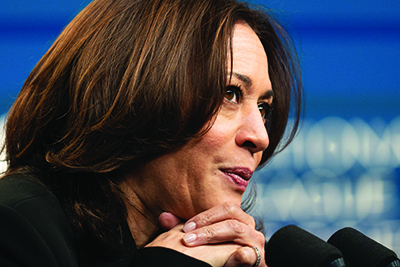 Upon her arrival in Guatemala, Vice President Harris was greeted by citizens holding signs reading, ‘Kamala Go Home,’ ‘Kamala Mind Your Own Business’, and ‘We Reject Your 860 Million Dollar Bribe to Our Corrupt Politicians.’ Her reception from President Alejandro Giammattei wasn’t much warmer. The Guatemalan leader placed the blame for the border crisis, and the human misery it is causing, squarely on the messages the Biden administration has been sending and the policies it has been implementing.

“Well, humanitarian messages were used here by the coyotes in a distorted manner because what they said over there was that they will promote family reunification. So the coyotes came and took the children and the teenagers to the United States and the borders were full, not only with people from Guatemala, but with a lot of people from all over,” Giammattei stated. Far from addressing the “root causes,” Giammattei implied, the Biden administration is exacerbating them by enriching the violent criminal cartels that run the human smuggling operations.

But then things got even worse for Harris. She sat down for a face-to-face interview with NBC News anchor Lester Holt. In keeping with the national news media’s kid gloves treatment of the Biden White House, Holt pitched her softball questions, failing to press her on whether the administration had any plan to deal with the immediate crisis, or even how realistic it was to think they could solve the myriad problems of other countries.

But her biggest whiff came on the question of when she or Biden plan to visit the border. After repeatedly insisting that she has already been to the border (but not as vice president or since she had been put in charge of managing this crisis), Harris flippantly responded, “And I haven’t been to Europe. And I mean, I don’t understand the point that you’re making.” The answer was so tone deaf that, according to CNN, even people in the White House were “perplexed” by the response.

As she moved on to Mexico, the next stop on her “root causes” tour, the reception was not much better. She arrived just after national elections in Mexico that were marred by unprecedented violence that included the murder of 88 political candidates during the campaign. President Andr s Manuel L pez Obrador has criticized the Biden administration for immigration policies that contribute to the strengthening of the criminal cartels responsible for the increasing violence in his country – concerns that we expressed directly to the vice president during her visit.

In the end, Vice President Harris’ first public effort to convince either the American public, or foreign governments that the administration has a viable plan to deal with the migration crisis – or that they even want to end it – failed miserably