More than 100 sheriffs and Angel Families gathered on September 28 in front of U.S. Customs and Border Protection (CBP) headquarters, at a rally organized by FAIR, to urge President Joe Biden to fire Homeland Security Secretary Alejandro Mayorkas for being derelict in his duties to secure our border and protect Americans. The day after the candlelight vigil, the sheriffs and Angel Family members participated in a conference that focused on the border crisis and the dangers it poses not only to border communities but every community nationwide. The vigil and conference were held in conjunction with FAIR’s annual Feet to the Fire. 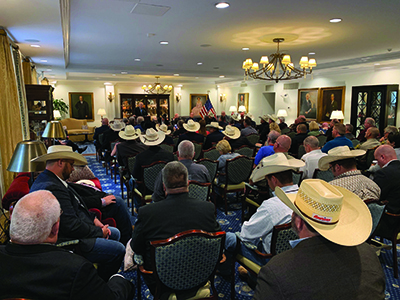 Speakers at the vigil included sheriffs and Angel family members, former high-level Department of Homeland Security officials, such as Mark Morgan (now a senior fellow at FAIR) and Tom Homan (now a senior fellow at the FAIR-affiliated Immigration Reform Law Institute), as well as members of Congress including Senator Ted Cruz (Texas), and Representatives Andy Biggs, Louie Gohmert, and Madison Cawthorn. FAIR’s candlelight vigil, remembering those who have been victimized by foreign criminals and the policies that allow them to remain in this country, received national media attention from Fox News and CNN.

The following day FAIR held a congressional roundtable at the Capitol Hill Club. Among the speakers were seven members of Congress including Minority Whip Steve Scalise and Representative John Rutherford, a former Duval County, Florida sheriff, as well as several sheriffs including a border county sheriff and a sheriff who is in the unique position of being both an Angel family member and law enforcement.

Representative Rutherford made it clear in his remarks that Biden administration’s immigration policies are not “failed policies” but are their intentional policies. He also encouraged the sheriffs to meet with him on legislative fixes to the crises in their communities resulting from Biden’s open-borders policies.

At the afternoon briefing, Brandon Judd, representing rank and file Border Patrol officers, highlighted how the cartels are controlling our borders by sending families and unaccompanied children across the border to seek asylum, which requires the border agent to leave the border and transport and process those aliens. Once the agent leaves the border, the cartels are trafficking drugs and people across the unpatrolled sections.

With public support for the Biden immigration agenda crashing, FAIR is rallying pushback on numerous fronts.