Since taking office in January, the Biden administration has attempted to gut countless border and immigration enforcement policies, and negate numerous legal statutes by refusing to enforce laws under the rubric of exercising prosecutorial discretion. Two important judicial rulings handed down in August have turned the tables somewhat on the Biden administration and the mass immigration lobby.

In the first ruling, federal Judge Matthew Kacsmaryk ordered the Biden administration to reinstate the MPP program, which requires people seeking to enter a political asylum plea to remain in Mexico until a hearing on their request can take place. The MPP was a bilateral agreement with Mexico, negotiated by the Trump administration in response to a surge of economic migrants attempting to enter frivolous pleas for political asylum in the expectation that doing so would result in them being released into the United States. The MPP provided a highly effective deterrent to asylum fraud, and the surge of migrants declined dramatically once it was in place.

Terminating the MPP was one of the first acts of the Biden administration and, not surprisingly, triggered the massive and sustained wave of illegal immigration that has created a crisis at the border. Ironically, President Biden’s hasty attempt to scrap the MPP ran afoul of requirements of the Administrative Procedures Act (APA) – the same statute that tripped up former President Trump’s attempt to repeal the Obama administration’s unconstitutional Deferred Action for Childhood Arrivals (DACA) program. 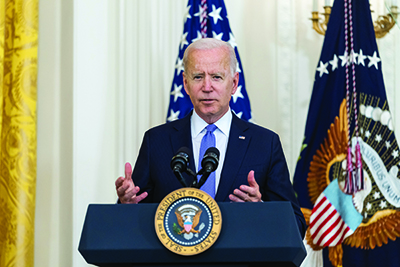 The challenge to the cancelation of the MPP was brought by the states of Texas and Missouri. In his ruling, Judge Kacsmaryk agreed that, in addition to President Biden’s failure to abide by the APA, the plaintiffs demonstrated that the repeal of the MPP “has contributed to the current border surge.” The Biden administration immediately appealed Judge Kacsmaryk and was rebuffed by the Fifth Circuit Court of Appeals.

While the judicial ruling was an important victory for common sense and the effort to restore some semblance of order at the border, there is every reason to believe that the Biden administration will drag its heels in re-implementing it. In a less than encouraging response to losing in court, the Department of Homeland Security tweeted that it “has begun to engage with the Government of Mexico in diplomatic discussions surrounding the Migrant Protection Protocols.” Expect that those diplomatic discussions will move very slowly without judicial oversight to ensure that the court’s order is carried out.

According to recent government data, ICE, the agency charged with locating and removing illegal aliens in the interior of the country, has been stalled by Biden policies to a point where a typical ICE agent affects one deportation every two and half months. Again, given the Biden administration’s ideologically driven anti-enforcement stance, judicial and congressional oversight will be necessary to ensure that it complies with the both the letter and the spirit of the ruling.