Senators Tom Cotton (R-AR) and David Perdue (R-GA) introduced S. 1103, the Reforming American Immigration for a Strong Economy (RAISE) Act, which would replace our current outdated, dysfunctional, and unfair immigration system with one that serves the national interest. The RAISE Act recognizes every day Americans as the primary stakeholder to the U.S. Immigration system by reducing overall levels of immigration and admitting immigrants who have the education and skills to succeed in 21st Century America.

Specifically, the bill ends chain migration by limiting family-based green card eligibility to the spouses and minor children of U.S. citizens and legal permanent residents. This reform alone drastically reduces the flow of legal immigration into the United States from 1.1 million new legal permanent residents to 540,000 per year within a decade. Similar to the Bipartisan Jordan Commission’s recommendations, the RAISE Act also ends the visa lottery and caps annual refugee admissions to 50,000 – consistent with a 15-year average.

Additionally, the bill allows for a total of 140,000 merit-based green cards to be allotted each year (consistent with current employment-based green card cap) to those who demonstrate merit using a point-based system. To demonstrate merit, the bill weighs factors that would best enable an immigrant to succeed and contribute to the U.S. economy, including highest degree obtained, English proficiency, and age.

What Does the RAISE Act Do?

How does the RAISE Act Make Immigration Great Again?

Section 5 of the bill replaces the current employment-based immigration system with a merit-based points system, akin to those used by Canada and Australia. The points categories are based on predictors of success and economic contribution. Up to 140,000 visas will be issued annually to the highest scoring applicants. 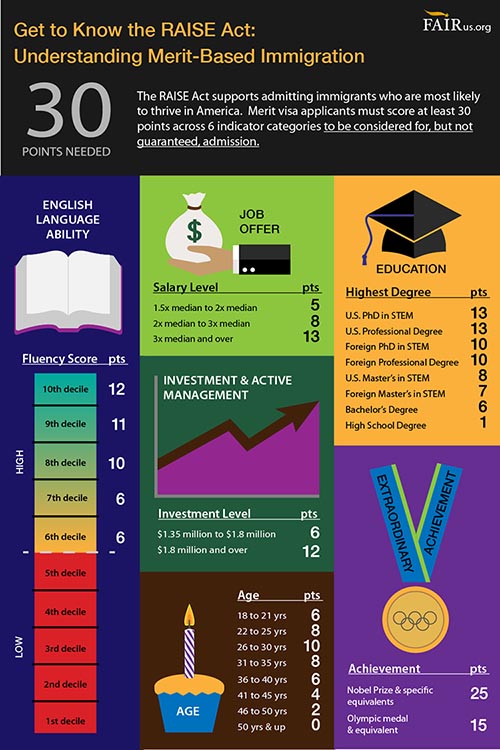 Section 4 of the bill overhauls the family-based legal immigration system by ending the current practice of distributing most green cards (Legal Permanent Resident (LPR) status) based on a family relationship rather than on the basis of skills and ability to contribute to American society (known as chain migration). Specifically, the bill limits family-based green card eligibility to the spouses and minor children (under 21) of U.S. citizens and LPRs.

Section 2 of the bill repeals the visa lottery under INA Section 203(c)/Section 201(e). Under the visa lottery, the U.S. arbitrarily hands out 50,000 green cards a year without regard to the individuals’ ability to contribute or succeed in America.

Section 3 amends INA Section 207 to establish an annual cap of 50,000 refugee admissions. In doing so the bill revokes the president’s unilateral authority to annually admit as many refugees as he determines. This section also revokes the “emergency designation” power of the president that allowed him to exceed the refugee cap for “emergency refugee situations.”

Why the RAISE Act Is Necessary

Currently, the U.S. admits over 1 million immigrants per year but only 1 out of 15 new immigrants are admitted based on skills while 2/3 are admitted simply because of a family relationship. This policy of chain migration has resulted in a generation-long influx of low-skilled and low-educated immigrants. The RAISE Act ends this senseless practice of chain migration and replaces our current employment-based system with a merit-based point structure.

It does so by limiting family-sponsored green cards to the nuclear family (spouses and minor children) and eliminating the fraud-ridden visa lottery that randomly doles out 50,000 green cards a year. The bill also establishes a point-based system that would help select immigrants who have the most to offer this nation and have the skill set needed to achieve once they arrive. According to Princeton and Harvard professors, these changes will cut legal immigration to approximately 638,000 in the first year and to just under 540,000 in ten years.