Many Americans know very little, if anything, about “remittances,” (also known as “remittance payments”) and how they affect the U.S. economy. The term “remittance” refers to money earned in the United States that is transferred to relatives, friends or business associates who are still abroad. Remittance payments may be made by U.S. citizens, lawfully-present aliens or illegal aliens. 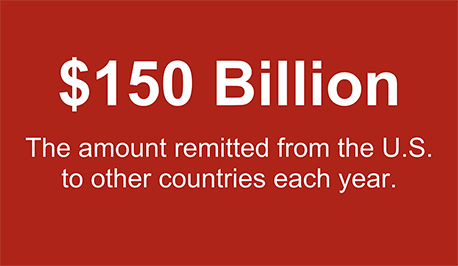 A 2015 analysis of Census Bureau data by the Pew Research Center concluded that there are roughly 45 million foreign-born individuals currently living in the United States.[1] Those foreign-born individuals typically have a large network of family, friends and colleagues who remain abroad. When those associates are residing in a country with an economy that is less robust than the United States, there is often a strong impetus to send money overseas to support them.

The net result is that ­workers are sending roughly $150 billion out of the U.S. economy each year.[2] That money is not spent on goods or services in the United States. As a result, it is not subjected to sales taxes, excise taxes, restaurant taxes, etc. In addition, neither the vast majority of states nor the federal government impose a tax on overseas money transfers. The loss of tax revenue – that could be used to pay for a large number of public services consumed by aliens in the United States – is staggering.

According to a Gallup poll in 2011, 10 percent or more of households in 35 countries rely on income from family members or friends who reside in another country.[3] This study will examine why so many foreign households rely on income earned in the United States, and how much the American economy suffers as a result.

WHY DO SO MANY IMMIGRANTS FROM DEVELOPING COUNTRIES SEND MONEY HOME?

Immigrants in the U.S. who send remitted funds to family, friends or business associates in developing countries are playing the foreign exchange market.

American dollars are generally worth significantly more than the local currency in developing countries.[4] For example, according to 2017 data, the average hourly wage in India is about 61.9 Rupees, or roughly $0.90.[5]

That means that a U.S.-based relative can provide an Indian citizen with one month’s wages by remitting roughly $150 per month. A slightly larger remittance of $250-$500 per month can support an extended Indian family in a comparatively luxurious style.

WHY SHOULD YOU BE CONCERNED ABOUT REMITTANCES?

The answer is simple: Remittance payments are just one more way that unchecked mass migration hits average Americans in the wallet.

The remittance funnel that channels billions of dollars out of our economy every year is directly tied to our overly generous immigration policies and our lax enforcement of America’s borders. The majority of remittance payments are made by immigrants – illegal aliens, lawful permanent residents or naturalized citizens.

How do Remittances Impact an Economy?

When an individual sends money earned in the United States to friends, relatives or business associates still living abroad, that money is taken out of the U.S. economy and injected into a foreign economy.

IMPACT TO THE U.S. ECONOMY

Rather than being used to purchase goods and services in the United States, the majority of remittance monies go directly into the pockets of foreign businesses. A smaller portion of remittance payments indirectly wind up in the coffers of foreign governments through duties imposed upon the cash transfer itself or taxes on the goods and services purchased with that cash.

The money sent abroad is typically disposable income (that would often be spent on small luxuries). These small luxuries are subject to sales taxes, restaurant taxes, excise taxes, resort taxes, etc., known as “consumption taxes” (taxes levied on money spent, rather than upon money earned). Most state and local governments rely on consumption taxes to provide the revenue necessary to maintain roads and fund important services such as fire and police protection. When immigrants remit portions of their income to other countries, it places more pressure on the local jurisdictions in the states where they reside to make up that lost revenue elsewhere. This often results in higher overall taxation rates.

Furthermore, local businesses suffer because those who send remittance payments abroad typically end up with less disposable income. Money sent to other countries means less money to spend on goods and services in the communities where foreign-born individuals live.

According to 2017 data gathered by the Census Bureau, the median annual income for a household headed by someone born in the United States is roughly $61,987.[6] On the other hand, households headed by someone born outside the United States earn approximately $57,273.[7] That may seem like a small difference. However, according to the Center for Immigration Studies, 63 percent of non-citizen households access welfare programs, compared to 35 percent of native households do.[8] That means immigrants are more likely to consume public services, but due to lower incomes, pay a smaller share of the costs for those services.

That problem is compounded by the fact that many immigrants send a significant percentage of their lower salaries abroad. According to the Center for Latin American Monetary Studies, Central American and South American immigrants send anywhere from 17 percent to 30 percent of their lower salaries abroad.[9] That income is removed from the U.S. economy. Therefore, it no longer generates any tax revenue that can be used to pay for public services.

Many nations rely heavily on remittances. In fact, remittances make up 10 percent or more of the total GDP in approximately 35 countries.[10] A few nations, such as Haiti, rely on foreign money to the point that remittances constitute more than 30 percent of their GDP.[11] The nations that are heavily dependent on remittances are almost exclusively developing countries with lagging economies.

Many immigrants and academics trumpet the allegedly salutary effects that remittances have on poor countries. Common claims about remittances include:

But those claims fail to consider the profoundly negative results on developing economies:

Furthermore, countries with higher rates of remittances received tend to suffer from the “brain-drain” effect. A brain-drain occurs when those immigrants who have used remittance payments to obtain further education, or upgrade job skills, migrate out of developing economies in search of a higher standard of living, including improved pay, political stability and/or access to better technology.[12]

Accordingly, skilled migrants who make it to the United States frequently find themselves in a position to remit a portion of their income to their extended home country network. But, in so doing, they tend to feed a vicious cycle of dependency in their native lands.

How Much Cash is Remitted Outside of the United States?

Every year, foreign-born individuals living in the U.S. remit just under $150 billion from the United States to other countries.[13] That amounts to more than 24 percent of the total amount remitted from host countries worldwide. Mexico is the primary beneficiary of U.S. remittance transfers, receiving just over $30 billion from the U.S. economy in 2017. In comparison, Americans residing abroad only sent home around $6.6 billion in 2017, meaning the U.S. economy lost a net of $144.5 billion.[14] 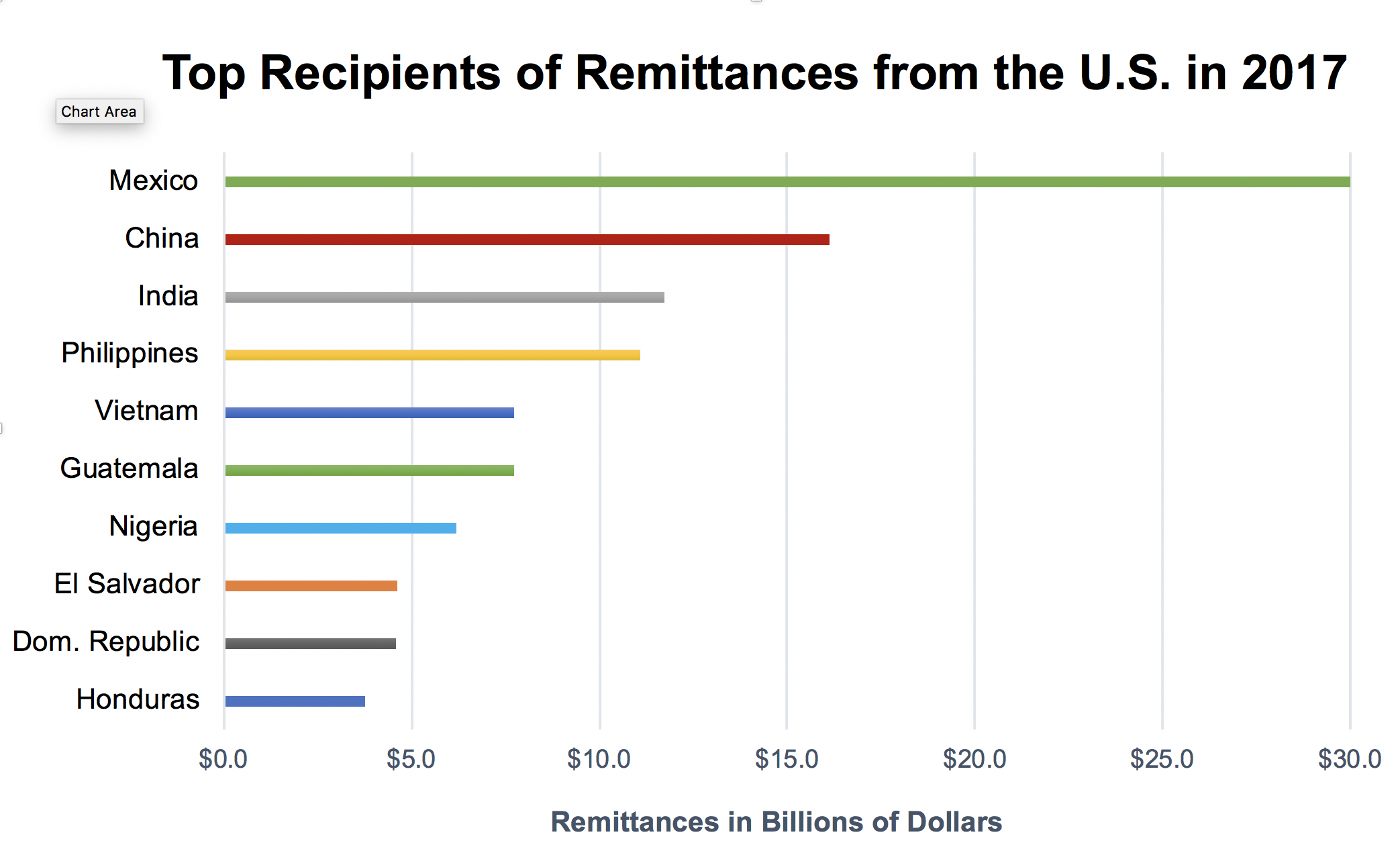 What Can Be Done to Reduce the Negative Effects of Remittances on the U.S. Economy?

So how do we make sure that more of the cash generated by our economy stays within our economy? The most effective solution would be to impose some form of tax on any funds earned in the United States and transferred abroad.

Generally speaking, FAIR believes that the U.S. economy is best served by free-market policies that enable our workforce to keep as much of its earnings as possible. As such, we are hesitant to recommend additional taxes. However, it is both unfair and unreasonable to expect working Americans to pay for the operations and upkeep of their communities while their immigrant neighbors divert capital to support communities in foreign countries.

Remittance taxes are a common policy in many nations. Take India, for example. While India receives nearly $12 billion every year in remittances from the U.S., a migrant living in India must pay a 12.36 percent “service tax” on the fees charged by banks or financial agents for transferring money both in and out of the country.[15]

A remittance tax would serve a dual purpose:

Currently, only one state taxes remittances: Oklahoma. In both Fiscal Years 2016 and 2017, the Sooner State brought in $13 million by taxing international wire transfers at one percent.[18] For comparison’s sake, the entirety of the state’s alternative public schooling program cost $9.5 million in Fiscal Year 2017. The state could also quadruple the size of its school lunch program, which costs approximately $3.5 million, with that income.[19] The school lunch program assists low-income students living in the state, many of whom are immigrants or the children of immigrants. So far, there is little to show that Oklahoma’s remittance tax has harmed the state’s economy in any way.

If all 50 states had a remittance tax in 2017, they would have kept up to $1.5 billion circulating through the U.S. economy. That money, in turn, could have been invested in schools, roads, infrastructure upgrades and other public maintenance projects in states with large migrant populations.

Another appropriate measure would be to prohibit the transfer of money abroad by anyone who is an illegal alien and to require foreign nationals making international wire transfers to prove they have authorization to live and work in the United States:

It is bad enough that American taxpayers are being asked to provide welfare for foreign nationals in the United States. It only adds insult to injury when our state, local and federal governments allow income that could be taxed to reduce some of the costs associated with unchecked mass migration (both legal and illegal) to simply flow out of the U.S. economy and into foreign pockets.

Although remittances are one of the least discussed aspects of U.S. immigration policy, they create some of the most serious negative effects associated with unchecked mass migration. They siphon off a large chunk of the capital that drives U.S. businesses and that generates tax revenue for state/local governments. And there is no evidence that this money eventually makes its way back to the U.S. economy, either directly or indirectly.

Therefore, remittance payments act as a huge, hidden tax on Americans. It is time that the U.S. government took steps to protect our economy by imposing a tax on international wire transfers and by prohibiting illegal aliens from sending earnings abroad. For too long, working Americans have been expected to pick up the tab for flawed immigration policies that put the interests of foreign nationals and foreign countries ahead of those of U.S. citizens.