As the United States continues to climb out of the COVID-19 pandemic, the nation’s recovery has been economically challenged on various fronts. While the availability of jobs and labor force participation have gradually improved over the past two years, the economy remains below pre-pandemic levels according to most metrics. Meanwhile, government spending and inflation have increased significantly, causing some form of economic hardship for virtually all Americans.

The mass-immigration lobby is working overtime to exploit these hardships to advance their agenda. The proposed solutions to their perceived problems are always the same – higher immigration levels and lower wages for American citizens.

A couple of these dubious claims and harmful solutions include:

Our research found that both of these narratives are either outright false or based on misleading information. In the sections that follow, we will address these myths in greater detail.

The open borders coalition, including the U.S. Chamber of Commerce, continues to suggest that there is a critical worker shortage that can only be fixed by drastically increasing the importation of foreign labor1. Various mainstream media outlets parrot this fallacy as well2. While some claim that there are various reasons for the so-called worker shortage, virtually all assert that COVID-related immigration reductions in 2020 are the primary driver. However, are these claims accurate?

Is immigration really slowing down?

The overall immigrant population in the United States grew significantly between 2010 and 20203. However, during the COVID-19 pandemic, the federal government severely limited migration into the country to minimize the spread of the virus. Furthermore, due to the economic shutdowns implemented by nearly every state, the number of available jobs to both migrants and native-born Americans dropped drastically. As a result, the immigrant population in the United States decreased by a sizable amount (roughly 600,000 individuals) between March and September of 2020.

However, beginning in September of 2020, the migrant population began to grow again as COVID restrictions eased, and once Joe Biden took office monthly immigration levels reached unprecedented territory. This was caused by drastic cuts in perimeter and interior enforcement, and because the Biden administration rolled back virtually all limits and reforms placed on legal immigration by the Trump administration. Between September 2020 and March 2022, FAIR estimates (based on Census Bureau data) that the total immigrant population in the United States has grown by more than 2.5 million individuals, totaling approximately 49 million. 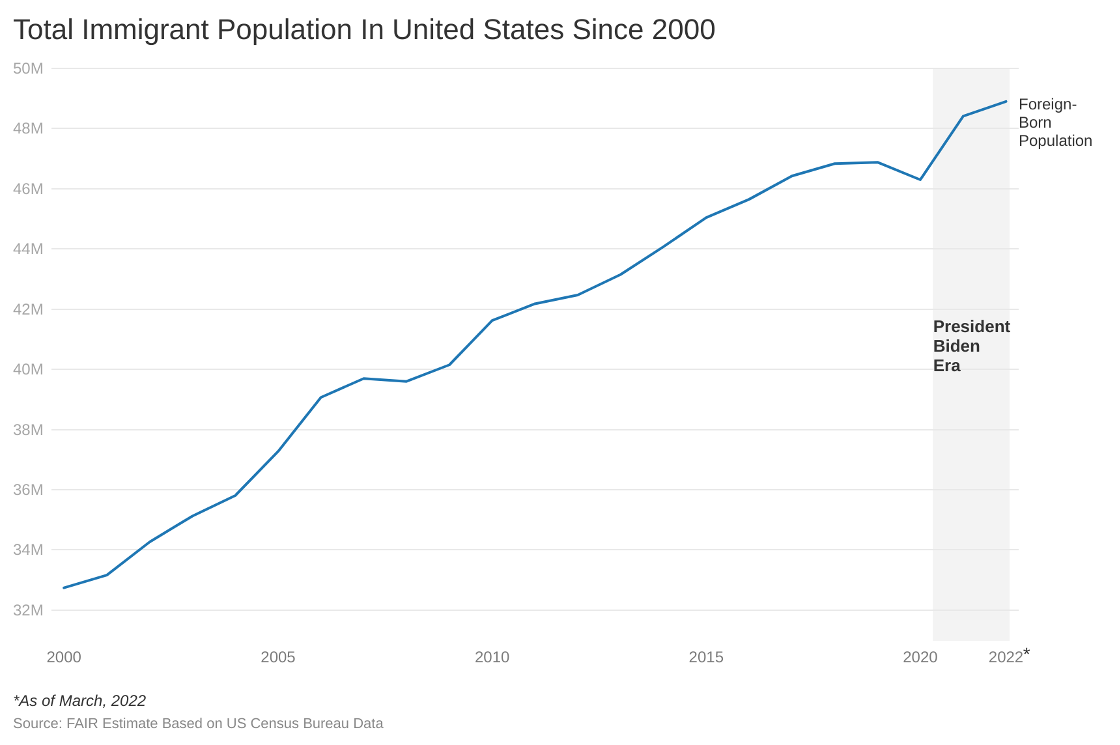 So while there was a temporary decrease in immigration during the early months of the pandemic, those levels have increased dramatically since then. Most of the aforementioned analysis citing the reduction of immigration during the pandemic as the culprit for a labor shortage fails to account for the drastic increase in immigration that has occurred over the past 18 months. They instead focus solely on the temporary decrease that occurred during the early months of the COVID-19 pandemic. In reality, the immigrant population in the United States has grown so rapidly since President Biden took office that it is now higher than it would have been had the pre-COVID trajectory continued unimpeded.

The bottom line is that those advocating for more immigration as a means to fuel economic recovery have failed to disclose that immigration is already growing at unprecedented rates. So, while it is indeed true that the total rate of available jobs increased significantly as the country began rescinding economic shutdowns,4 this high number of available jobs cannot be primarily attributed to a short period of reduced immigration.

But what about the claim there are more jobs than workers in the United States?

In the early spring of 2020, tens of millions of Americans lost their jobs or left the labor force due to the economic and health impacts of COVID-19. After several months of severe economic “shutdowns” in nearly every state, the country slowly re-opened, and jobs once again became available. By June of 2021, the number of monthly job openings in the United States surpassed 10 million. The following month that total grew to over 11 million and has stabilized around that number ever since.5

In the very short run, job growth has indeed outpaced Americans’ willingness to rejoin the labor force. However, while labor participation is still significantly below what it was before the pandemic, that disparity is quickly changing – labor force participation is rising rapidly as Americans are returning to work. Thus, labor shortages are largely exaggerated.

As of March 2022, the labor force participation rate was still around a full percentage point lower than it was in February 2020. This mean that roughly 2,370,000 people who left the jobs market due to the COVID-19 pandemic still haven’t rejoined the economy. While a small number of these individuals may never return, it’s logical to assume that most will, and the data support this assessment. In addition, as generous pandemic-related welfare programs expired throughout 2021 at the federal and state levels, many of the individuals participating in these programs re-entered the labor force. It’s safe to assume that this trend will resume as these programs continue to expire.

Furthermore, the pre-COVID trend of the labor force participation rate suggests that it would likely have reached at least 63.7 percent in March 2022 had pandemic disruptions not occurred. This means it’s likely that 3,330,000 people have still not rejoined the labor force. 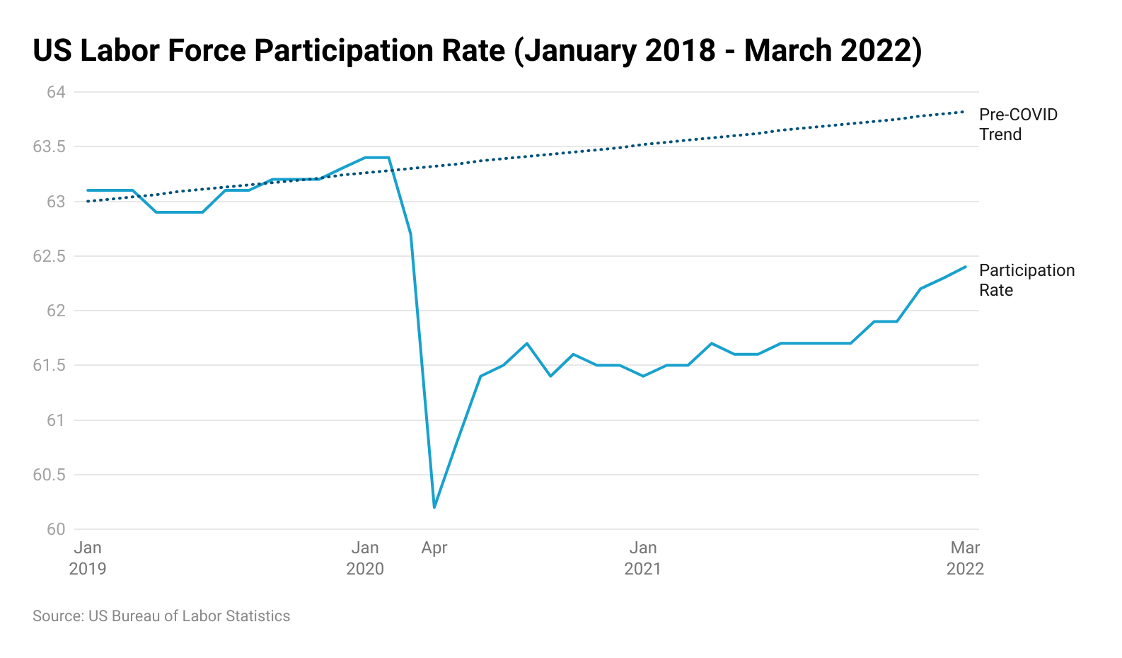 In addition to millions of Americans returning to their jobs, there are millions more available workers who remain technically unemployed or underemployed. (“Labor participation rates” are not the same thing as “unemployment or underemployment rates.”) The U-6 unemployment rate (6.9 percent as of March 2022) also remains higher than it was prior to the pandemic. When this cohort is combined with the number of those who still have not rejoined the labor force, approximately 14.73 million workers in the United States are currently unemployed or underemployed.

There are approximately 11.5 million job openings in the United States right now,6 and 14.73 million employable Americans. This means that there are 3.23 million more workers in the country than open jobs.

Therefore, the prevailing narrative that there is a labor shortage in the United States is a myth. Increasing immigration to levels even higher than they currently are would mean to flood the country with far more workers than there are jobs, and the millions of Americans who continue to rejoin the workforce every day would likely be left without employment opportunities in the coming months and years.

The Myth That Mass Immigration Will Lower Inflation

Because migrants are typically willing to accept lower earnings, another claim that is gaining traction is the idea that increasing immigration, or even granting a mass amnesty, will reduce inflation. With inflation reaching crisis levels under the Biden administration, mass-immigration advocates have seized the opportunity to push this narrative – hoping that they can capitalize on the rightful concerns most Americans have regarding the rising cost of goods and services.7

However, such talking points on inflation are misleading.8 Immigrants – both legal and illegal – tend to work lower-paying, lower-skilled jobs, which means that downward wage shifts in those sectors will not heavily impact prices.

An analysis by The Center for Immigration Studies demonstrates that increasing immigration to depress working-class wages would have a minimal deflationary impact while the financial pain inflicted on these most vulnerable Americans would be significant.9 According to the study, “[r]eflecting their relatively modest average compensation, workers without a bachelor’s degree account for an estimated 25 percent of GDP. This means that even a substantial reduction of 10 percent in their wages could likely reduce consumer prices by only an estimated 2.5 percent [emphasis added].” In short, this means that the average worker without a college degree would have roughly $4,000 less per year, but the costs of goods would – at best – remain relatively stagnant.

Historical trends back these findings. A correlation analysis of annual immigration into the United States and yearly inflation yields only a 0.41 coefficient. This is a statistically insignificant relationship, which indicates that, in recent history, no direct correlation could be demonstrated between increased immigration and decreased inflation.10 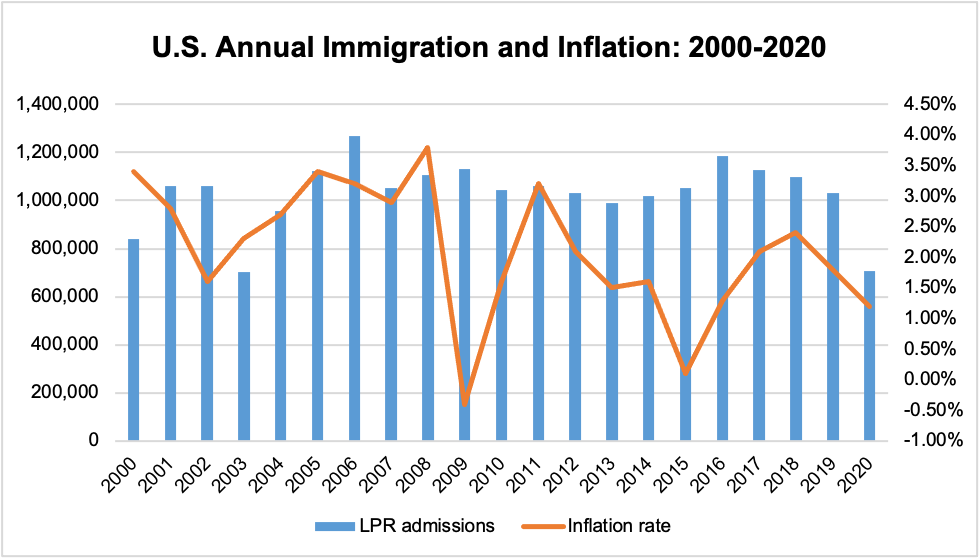 Instead, as many experts have pointed out, it’s more likely that COVID-19-related government spending is the primary culprit of growing inflation, and increased immigration won’t stop that.11 The West alone has pumped around $12 trillion into the financial system to fight the economic fallout of the coronavirus pandemic. 12 Indeed, since February 2020 the U.S. money supply has increased by 40 percent.13  As the law of supply and demand dictates, increasing the amount of currency in circulation means that people have more money to spend, which in turn causes the price of goods and services to increase until a new equilibrium is reached.

The evidence suggests that more immigration will not lead to a meaningful decrease in inflation rates or alleviate its impact on the American public. What it would do instead is decrease wages so that native-born Americans and immigrants alike have less money to combat the still-increasing cost of goods and services. This is akin to throwing gasoline on a fire with potentially catastrophic effects for average Americans, especially those who are most vulnerable to the effects of inflation. The federal government must not hijack this issue by using false premises to depress the wages of American workers (or worse, replace them entirely) in order to line the pockets of corporations.

The founders of this country intended for immigration to strengthen the fabric of our republic by placing a heavy emphasis on merit, the needs of the United States, and the ability of migrants to assimilate into our values and culture. Indeed, Thomas Jefferson wrote numerous letters highlighting the fundamental importance of an immigration system based on these pillars.14 George Washington shared similar views in a 1794 letter to John Adams, suggesting that the federal government should not actively encourage mass-immigration, and should instead focus on an immigration system that targets the needs and interests of the United States.15

The mass immigration lobby has completely abandoned these principles and has shown that they will do anything to advance their agenda, notably selling out American workers during periods of economic instability by falsely suggesting that unlimited immigration will solve all of America’s economic challenges.

c   Grace Dean, “The CEO of the US Chamber of Commerce Says Immigration Would Help Curb Both Inflation and the Labor Shortage,” Business Insider, January 12, 2022, https://www.businessinsider.com/immigration-inflation-labor-shortage-chamber-commerce-suzanne-clark-jobs-work-2022-1#:~:text=Increasing%20immigration%20would%20help%20lower,she%20said%2C%20per%20the%20broadcaster.

3 FAIR’s estimate of the total immigrant population is based on data derived from the Census Bureau’s American Community Survey (ACS) and Current Population Survey (CPS). We make necessary adjustments to include those illegal immigrants not covered by Census surveys. ACS and CPS data is publicly available on the Census Bureau’s website: https://www.census.gov/programs-surveys/cps.html, https://www.census.gov/programs-surveys/acs

10 Offsetting these variables by one year did not lead to a significantly different correlation coefficient.