Congress created E-Verify in 1996, and launched the program in 1997, to assist employers in verifying new employees’ eligibility to work in the United States. The stated goal is to provide fast and reliable verification by comparing an employee’s I-9 form to U.S. Department of Homeland Security and Social Security Administration databases.(1)

Though easy to use and accessible to all employers, participation in the E-Verify program is not required by federal law. However, the 2011 Supreme Court case Chamber of Commerce v Whiting affirmed that states may constitutionally pass legislation requiring some or all employers within their jurisdiction to use E-Verify. Unfortunately, most states have left its use optional, or only require certain employers to use the program.(2)

The E-Verify program protects job opportunities for American workers by ensuring that employers using the program only hire individuals who are authorized by the federal government to work in the United States. Opponents of E-Verify often claim, however, that the program’s 99.7 percent verification accuracy rate isn’t reliable enough and assert that any false-positive returns will remain uncorrected, even when appealed.(3) Some opponents go as far as to argue that requiring widespread usage of the program will result in increased unemployment rates.

To determine whether state E-Verify laws impact job markets after their implementation, this report examines the U-6 unemployment rate(4) in states one year after instituting or expanding E-Verify requirements. The U-6 unemployment rate includes discouraged job-seekers who have stopped searching for employment and those who are working part-time for purely economic reasons – as opposed to those who may be working part-time by choice.

Accordingly, U-6 data provides a better representation of those who are genuinely unemployed than the number that is commonly reported by the mainstream media. The most frequently reported number—the U-3 unemployment rate—only includes those who are completely out of work and still actively searching for employment.

To investigate this issue, FAIR analyzed the unemployment rates of states that implemented or expanded E-Verify laws after the onset of the Great Recession in 2008. All 50 states were negatively impacted by the financial collapse and faced a steep recovery that many economists believe is still ongoing. Comparing employment trends in individual states against the national average provides a better picture of how E-Verify measures may have helped or hurt the job market during this extended recovery period.

The following is a list of states, by year, since 2009 that created new E-Verify laws or expanded existing laws, and summaries of how those laws appear to have impacted unemployment rates in each state. 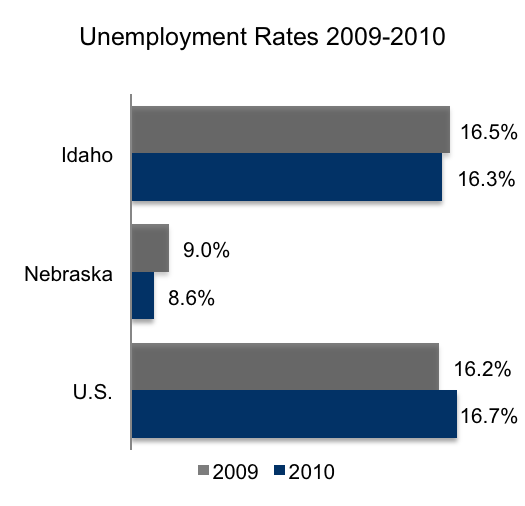 Nebraska—The Nebraska Legislature requires E-Verify for all public employers and contractors. After implementing E-Verify, Idaho and Nebraska saw their unemployment rates drop while the national average rose by half a percent. (5) This demonstrates that even statutes requiring limited use of E-Verify may play a role in increasing job opportunities for those authorized to work in the United States. At the very least, E-Verify did not prevent these states from significantly outperforming the nation in job growth. 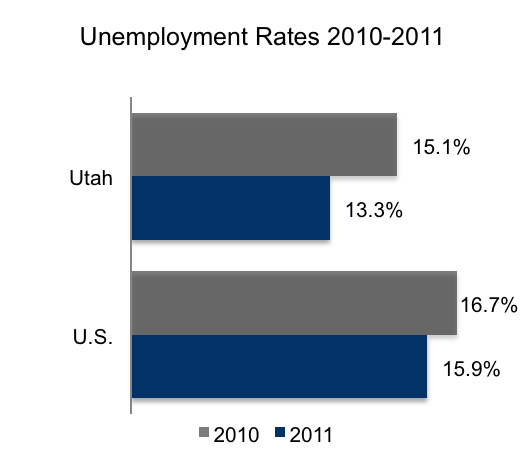 Utah—The State Legislature expands the state E-Verify law to require all private employers with more than 15 employees to use the program to verify the work authorization status of new employees. Previously, the state only required public employers, including public contractors and subcontractors, to use E-Verify, the Social Security Number Verification Service, or a similar employment eligibility verification program.

The unemployment rate in Utah recently climbed as high as 9 percent. However, joblessness declined the year after the state implemented mandatory use of E-Verify. This was the state’s first drop in unemployment since the onset of the Great Recession. 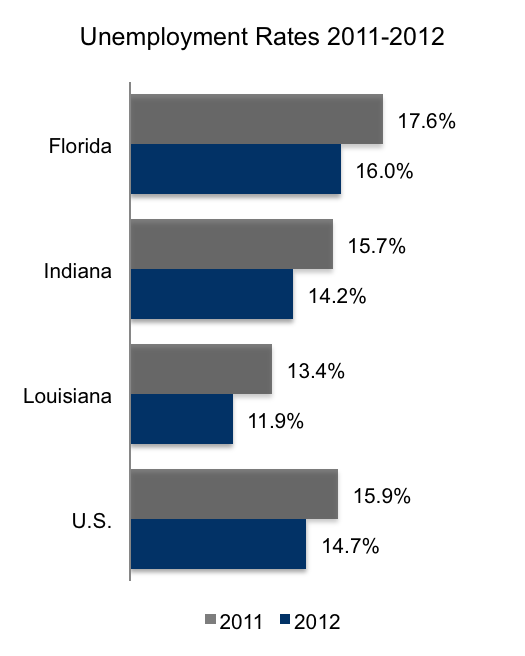 Florida—Governor Rick Scott issues an executive order requiring all agencies under the direction of the governor to use E-Verify for new employees, contractors, and subcontractors.

Indiana—The Indiana General Assembly requires public employers and contractors with state and local governments to use E-Verify and offers tax incentives to private employers who use E-Verify. This law was implemented in July of 2011.

In 2011, all three states that passed new E-Verify laws, or expanded existing requirements, saw unemployment rates decrease at a greater rate than the national average during the same time period.

Alabama—A 2011 law requiring all public and private employers in the state to use E-Verify takes effect. Additionally, the Alabama Legislature passes a law to increases penalties for public contractors who fail to use the program, and expands the definition of subcontractor to include more employers under the state’s E-Verify requirements.

North Carolina—Previously, the North Carolina General Assembly required all state employers, public contractors and subcontractors to use E-Verify. In 2011, the General Assembly passed a law to expand E-Verify requirements to all private employers with at least 25 employees. The first phase of implementation of the 2011 law required all businesses in the state with 500 or more employees to use the program by October 2012. By July 2013, all businesses with 25 or more employees were required to use the program. The law excluded seasonal workers employed for terms less than 90 days from the verification requirement.

Pennsylvania—The State General Assembly requires all public works contractors and subcontractors with contracts worth at least $25,000 to use E-Verify when hiring new employees.

South Carolina—A 2011 law requiring all employers, including public employers, contractors, subcontractors and private employers, to use E-Verify takes effect. Under the law’s requirements, employers must use the program in order to maintain their business license. Previously, loopholes in the law allowed employers to avoid using E-Verify if a new employee had a valid driver’s license and provided certain other documentation.

Tennessee—A 2011 law requiring all public and private employers with six or more employees, including contractors and subcontractors, to use E-Verify takes effect. The law includes alternative procedures for small employers.

West Virginia— The West Virginia Legislature requires any employer that has employees working on the grounds or in buildings of the Capitol Complex, or who have access to sensitive or critical information, to use E-Verify.

Every state that implemented or expanded E-Verify in 2012, except Tennessee, experienced reductions in unemployment throughout 2012 and 2013. All but three states beat the national average drop in unemployment. And although Tennessee saw its unemployment rate temporarily increase, the state was already beating the national average by 1.4 percent in 2012. This was likely only a temporary market correction since the state’s jobless rate eclipsed that anomaly by dropping 1.6 percent in 2014—an overall improvement of 2.4 percent between 2011 and 2014.

Since 2013, only a few states have enacted or amended E-Verify legislation. In December of 2013, the Virginia General Assembly modestly expanded its state’s E-Verify laws by requiring public contractors who hold a contract worth at least $50,000 and employ 50 or more workers to participate in the program. The state saw its unemployment rate drop a respectable 1.1 percent in the year following implementation.

The North Carolina General Assembly also tightened the state’s E-Verify laws in 2015 by requiring public contractors to use E-Verify. Unemployment data available since the law was implemented is not sufficient to produce an accurate before and after comparison.(6)

In 2016, the Tennessee General Assembly passed HB 1830, which removes loopholes in the state’s existing E-Verify law that allowed employers to avoid using E-Verify and requires all employers with 50 or more employees to use the program. There is insufficient data available to make judgment on the impact of these changes on the state’s unemployment rates. Conclusion

Many opponents of E-Verify portray the system as a barrier to employment opportunities. To the contrary, this study finds that states requiring the use of E-Verify are leading recovery efforts following the worst global recession since World War II.

Millions of American citizens would find gainful employment if they did not have to compete against unauthorized workers who undercut local wage rates. E-Verify plays a critical role in alleviating unfair competition against unauthorized workers; and states utilizing the program are experiencing positive job growth that outpaces national averages in the majority of cases. Therefore, FAIR recommends that all states and the federal government make E-Verify usage mandatory for all public and private employers in order to protect and empower the American worker.

1 USCIS, “What Is E-Verify”, https://www.uscis.gov/e-verify/about-program/history-and-milestones

4 Bureau of Labor Statistics, “Alternative Measures of Labor Underutilization for States, Third Quarter of 2015 through Second Quarter of 2016 Averages,”http://www.bls.gov/lau/stalt.htm