At first glance, President Trump’s FY 2021 budget request appears to be a retreat from his efforts to secure adequate funding for additional construction of a wall along stretches of the southern border. The budget proposal seeks a mere $2 billion, significantly less than the $5 billion the White House sought last year. 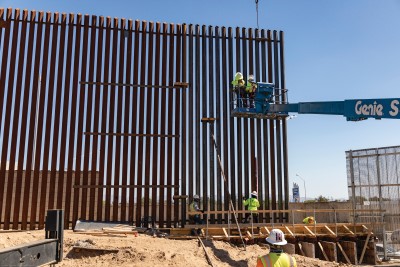 But what is not immediately evident is that the reduced funding request for the border wall – a signature promise of President Trump’s 2016 campaign and almost certain to be a feature of his reelection bid – does not mean that the administration is walking away from its commitment to border security. Rather, the 2021 funding request reflects two realities: first that government funding measures originate in the House of Representatives, where Speaker Nancy Pelosi left no doubt about her disdain for the president and his agenda by tearing up a copy of his State of the Union Address before a national audience. And second, that the administration has successfully maneuvered around the political gridlock in Congress and secured significant additional funding for wall construction by other means.

The administration has managed to amass $18 billion for the project by tapping other Homeland Security and Defense Department monies that were available to protect the southern border. The use of these funds has been upheld by several court rulings. The $18 billion represents nearly three-fourths of the estimated $25 billion cost of completing the entire amount of wall construction the president promised.

In the section of the budget request titled, “Ensures Security to Promote Prosperity,” the White House says that “by the end of 2020, the Administration expects approximately 400 miles of new border wall to be completed on the southern border; an additional 600 miles of new border wall will be completed in the coming years with funding made available from 2017 to 2020. In the meantime, the Administration has released a plan for updating immigration and asylum laws to encourage legal migration, promote application based on merit, and support refugees in need of protection from persecution.”

The ability to secure additional funding for border security and administration efforts to discourage asylum abuse have already borne fruit. Since peaking at 144,000 last May, border apprehensions have declined steadily each month, as fewer migrants attempt to exploit our asylum policies. In January, just 29,200 apprehensions were reported.

FAIR has strongly backed construction of a secure border wall, along with reforms to our asylum and detention policies, and interior policies such as abolishing sanctuary policies and mandating use of E-Verify by all employers. All of these components are essential to ending mass illegal immigration. In several recent fact-finding missions to the border, FAIR has been able to report through talk radio and social media the effectiveness of the border wall in preventing illegal entry in the areas where it is in place.