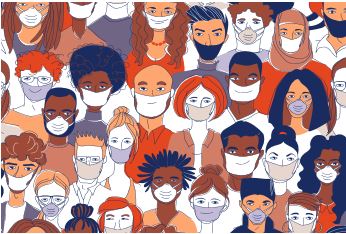 We’re still in the midst of the global COVID-19  pandemic, trying to figure out how to keep people healthy and the economy afloat. But we will not be out of the woods once the curve has flattened (a vague objective in itself), cautions the International Monetary Fund (IMF). The ongoing effects of the pandemic could lead to global social unrest, warns the

IMF’s semi-annual Fiscal Monitor report, which was released in mid-April.

The economic crises around the world that will linger on after the health crisis abates could spark social upheavals in countries that were already teetering on the edge. These outbreaks, which are likely to be violent, are “more likely in countries with histories of widespread corruption, lack of transparency in public policy, and poor service delivery,” states the report The IMF’s language describes precisely the sort of countries that have been producing large surges of migrants in recent years. The pandemic after the pandemic could likely include exponentially greater numbers of people seeking to migrate.

Having been unprepared for the COVID-19 crisis, the United States and other developed nations cannot afford to be caught flat-footed by the pandemic’s aftershocks. With our own economy reeling and government deficits reaching unprecedented levels, the United States will be in no position to accommodate new and larger surges of migrants.

While the United States cannot ignore the suffering of people in countries pushed to the brink by a global economic crisis, FAIR is urging the administration and Congress to both secure our borders, while preparing to assist people in their home countries. Completion of a secure border fence, which has been necessary for a long time will become critical if the IMF’s predictions are even partially accurate. Other measures, such as mandatory use of E-Verify to secure American jobs in the face of rising unemployment and closing loopholes in asylum laws will similarly be essential.

For more than half a century, the United States has had no definable national interest objective for its immigration policy. In the aftermath of the COVID-19 crisis, that is a luxury we will no longer be able to afford.