Given where we were in terms of surging illegal immigration at the end of FY 2019, FY 2020 saw a dramatic decrease in people entering the country illegally. For the fiscal year, which ended on September 30, the number of people apprehended along the southern border was 458,088, just about half of the 977,509 people who were caught at the border during the previous year. 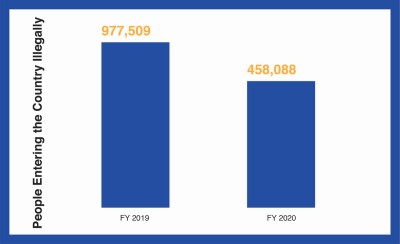 The improvements were due to a number of policy moves and, of course, circumstances. After the unprecedented surge of illegal immigration during the spring and summer of 2019, the Trump administration took decisive steps to discourage illegal migrants and halt the abuse of our asylum policies.

The administration struck agreements with Central American governments to gain their cooperation in preventing large numbers of migrants from crossing their territories along their path to the U.S. border. These policies proved effective. As recently as October of 2020 the government of Guatemala turned back a caravan of between 3,000 and 4,000 Honduran migrants headed north.

The Trump administration also concluded an agreement with Mexico, known as the Migrant Protection Protocols (MPPs) under which third country migrants seeking to claim asylum in the United States are required to wait on the Mexican side of the border to present themselves at a legal port of entry, rather than crossing the border illegally. The MPPs curtailed much of the chaos of 2019 when migrants crossed illegally, knowing that there would likely not be detained, and then released into the interior of the country.

Another policy change that curtailed the rampant abuse of political asylum policies was one that required asylum seekers to request asylum in the first country they arrived in after leaving their homelands, rather than waiting until they arrived in the United States to ask for protection. This move proved enormously effective at discouraging economic migrants from making false claims of political persecution.

While FY 2020 was generally an improvement over recent years, it ended on a somewhat disturbing note. September, the final month of the fiscal year, saw a sudden increase in illegal border crossings. September apprehensions numbered more than 57,000 – the highest September total since 2006. These increased numbers were likely driven by the devastating economic impact of the COVID -19 crisis in countries to our south.

Unlike the surge of 2019, which was made up mostly of family units (and groups of people who claimed to be family units) seeking to take advantage of policies that allowed those accompanied by children to enter, the increased flow at the end of FY 2020 was driven by single men, mostly looking for work. Moreover, while the 2019 surge was driven largely by migration from Central America, the growing flow of economic migrants amid the COVID crisis included a much larger contingent of Mexican nationals.

Another key difference between the surge of migration in 2019 and 2020 is that those who crashed the border during FY 2019 were arriving during a period of near full employment, while those arriving now are competing with a lot of American workers who have lost jobs due to COVID-19.