The Costs of Illegal Immigration on United States Taxpayers - 2013 Edition In September 2017, we released an updated version of this report also entitled “The Fiscal Burden of Illegal Immigration on United States Taxpayers”, click the button below for the most recent information.

This report estimates the annual costs of illegal immigration at the federal, state and local level to be about $113 billion; nearly $29 billion at the federal level and $84 billion at the state and local level. The study also estimates tax collections from illegal alien workers, both those in the above-ground economy and those in the underground economy. Those receipts do not come close to the level of expenditures and, in any case, are misleading as an offset because over time unemployed and underemployed U.S. workers would replace illegal alien workers.

With many state budgets in deficit, policymakers have an obligation to look for ways to reduce the fiscal burden of illegal migration. California, facing a budget deficit of $14.4 billion in 2010-2011, is hit with an estimated $21.8 billion in annual expenditures on illegal aliens. New York’s $6.8 billion deficit is smaller than its $9.5 billion in yearly illegal alien costs.

The report examines the likely consequences if an amnesty for the illegal alien population were adopted similar to the one adopted in 1986. The report notes that while tax collections from the illegal alien population would likely increase only marginally, the new legal status would make them eligible for receiving Social Security retirement benefits that would further jeopardize the future of the already shaky system. An amnesty would also result in this large population of illegal aliens becoming eligible for numerous social assistance programs available for low-income populations for which they are not now eligible. The overall result would, therefore, be an accentuation of the already enormous fiscal burden. 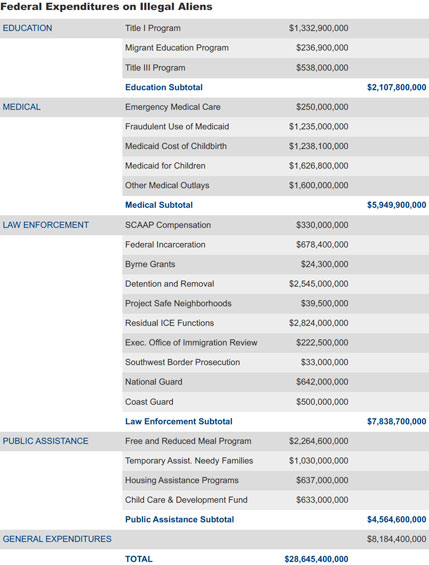 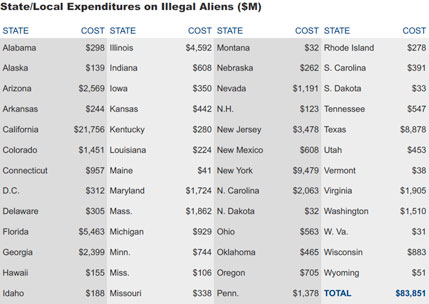 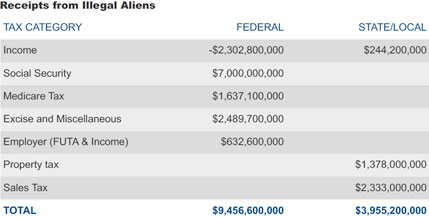 All studies assessing the impact of illegal aliens begin with estimates of the size of that population. We use a population of 13 million broken down by state.

In our cost estimates we also include the minor children of illegal aliens born in the United States. That adds another 3.4 million children to the 1.3 million children who are illegal aliens themselves. We include these U.S. citizen children of illegal aliens because the fiscal outlays for them are a direct result of the illegal migration that led to their U.S. birth. We do so as well in the assumption that if the parents leave voluntarily or involuntarily they will take these children with them. The birth of these children and their subsequent medical care represent a large share of the estimated Medicaid and Child Health Insurance Program expenditures associated with illegal aliens.

We use data collected by the federal and state governments on school expenses, Limited English Proficiency enrollment, school meal programs, university enrollment, and other public assistance programs administered at the federal and state level. Estimates of incarceration expenses are based on data collected in the State Criminal Alien Assistance Program in which state and local detention facilities seek federal compensation for the cost of detention of criminal and deportable aliens. Estimates for other administration of justice expenditures are based on data collected from the states by the U.S. Department of Justice. General government expenditures are estimated for other non-enumerated functions of government at both the federal and local level. An example would be the cost of fire departments or the cost of the legislature.

The tax collections from illegal aliens assume eight million illegal alien workers, one-half of whom are in the underground economy. Those in the above-ground economy are assumed to have an average family income of $31,200 (60 hr. workweek @ $10/hr.) with two children.

The report notes that today’s debate over what to do about illegal aliens places the country at a crossroads. One choice is pursuing a strategy that discourages future illegal migration and increasingly diminishes the current illegal alien population through denial of job opportunities and deportations. The other choice would repeat the unfortunate decision made in 1986 to adopt an amnesty that invited continued illegal migration.