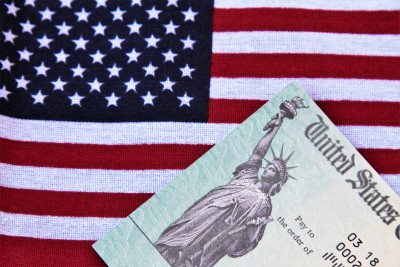 After several unseemly delays as Congress squabbled over numerous pork barrel provisions in the $2.2 trillion CARES Act, desperate American families finally began receiving assistance checks in mid-April. Those stimulus checks are limited to those who filed tax returns using valid Social Security numbers (SSNs), but not those who filed with Individual Taxpayer Identification Numbers (ITINs). Illegal aliens who file tax returns (generally because they are eligible for refunds or tax credits) do so using ITINs, meaning that they cannot claim benefits under the CARES Act.

These restrictions have not sat well with illegal aliens, their advocates, and far left members of Congress. Those members of Congress are aiming to rectify what they see as a great injustice. “I was appalled to learn hardworking, taxpaying immigrants were left out of the $2 trillion CARES Act. These taxpayers work in critical sectors of our economy, like agriculture, and contribute greatly to our country,” complained Rep. Lou Correa (D-Calif.), who apparently did not read the bill before voting on it, and is oblivious to the important distinction between immigrants and illegal aliens. Legal immigrants are eligible for relief under the CARES Act.

To correct this “egregious error” Correa introduced the No Taxpayer Left Behind Act, which would make illegal aliens eligible to receive federal relief benefits. Correa is being backed by the usual suspects on the far left fringe of the House of Representatives. “Squad” leader Alexandrai Ocasio-Cortez (D-N.Y.) tweeted “Thanks to GOP, these checks will be cut off the backs of *taxpaying immigrants* who get nothing.” Likewise, Ilhan Omar (D-Minn.) “corrected” a headline in the New York Post which read, “‘Squad’ members want to make illegal immigrants eligible for coronavirus aid” by crossing out illegal immigrants and replacing it with “American taxpayers” in bold red letters. “There, fixed it for you,” she added.

Another bill authored by Rashida Tlaib (D-Mich.), called the Automatic BOOST to Communities Act, would provide $2,000 prepaid debit cards to everyone in the United States including, “non-citizens, including undocumented people, permanent residents, and temporary visitors whose stay exceeds three months.”

The illegal-aliens-pay-taxes argument is the most frequent justification that advocates use for demanding illegal aliens get relief checks. However, while illegal aliens do pay some taxes, their contributions fall well short of the costs of the benefits and services they and their families use, by about $132 billion annually.

Paying taxes does not make one a full-fledged member of American society or absolve people for having violated our laws. Paying taxes is a basic obligation for offsetting the costs of the services and benefits society provides (even if it is a small fraction of the actual costs), and is a legal obligation for everyone who earns money in the United States.

It is unlikely that these bills will make it to the floor of the Democratic-controlled House, much less be approved by the Republican-led Senate or be signed by the president. But they do signal the intent of the far left to push as hard as they possibly can to ensure that illegal aliens are included in subsequent relief legislation that might be considered by Congress as the COVID-19 emergency and its economic devastation linger on.

EFFORT TO HALT ALL IMMIGRATION ENFORCEMENT

While some lawmakers are fighting to gain federal relief assistance for illegal aliens, others are using the COVID-19 crisis as an opportunity to end virtually all immigration enforcement. (Many of these lawmakers were calling for abolishing ICE even before the pandemic.)

In April, Rep. Pramila Jayapal (D-Wash.) and Senator Cory Booker (D-N.J.) announced their bicameral introduction of the Federal Immigrant Release for Safety and Security Together (FIRST) Act. The FIRST Act calls for a total cessation of all immigration enforcement in the United States and would facilitate the release of thousands of detained illegal aliens throughout the country, regardless of their criminal history. They were joined by prominent members of the Senate (several of whom sought the Democratic presidential nomination), including Elizabeth Warren (Mass.), Kamala Harris (Calif.), Bernie Sanders (Vt.), Kirsten Gillibrand (N.Y.), and Mazie Hirono (Hawaii).

The bill would require ICE to cease all immigration enforcement except against the most violent and dangerous criminal aliens. Incredibly, the bill prevents using pending criminal charges as a reason to justify detention. It states that the Secretary of Homeland Security “may not justify the redetention of a covered individual solely based on the fact that the individual has a criminal charge pending against him or her; or was convicted of a crime more than 5 years previously.”