The very first bill the Biden White House sent down Pennsylvania Avenue was the U.S. Citizenship Act, which proposes a sweeping amnesty for some 14.5 million illegal aliens (plus an untold number of illegal aliens who have already been deported), and massive increases in new immigration.

While massive amnesty bills and across-the board immigration increases are nothing new – we saw them under President George W. Bush and the Gang of Eight bill under President Barack Obama – what immediately stands out in the Biden bill is that there is not even a pretense of future immigration enforcement. None. In return for the biggest amnesty in history and a jobs-killing increase in new immigration, the American public does not even get the usual empty promises that we will not be inundated with large-scale illegal immigration in the future. 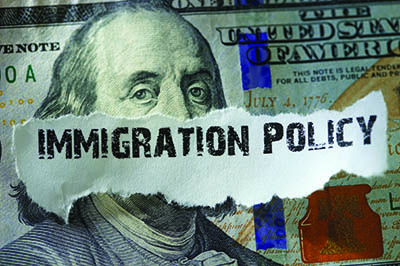 In his statement to Congress, President Biden asserts, “The bill provides hardworking people who enrich our communities every day and who have lived here for years, in some cases for decades, an opportunity to earn citizenship.” The hardworking, community-enriching people to whom he refers are not law-abiding Americans (many of whom are struggling mightily), but millions of people who broke our laws. Among the highlights of the Biden U.S. Citizenship Act, according to the White House summary:

A roadmap to citizenship for undocumented individuals. “The bill allows undocumented individuals to apply for temporary legal status, with the ability to apply for green cards after five years… Applicants must be physically present in the United States on or before January 1, 2021. The Secretary of the Department of Homeland Security (DHS) may waive the presence requirement for those deported on or after January 20, 2017 who were physically present for at least three years prior to removal for family unity and other humanitarian purposes.”

Increases family chain migration. The bill would “deal with backlogs in family-based visas by backlogs, by recapturing unused visas from other categories, eliminating lengthy wait times, and increasing per-country visa caps. It also eliminates the so called ‘3 and 10-year bars,’ and other provisions…[T]he bill allows immigrants with approved family-sponsorship petitions to join family in the United States on a temporary basis while they wait for green cards to become available.”

Warns immigration law enforcement not to do their jobs. “The bill provides funding for training and continuing education to promote agent and officer safety and professionalism. It also creates a Border Community Stakeholder Advisory Committee, provides more special agents at the DHS Office of Professional Responsibility to investigate criminal and administrative misconduct, and requires the issuance of department-wide policies governing the use of force.”

Makes U.S. immigration policy hostage to corrupt foreign regimes. As far as preventing future large-scale illegal immigration, the Biden plan calls for “addressing the root causes of migration.” According to the White House, “The bill codifies and funds the President’s $4 billion, four-year inter-agency plan to address the underlying causes of migration in the region, including by increasing assistance to El Salvador, Guatemala, and Honduras, conditioned on their ability to reduce the endemic corruption, violence, and poverty that causes people to flee their home countries.” While we’re all waiting for that to happen, the bill “creates safe and legal channels for people to seek protection, including by establishing Designated Processing Centers throughout Central America to register and process displaced persons for refugee resettlement and other lawful migration avenues—either to the United States or other partner countries. The bill also re-institutes the Central American Minors program to reunite children with U.S. relatives and creates a Central American Family Reunification Parole Program to more quickly unite families with approved family sponsorship petitions.”

Needless to say, FAIR will work vigorously with allies in Congress to oppose this legislation that attempts to grant mass amnesty and sacrifice the interests and security of the American public. FAIR will educate the American people about the legislation and mobilize public opposition. The Biden administration, along with an increasingly partisan and ideological media, will mount a full-scale effort to enact this damaging legislation in whole, or broken up into smaller components. FAIR will be counting on the active participation of members and supporters to block this audacious effort to sell-out the vital interests of the American people who would receive nothing in return.