In early January, a three-judge panel of the Fifth Circuit Court of Appeals removed the latest roadblock to the Trump administration’s efforts to secure the border. By a 2-1 majority, the Appeals Court granted the administration’s request to lift a lower court’s in- junction barring the president from using about $3.5 billion in Defense Department (DOD) money to secure the border by constructing additional fencing. The Fifth Circuit panel did not rule on the merits of the original lawsuit aimed at stopping the transfer of funds. Rather, it allows the administration to move forward with border wall construction while the case makes its way through the judicial process.

The Fifth Circuit cited a July 2019 ruling by the U.S. Supreme Court, which held that the president had the authority to transfer money earmarked for military construction projects for border wall construction. That 5-4 Supreme Court decision reversed a ruling by the Ninth Circuit upholding an injunction imposed by a federal district judge in California. 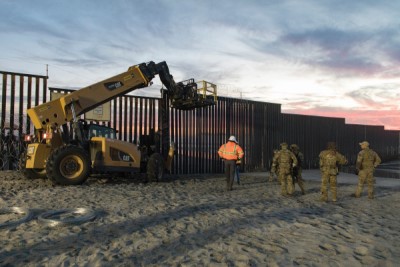 Buoyed by these important legal victories, the Trump administration quickly announced plans to tap an additional $3.7 billion from the Pentagon budget for additional border wall construction. The combined $7.2 billion is expected to fund construction of about 885 miles of new border wall by the spring of 2022. A little more than 100 miles of new fencing has been constructed by the current administration. However, with legal challenges to the project having been fought off, Acting DHS Secretary Chad Wolf expects construction to speed up significantly. “I can tell you that we remain confident that we are on track to 400, 450 miles that are either completed or under construction by the end of 2020,” Wolf said during a visit to the border in Yuma, Arizona.

While still inadequate to deal with the crisis along the southern border, the additional border security fencing is vital to protecting national security (which is why tapping Pentagon funds is legitimate) and deterring large-scale illegal immigration, drug smuggling and other illegal activities. The DOD dollars will be augmented by the nearly $1.4 billion Congress appropriated for border wall construction in December. In all, the money appropriated by Congress and the money used from the defense budget will bring total spending on the border wall to about $18.4 billion under President Trump.

Almost as important as granting the administration’s request to lift the lower court’s injunction, the Fifth Circuit questioned the legal standing of the plaintiffs to bring the lawsuit in the first place. “The Government is entitled to the same relief here for, among other reasons, the substantial likelihood that Appellees lack Article III standing,” noted the ruling.

Of course the primary intent of the lawsuits filed in California and Texas was to stall the administration’s efforts to construct additional miles of secure border fencing. Rather, the strategy of the lavishly- funded mass immigration lobby has always been to run the clock in the hope that the next election would bring them an administration more in line with their ideological viewpoints. Throughout his first three years in office, President Trump has consistently prevailed on the merits in lawsuits aimed at blocking his immigration enforcement efforts, but at the cost of valuable time.