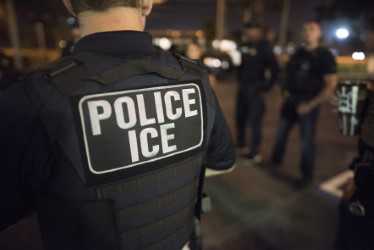 Letitia James and Bronx County District Attorney Eric Gonzalez. A similar injunction was imposed in 2019 by a District Court judge, Indira Talwani, in response to a lawsuit brought by local politicians in Massachusetts. The Massachusetts ruling is being challenged by the Trump administration, and it is likely that Judge Rakoff’s ruling will be as well.

Judge Rakoff’s sweeping ruling applies not only in the courthouses themselves, but also orders ICE not to execute arrest warrants in the vicinity of courthouses. Additionally, it prohibits law enforcement from even arresting those who are on their way to an immigration-related court proceeding.

The New York lawsuit, like the one in Massachusetts, is purely political. Under the Obama administration, ICE executed arrest warrants in courthouses without provoking lawsuits from local politicians. The Trump administration decided to expand the use of courthouse arrests in 2017 (the quantity of such arrests should be irrelevant in determining their legality). Moreover, ICE has voluntarily restricted (except in extraordinary circumstances) carrying out enforcement in schools, places of worship, and health care facilities.

Courthouses are a different matter, however. To state the obvious, courthouses are places that are dedicated to the enforcement of laws. Other law enforcement departments continue to make arrests, serve warrants and subpoenas, and engage in other types of enforcement activities inside courthouses. Every day, in courtrooms all over the United States, thousands of probation violators, parents who have failed to keep up with child support payments and litigants who have failed to comply with court orders are taken into custody.

They also provide the safest settings for both ICE officers making arrests, and for those being arrested. All courthouses bar weapons from the premises and everyone who enters these buildings must pass through metal detectors and have their bags inspected.

Courthouse arrests also protect the wider community. Executing a legally valid arrest warrant in a safe environment like a courthouse obviates the need for ICE to send agents into the community where others might be endangered. Particularly in light of recent events, any execution of law enforcement duties that minimizes the possibility of violent confrontation between officers and those being arrested should be encouraged, not shot down by activist judges.

While it is highly likely that the federal government will be successful in its appeal of both the New York and Massachusetts cases, the purpose of these suits and the rulings of activist judges accomplishes their primary goal of running out the clock on an administration that is making an effort to enforce immigration laws. While the appeals process is going on, deportable aliens — many with criminal records— will continue to avoid apprehension and removal.